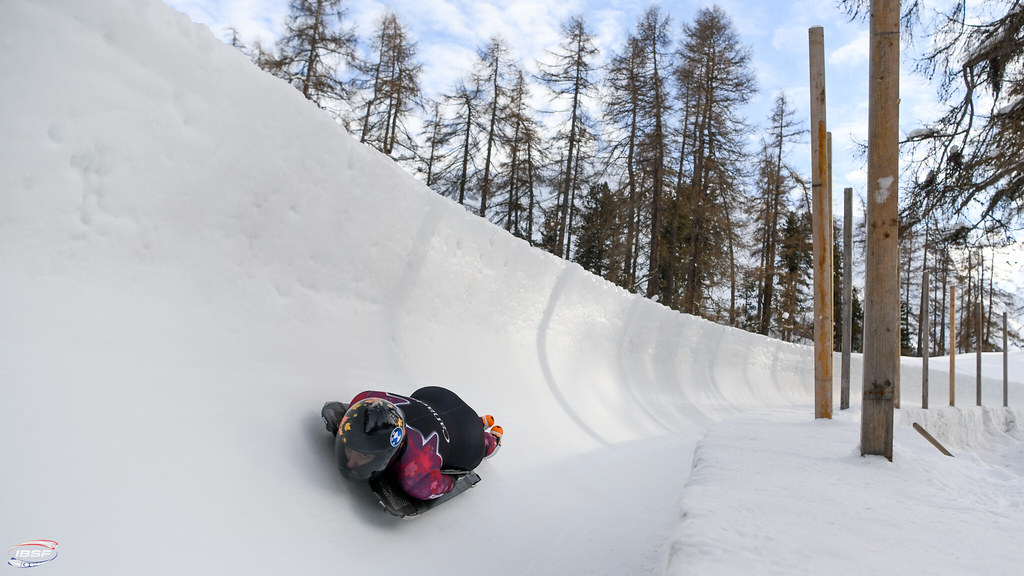 ST. MORITZ, Sui.—A new push start record on a snowy day at the historic track in St. Moritz, Switzerland was not enough to boost Canada’s Elisabeth Maier to her first World Cup podium of the season.

After posting a new start record at 5.24 and the third fastest downtime on the only naturally refrigerated track in the world, the 26-year-old Maier was hunting down her first World Cup podium since taking a year away from the sport on a maternity leave.

But a disappointing second blast down the 1,700-metre chute that winds its way to the finish in the town of Celerina left the 2018 Olympian in sixth place with a combined time of 2:21.89.

“My training and preparation did not show in today’s race. I did push the start record so that was definitely a positive,” said Maier, who has been steadily finishing in the top-six in her handful of starts this season.

Maier couldn’t maintain pace with the fastest women on ice. Germany’s Tina Hermann captured her first victory of the season with a time of 2:20.68. Austria’s Janine Flock was second at 2:21.00, while Germany’s Jacqueline Loelling placed stopped the clock at 2:21.54 for the bronze medal.

“These girls are just better (right now),’ claimed Maier, who has two World Cup podium finishes in St. Moritz throughout her career. “I’m not at their level. It’s just going to take some time and I need to be patient with myself which is hard.”

Fellow Calgarian, Jaclyn LaBerge, enjoyed a bounce-back week in just her second World Cup race of her career. After shaking off the first-race jitters last week in Winterberg, Germany, the 36-year-old LaBerge was solid in 11th spot at 2:22.94.

“Today felt amazing. Even though I didn’t think I was nervous last week, I was,” said LaBerge. “I love this track and felt I could do well. After last week, the race environment felt more familiar to me which helped the nerves. I knew I had to be extra quiet on my sled in St. Moritz so I built that into my visualization and focus for today.

“I wish I could have snuck into the top-10, but it was nice to be able to show my sliding capability and be in the mix.”

Kevin Boyer, of Sherwood Park, Alta., was the top Canadian male sliding to 18th spot at 2:19.19. Calgary’s Mark Lynch did not qualify for the second run with the top-20 sleds, placing 24th.

The World Cup continues on Saturday in St. Moritz when the bobsleighs take to the track.