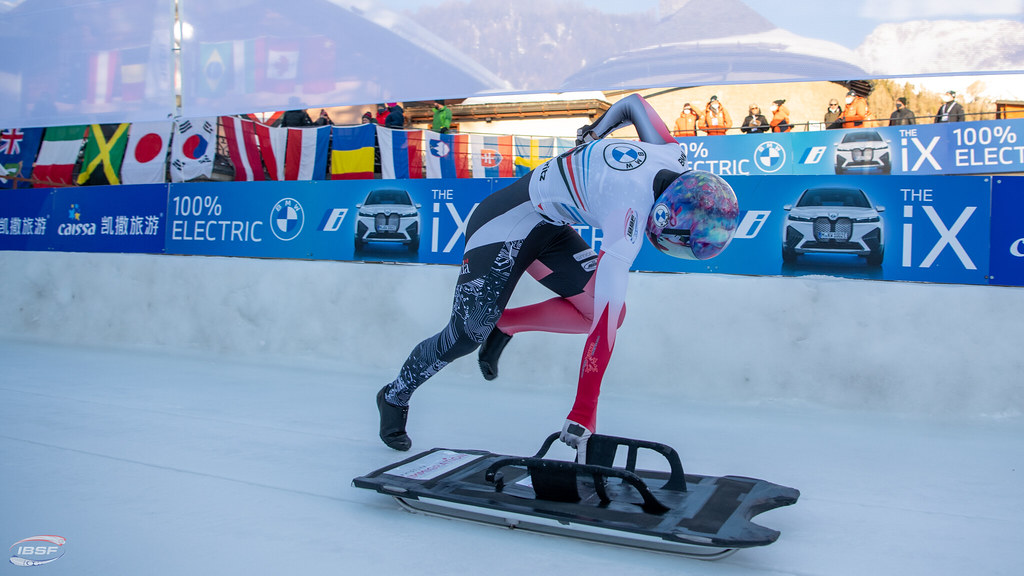 ST. MORITZ, Sui.—Canada’s Mirela Rahneva slid to the bronze medal in her final race of the skeleton World Cup seasn at the birthplace of the sliding sports in St. Moritz, Switzerland on Friday.

The 33-year-old Rahneva rocketed to the final spot of the podium after chalking up a combined time of 2:18.22 on the only non-refrigerated track in the world to secure her 11th World Cup medal of her career.

It was the second podium finish of the season for the Ottawa resident. Rahneva also won the bronze prior to the holiday break at a World Cup in Winterberg, Germany, which was her first podium in nearly two years. The double-medal triumph this season is demonstrating the work the 2018 Olympian has invested in working her way back into elite form after missing all of last year’s COVID-shortened season with a neck injury.

“The podium performance today is a really strong result for Mimi (Mirela Rahneva) on a track that she absolutely loves sliding on,” said Esther Dalle, team leader, Canadian Skeleton Team. “Mimi has done an incredible job this year working her way back from injury and has made tremendous progress. The entire goal is to peak at the Olympics and this result demonstrates she is on track.”

It was Rahneva’s third career World Cup medal on the stunning 1,700-metres of natural ice that winds its way to the finish in the town of Celerina. Two of her three World Cup victories came at the birthplace of the sliding sports 2019 and 2017.

“It feels really good. I love it at St. Moritz. I’m trying to figure out why it is exactly, so I can bring it with me to other tracks, but I think it is just the long straightaways and beautiful ice. It a privilege to slide here,” said Rahneva following her 2019 victory.

“I have a smile from the dressing room to the start line, and I keep that smile all the way. It is beautiful here. You are sliding in the middle of the forest. It is very peaceful and quiet. You just really get in the moment because it is so quiet,” she added at that time.

The Australians celebrated their first ever World Cup skeleton victory. Jaclyn Narracott clocked the top time in the opening run, followed by the second-fastest second-run time to secure the victory at 2:17.56.

Kimberley Bos, of The Netherlands, finished .06 seconds back in the silver medal spot on the podium at 2:17.62.

North Vancouver’s Jane Channell also battled her way into the top-10 with a solid, seventh-place finish. Channell mixed together two, top-four pushes with consistent runs to clock a combined time of 2:18.91.

In the men’s race, Calgary’s World Cup rookie, Blake Enzie, had the best race of his season with a 19th place finish. Competing in just his third World Cup race ever, the 20-year-old punched the clock at 2:16.55.

Latvia’s Martins Dukurs slid into the winner’s circle with a time of 2:14.39. The Germans grabbed the final two spots on the podium. Alexander Gassner locked up the silver medal with a time of 2:14.84, while Christopher Grotheer was third at 2:14.90.

Bobsleigh Canada Skeleton will be nominating its Olympic skeleton roster to the Canadian Olympic Committee on January 20.

The women’s monobob and two-man bobsleigh races will slide into the spotlight in St. Moritz on Saturday.