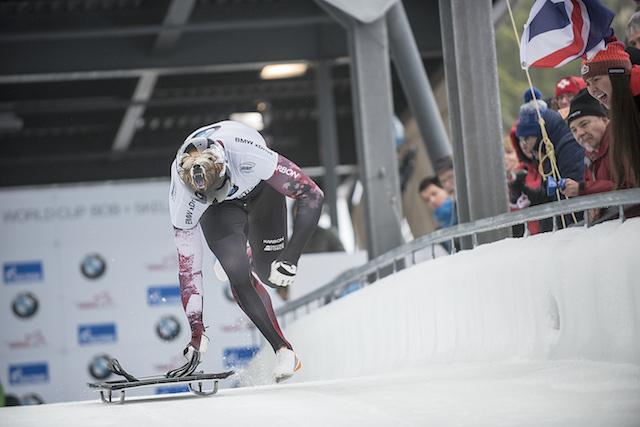 WINTERBERG, Ger.— Dave Greszczyszyn became just the sixth Canadian male to win a World Cup medal in skeleton since the sport made its Olympic debut in 2002 after winning the bronze on snowy Friday in Winterberg, Germany.

“I’ve been working towards this day since my first season in 2008. I came close two weeks ago in Whistler, and it didn’t work out. I stayed focus on the plan, had good training every day this week, and I put the runs together slowly to figure my way through every corner down this track,” said Greszczyszyn. “I picked a pair of runners I felt confident in and followed the game plan to push as hard as I could to the crest of the hill and let my bodyweight and driving do the rest.”

Nicknamed “The Grizz,” the 38-year-old Canuck roared to a personal best time of 56.88 in the one-run race which was cancelled due to heavy snow blanketing the 1,330-metre track and the German resort town.

“When I crossed the finish line, I looked up and thought I saw 15th. I looked again and realized I was third so was quite happy,” said Greszczyszyn, whose previous best finish was a fifth-place result last year in Whistler. “There were still a lot of athletes to go. I went back to the start and relaxed, tried to visualize, keep loose and stay focused.

“It was snowing off and on all day from the start of the women’s race. I just thought whatever happens will happen today. They delayed the start of our second run I think three times and I didn’t know if the second run was going to happen. I was ready to repeat that first run, but they finally cancelled it. I’ll take it.”

The Grizz was charging towards his first career medal two weeks ago when he sat in the same third-place position after his first rip down the Whistler Sliding Centre track. But luck wasn’t on his side that day when he eventually dropped to seventh place.

“I thought Whistler was my chance and was going to be my day. It was my home track. I was sitting in third, and others made mistakes. I thought that was it, but it didn’t work out,” said the Brampton native. “I learned a lot from being in that position in Whistler. I also have had good results here (Winterberg) racing Europa Cups, Intercontinental Cups and also at World Champs when I was seventh after the first run,” said Greszczyszyn.

“Using Whistler and my previous results here gave me the confidence to know my abilities are there, and I have to take what comes with the sport. I felt if I had a good push, some decent lines down the track and tried to push the limits of the sliding I could be there in the top-six. I stayed focused and calm all day and, well, I got a top-three.”

It was the first medal for the Canadian men’s skeleton program on a highly-talented World Cup circuit since John Fairbairn claimed the bronze four years ago in St. Moritz.

“This is pretty cool because that was my first year sliding World Cup when Fairbairn got that medal. I knew on that day, I had the potential to do this too, and that the program does have some depth,” added The Grizz. “Things went the way they did and this Olympic quadrennial has been a struggle on the men’s program.

“But we have heart, along with trainers and coaches who believe in us, and we believe in ourselves. We work hard helping each other out every day and the girls help us too. Together we are Bobsleigh Canada Skeleton. We are back on the map – even though in our minds we never really went anywhere – and that feels pretty awesome.”

Greszczyszyn’s World Cup teammates, Kevin Boyer (Sherwood Park, Alta.), and Barrett Martineau (Calgary) also suited up on Friday. Boyer matched his career-best 12th-place finish on the World Cup after clocking a time of 57.43. The snow got the best of Martineau, dropping the Canadian into 28th spot at 58.46.

A substitute teacher when he is not rocketing down icy chutes around the world in pursuit of his Olympic dream, Greszczyszyn reflected on the golden lesson he’d share with his students if he was in the classroom today.

The World Cup continues on Saturday in Winterberg, Germany with the two-man and women’s bobsleigh races.