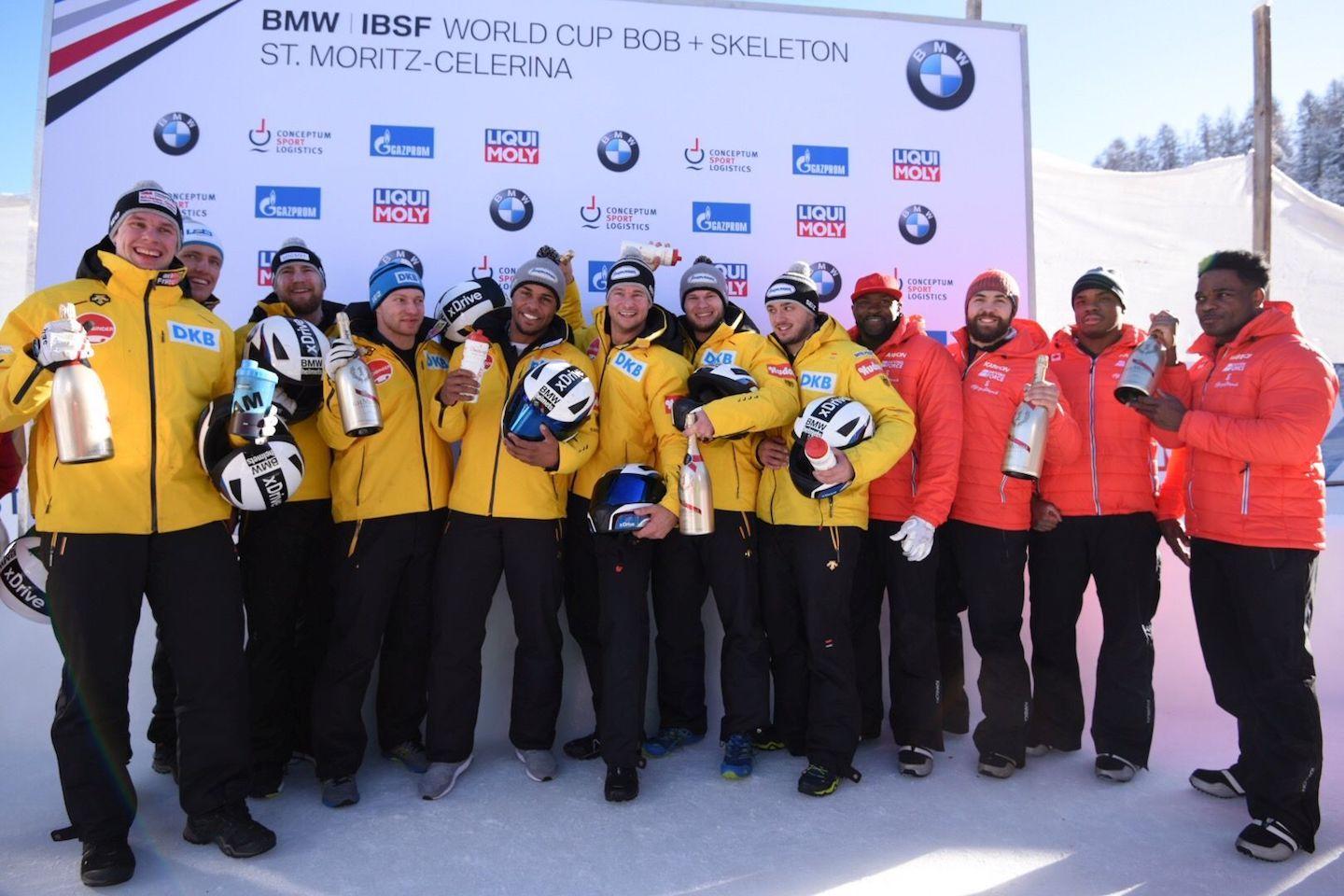 ST. MORITZ, Sui.—Chris Spring’s four-man crew popped the champagne in celebration of their second four-man bobsleigh podium of the season, winning the bronze on the history rich track in St. Moritz, Switzerland on Sunday.

Spring and fellow Calgarian Lascelles Brown teamed up with two Edmontonians, Bryan Barnett and Neville Wright, to squeak out a third-place finish with a time of 2:08.95. It was Spring’s first career medal on the 1,700-metre piece of art on ice where the sport originated.

“I have always had a good feeling on the track here, and I feel like I’ve been unlucky not to podium before so I’m happy to have medalled today on such a historic track,” said the 33-year-old Spring. “It’s special here every year. The mountains have this feeling for me of being just like Whistler, so I feel a bit at home here.”

It was the second four-man medal of the season for Team Spring, and fourth in the featured bobsleigh event of his career – all bronze. He was third with a different crew in Park City, Utah prior to the holiday break.

“Confidence is a massive factor in our sport, especially at the top end so I’m happy to go into the last World Cup with this momentum,” added Spring, who also has a gold and silver medal in two-man action this year.

Germany’s Johannes Lochner, Sebastian Mrowka, Joshua Bluhm and Christian Rasp slid into the winner’s circle with a time of 2:08.42. Francesco Friedrich, Candy Bauer, Martin Grothkopp, and Thorsten Margis, also of Germany, snagged the silver medal with a time of 2;08.56.

The Canadian team is carrying a lot of momentum while edging closer to the 2018 Olympic Winter Games. Team Spring’s bronze brings the Canadian bobsleigh squads medal haul to 14 on the season, with multiple sleds winning in all race disciplines. Sunday’s triumph was Spring’s ninth career World Cup medal in both two- and four-man racing.

“The guys on the team are so hungry, and not just my boys. Olympic selection is no joke and everyone is fighting for a spot. If we could take everyone we would, but unfortunately, there will be boys left off the Olympic Team and that’s heartbreaking because each and every one of these guys deserve to be there. Without all of them I wouldn’t be in the position I am in,” said Spring.

The final World Cup of the season is set for Konigssee, Germany, January 19-21. Bobsleigh Canada Skeleton and the Canadian Olympic Committee will announce the bobsleigh and skeleton athletes heading to PyeongChang on January 24th at a media conference in Calgary.