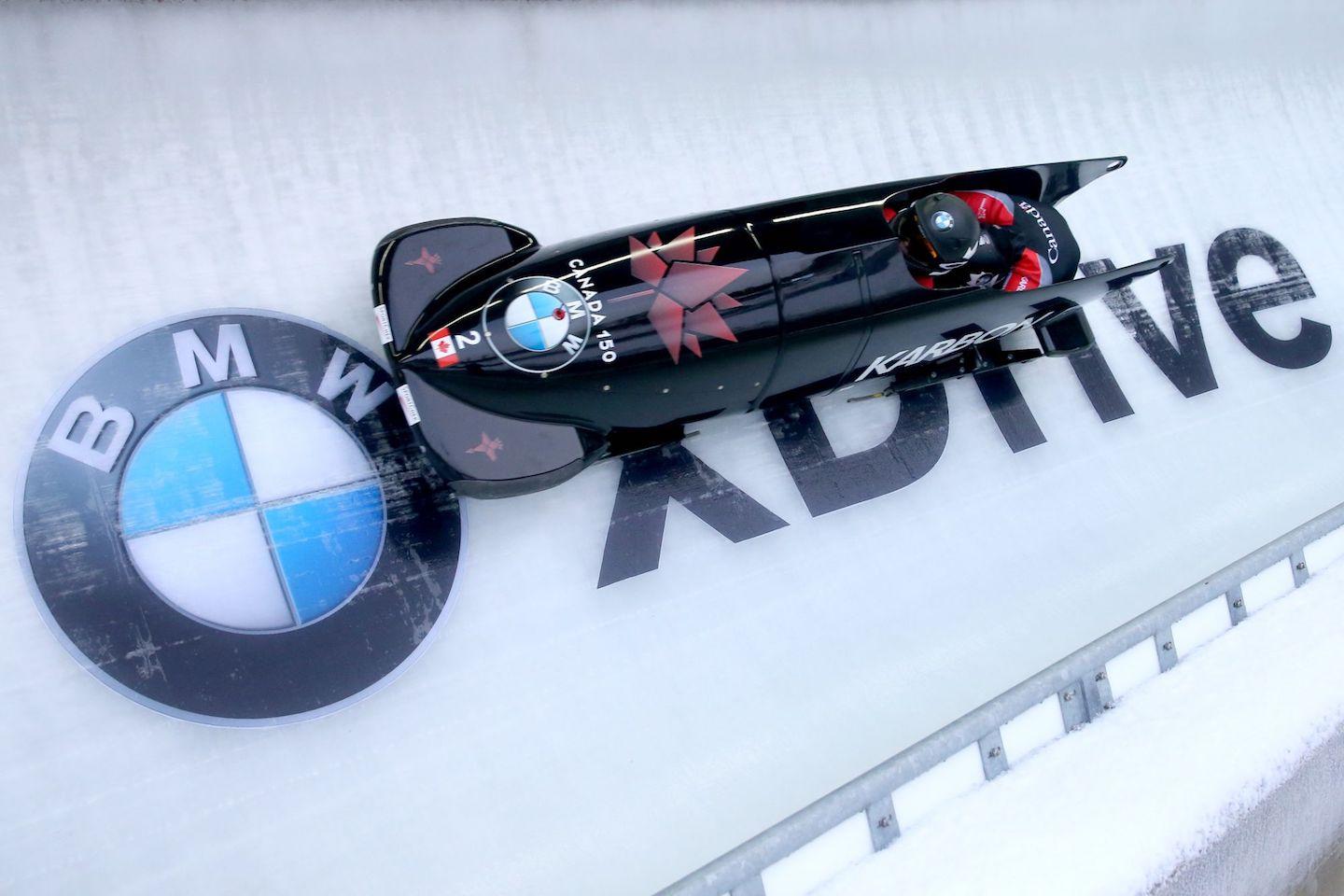 KONIGSSEE, Ger.—Canada slid to the top of the mountain, and into the history books, by winning the overall World Cup titles in both men’s and women’s bobsleigh on Saturday in Konigssee, Germany.

It is just the second time ever in bobsleigh history that Canada has finished on top in both men’s and women’s action in the same season. Humphries and Lyndon Rush both finished first in 2013.

“Winning the overall is absolutely huge,” said the 31-year-old Kripps, who now has nine career podium finishes in two-man racing along with a silver medal at last year’s World Championships. “It’s been a dream of mine since I started driving. I’m really proud of both Alex (Kopacz) and Jesse (Lumsden) who both pushed very well to share the two-man workload. It’s incredible we didn’t finish worse than fourth the whole season.”

Kripps, of Summerland, B.C., battled from fourth spot after the first heat to climb onto the podium for a fifth time this year and claim the bronze medal. Four of those podium finishes came with Kopacz  (London, Ont.) on the brakes. The Canadian duo clocked the second fastest down time in the final heat to post a third-place time of 1:39.41.

It was Kripps’ third two-man medal in Konigssee. His first career podium came on the German track in 2014 when he won the race just prior to the Sochi Olympic Winter Games. He also slid to a bronze medal in 2015 on the 16-corner track.

“The Konigssee track is pretty unique. It is quite rhythmic, and I really enjoy driving it,” said Kripps. “Today was good all around. We had top starts in both runs. I made some mistakes in the first run, but managed to clean it up for the second run to snag a medal.”

The Germans grabbed the top-two spots on Saturday’s podium. Francesco Friedrich and Thorsten Margis set the time to beat at 1:38.97. Johannes Lochner and Christopher Weber clocked-in at 1:39.37 for the silver.

Hamilton’s Nick Poloniato and Edmonton’s Neville Wright finished 10th (1:40.19). Calgary’s Chris Spring held on for third place in the overall standings after teaming up with two brakemen Saturday – Edmonton’s Bryan Barnett and Cam Stones, of Whitby, Ont. – for 17th at 1:40.32.

Meanwhile, Kaillie Humphries slid to her fourth career World Cup title after winning the silver medal in the women’s race with Phylicia George.

“I am really happy to win the overall title and get that Globe again. To be consistent over eight races to me proves it is not just about one track. It tells me that  I can perform on any track and that gives me a lot of confidence in my ability and performance,” said Humphries, who had both George and Melissa Lotholz on her sled this year.

“Phylicia gets better each race and that is great to see. It has been a long road for Melissa. She has grown so much the last couple of years. Winning the overall is nice to see the hard work all of us have put in pay off.”

Calgary’s Humphries and George, of Markham, Ont., moved up one spot on the podium in the final heat after posting a combined time of 1:41.64.

“The first step (of the mission) is accomplished,” said Humphries. “It was good today. The first push was the closest I have been to Elana this whole quad. We were consistent, and I was happy with the drives. That is very promising.”

It was the 48th career World Cup podium for the 32-year-old Humphries to go along with her four World Championship and two Olympic medals.

Posting the third fastest start times in both heats, it was the second career podium for the 30-year-old George in just her fourth World Cup race ever. An Olympic hurdler, who joined the Canadian bobsleigh program last year from the world of athletics, also pushed Humphries to a gold medal two weeks ago in Altenberg.

“I think overall Phylicia and I balance each other out. She’s got the speed, I have the strength and that’s kept us closer to the top teams at the start,” said Humphries. “There’s lots of work to do. She’s still very new, but it is definitely coming. She shows up on race day and knows how to get the best of herself. She rises to the occasion every time and that feels really nice. We treat performance similarly and are determined to progress and move forward.”

Germany’s Stephanie Schneider and Annika Drazek won the women’s race with a time of 1:41.35. American’s Elana Meyers Taylor and Lauren Gibbs settled for the bronze at 1:41.67.

Edmonton’s Alysia Rissling was eyeing down her first podium of the season with Heather Moyse, of Summerside, P.E.I. The dynamic duo was one spot behind their Canadian mates in fourth after the opening heat but dropped one spot after their final trip down the 1,251-metre track to finish fifth with a time of 1:41.98. It is the second-straight top-five finish for Team Rissling who were fourth last week.

Canada’s bobsleigh squad racked up a total of 16 medals this year in women’s, two-man and four-man action. The World Cup season wraps up on Sunday in Konigssee with the four-man bobsleigh race.

“It is a great to see the success of the entire team,” said Humphries. “As a team we’ve been on the road together for a long time. You learn how work and live and thrive with your teammates. It is nice when times are good and things seem easy – that is infectious for sure. You see these athletes work so hard day-in-and-out and you can’t help but be happy to see them have success, and in turn, it inspires me to be better and achieve my dreams too.”