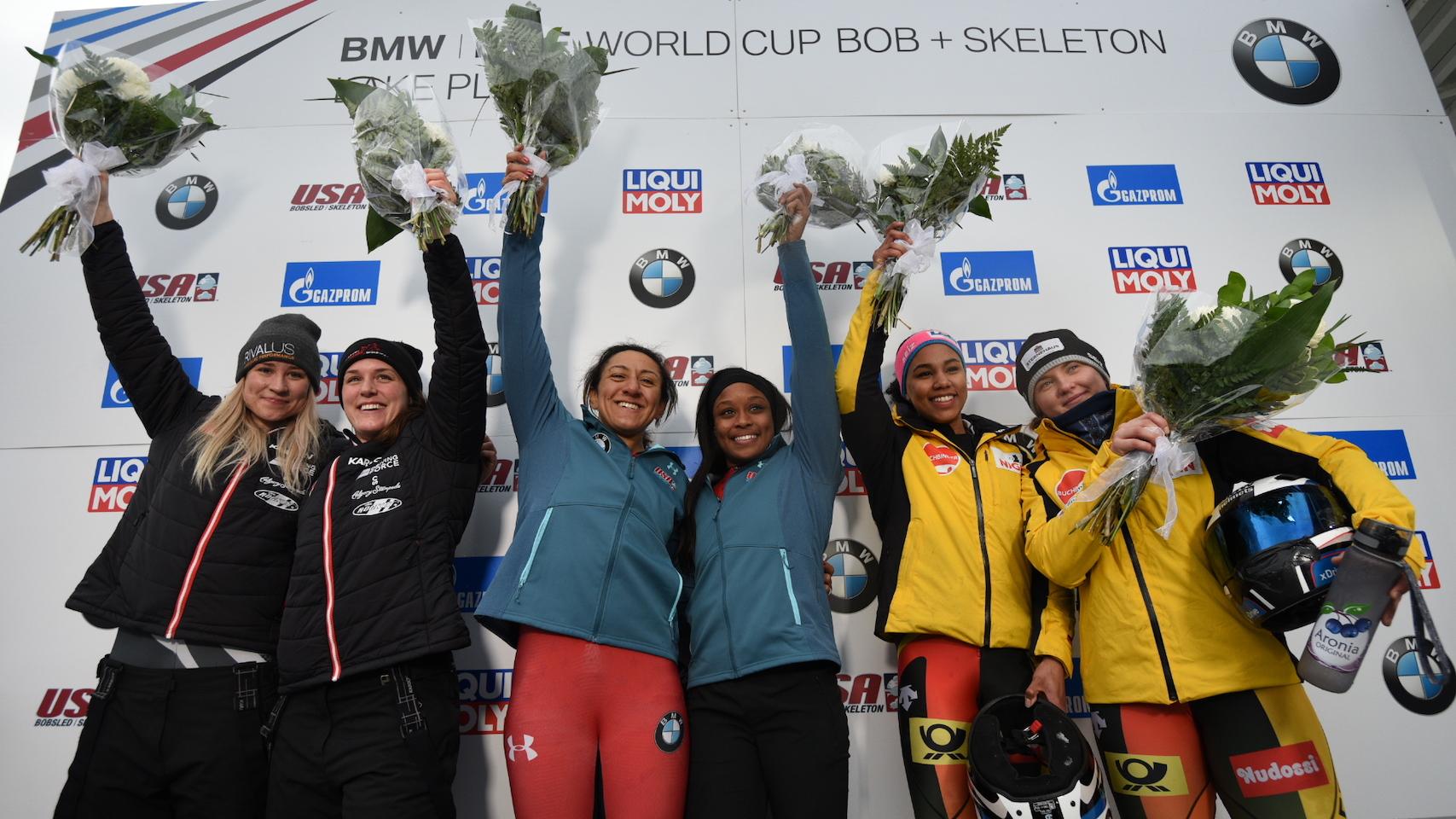 Racing for the first time together since breaking through to win their first career World Cup medal with a silver last month in Altenberg, Germany, de Bruin (Stony Plain, Alta.), and Bujnowski (Mount Brydges, Ont.) reunited on the silver-medal step of the podium once again at the bottom of Mount Van Hoevenberg -  the site of the 1980 Olympic Winter Games.

The Canadian duo locked up second spot with a combined time of 1:55.17.

“I felt pretty confident heading into the race,” said the 29-year-old de Bruin, who was a seventh-place finisher at the 2018 Olympics. “This is my favourite track. I love the flow of it. We had good training runs all week. I knew that if we could do the same in the race, we could achieve this result. We went out today and executed.”

The Canadians rocked the third-fastest start and down times in both runs down the 1,455-metre chute which winds through the Adirondack Mountains.

“The track was a bit frosty today, but both runs were smooth,” said de Bruin, who added she has been working on building on her confidence since debuting at the 2018 Olympic Winter Games. “I have really been focused on going out and just having fun. (Kristen) helps take a lot of that pressure away at the start line.

“She is excelling in this sport in just her second year, and is great to have with me at the start line. She is so chill, we give each other a smile, and then go do our thing down the track.”

Nicknamed “Booj” by her teammates, the 26-year-old Bujnowski has been an instant hit since joining the Canadian Bobsleigh Team last year, playing a key role in the positive team-oriented culture that is at the core of the national program.

An alternate at the 2018 Olympic Winter Games where she soaked the experience in, the former track and CrossFit athlete has been a beast at the start line where she has emerged as one of the top brakemen in the country. Bujnowski brought the heat again on Friday for her second career podium.

“It wasn’t a complete surprise. We really felt we had a good shot here to get on the podium,” said the composed Bujnowski. “I thought we performed well at the start. The goal is always to surpass what we do in training and we definitely did that today. Both pushes were competitive, and we executed the way we needed to.”

Bujnowski found immediate chemistry with de Bruin when they raced together for the first time in January, and captured the silver medal in Altenberg.

“I think we support each other really well – both mentally and physically,” said Bujnowski. “We respect each other as athletes and there is now question in our minds that we are going to perform well together.”

The Canadians finished .38 seconds behind Americans Elana Meyers Taylor and Lake Kwaza who set the golden standard at 1:54.79. Germany’s Stephanie Schneider and Deborah Levi, who had the lead heading into the final heat, held on for the bronze medal with a time of 1:55.27.

Justin Kripps and Cam Stones battled to their third two-man bobsleigh medal of the World Cup season after winning the bronze Friday night on the highly-technical 20-corner track in Lake Placid.

The reigning Olympic two-man champion, Kripps (Summerland, B.C.) and Stones (Whitby, Ont.) battled to third place with a time of 1:52.65. It was the 11th career World Cup two-man podium for Kripps to go along with his World Championship silver medal and Olympic title.

“That was pretty crazy. I wasn’t expecting that after that first heat,” laughed Kripps, who was juggling phones to take a Facetime call from his mom back home in Summerland, B.C. after hopping off the podium.

Struggling to seventh-place after the first run down the Lake Placid track, the Canadians cleaned things up in the final heat where they put down the second-fastest time to secure the final spot on the podium.

“I made a mistake in corner three and didn’t fix it in time, so I think we bled some time the whole way down the track,” added Kripps.

“I just remembered going back to the start block again that in bobsleigh anything can happen. The second run we put down a pretty good one. I wasn’t expecting to move up that much because it felt so slow compared to training, but the ice was the same for everyone and the other sleds were slow too.”

Kripps has slid onto the Lake Placid podium in each of the last three years. He won the silver in his previous two starts.

“I just love the track here. I have such a good feeling for it. I do prefer when it is cold and hard, but today showed we can get it down when it warm and frosty ice too,” he added.

The Canadian duo took the final step onto the podium following a crushing final run by the leader of the first heat – Germany’s Johannes Lochner and Christian Rasp.

Kripps and Stones have walked away with a medal around their necks in three of the four two-man races they have entered this season. They captured silver medals in both Altenberg and Konigssee. The leaders of the Canadian men’s squad were fourth in Igls, Austria – the only time they finished outside of the medal standings.

“Winning medals is fun. Fortunately, we have had some success this year and that is exciting. It feels great to get the nod each week for Justin’s sled, and I don’t take that for granted,” said Stones. “I know the whole team (of brakemen) are pushing so well, and all three of our pilots are deadly, so we are going to continue to work together and push each other. We are having a lot of fun together, and just really happy to pull that one out today.”

Germany’s Francesco Friedrich and Thorsten Margis remained unbeaten in the seven races of the 2018-19 season, sliding into the winner’s circle with a time of 1:52.35.

Romain Heinrich and Dorian Hauterville, of France, were second at 1:52.63.

Canada’s Chris Spring (Calgary) and Neville Wright (Edmonton) had a solid return to World Cup racing. The Olympic veterans punched the clock at 1:52.82 for sixth place.

Coming off a victory in St. Moritz, Switzerland, the Ottawa native clocked top-three start times in both heats to propel her to a fourth-place overall time of 1:51.19.

“The last couple of races have been really well executed and it’s all starting to click,” said Rahneva. “My confidence is growing heading into two home ice races in Calgary and then Whistler for World Championships. I’m going to stay positive, continue to learn and explore what our program can achieve.”

The 30-year-old Rahneva was in fifth place after her first blast down the 1,455-metre track. She climbed one more spot in the standings before the dust finally settled at the finish line. Rahneva’s first of six World Cup medals came in Lake Placid two years ago when she was third.

Kendall Wesenberg, of the United States, slid to the final step of the women’s skeleton podium at 1:51.10.

North Vancouver’s Jane Channell grabbed the final spot in the top-10 with a two-run time of 1:52.00. Calgary’s Madison Charney was 16th in her first World Cup start of the season at 1:53.27.