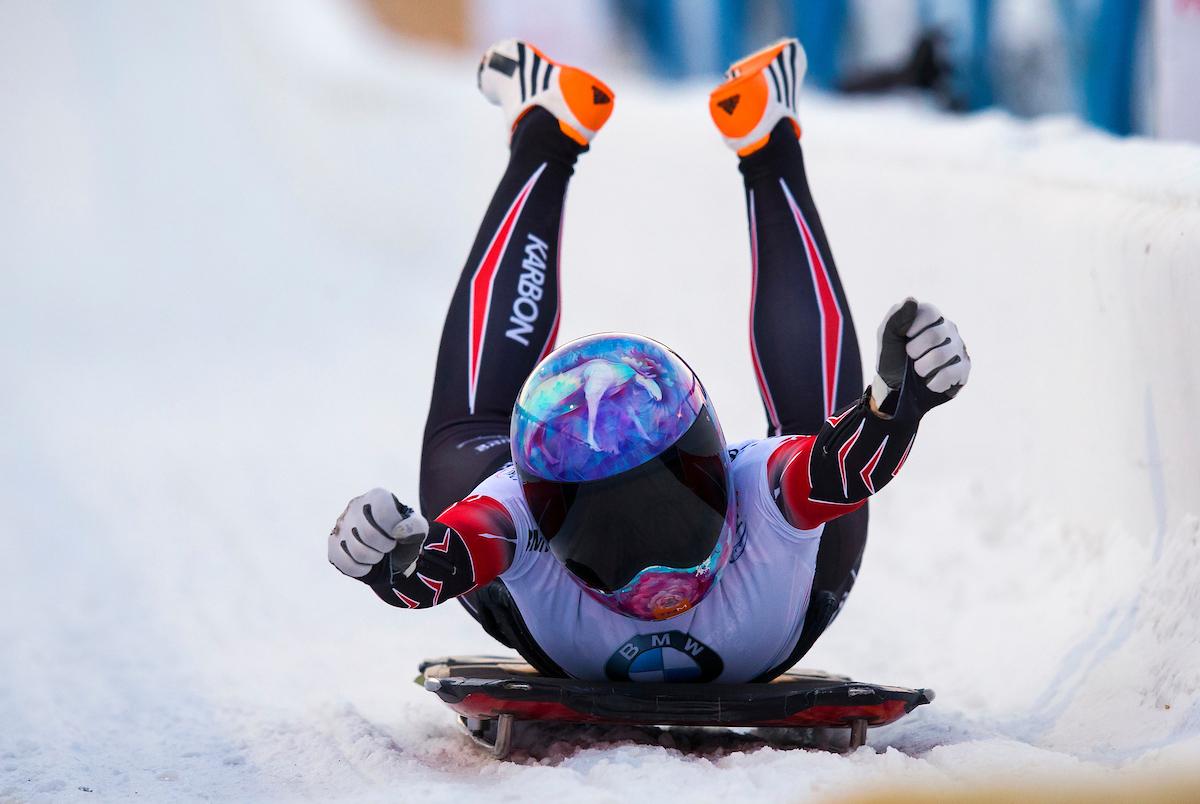 CALGARY—Canada’s Mirela Rahneva and Elisabeth Maier shared the international skeleton podium for the second time of their careers, winning the gold and bronze medals on Friday at the BMW IBSF World Cup Bobsleigh and Skeleton in Calgary, presented by the Calgary Stampede.

Ottawa’s Rahneva dominated both heats on the 14-corner Olympic Track, finishing with a golden time of 1:54.52. Calgary’s Elisabeth Maier battled to a bronze medal at 1:55.20.

“This is amazing. It is a track that we know and love, and it is just such a good feeling to be sliding here,” said Rahneva, who was competing in her first ever World Cup race in Calgary.

“The track crew did an incredible job of making the ice nice and smooth despite the cold weather we’ve had here. It felt so good to be on home ice.”

It was the seventh World Cup medal for the 30-year-old Rahneva, and third victory of her career.

Both of the former wedding planner’s other two wins came in St. Moritz, Switzerland. Struggling early in the season, Rahneva celebrated a breakthrough in January when she slid to the top of the podium at the birthplace of the sport one month ago.

“The year of the Olympic Games is a bit of an experimental time. We were trying new things with equipment and training and now getting into the groove and dialing it in heading into the World Championships in Whistler which is where you want to have the momentum,” said Rahneva, who was fourth last week in Lake Placid.

Rahneva and her Olympic teammate, Maier, also shared the World Cup podium one year ago in Igls, Austria where they finished second and third – a memory that provided extra motivation for Maier in the offseason.

“We were all in a bit of a lull this summer, lacking a bit of motivation coming off the Olympic year. I texted Mimi (Mirela) and told her what is working for me is I loved sharing the World Cup podium with her and wanted to do it again,” said Maier.

It was the 12th World Cup medal in the five-year career for the 24-year-old Maier. She also slid to a silver at the season-opener this year in Sigulda, Latvia.

Maier was sitting in fourth spot after her first blast down the 1,494-metre track. She scrapped her way into podium position on the second run.

“Thinking of sharing the podium has been a bit of an extra driving force for me so it was really cool I was able to move up from fourth to third today,” added Maier, whose first World Cup win came in Calgary during her rookie season in 2014 – the only other time she competed at the elite level on the icy chute in the Stampede City.

Sandwiched between the two Canadians on the podium was Germany’s Tina Hermann at 1:54.98.

North Vancouver’s Jane Channell completed the dominant performance by the Canadian speed queens, posting a season-best fifth-place finish of her own. Sitting in sixth spot after the first heat, the 30-year-old Channell put down the third-fastest final run time to secure fifth at 1:55.45.

The trio of women set the tone for the Canadian men’s race. Dave Greszczyszyn, of Brampton, Ont., matched his career-best sixth-place World Cup finish in Calgary. The 39-year-old Olympian put down his top-two runs of the season to finish with a time of 1:52.44.

Friday’s competition was a makeup race for a previously-scheduled World Cup in Konigssee, Germany that was canceled in January due to heavy snow. The world’s best skeleton women will be back on the track in Calgary Saturday morning at 9 a.m. MTN for the final World Cup race of the season.

It is the first time in four years the BMW IBSF World Cup has made a stop in Calgary. The Canadians did their part to try ensuring it wouldn’t be the last.

“The track in Calgary is going through a bit of a rough time but I think these results show the importance of this track for Canadian athletes,” said Rahneva, who pumped her fists and screamed ‘Save Our Track’ after locking up the gold medal.

“All of our lives in the sliding sports are centred around this track . Many of us have moved to this city to be close to this track which is also such an important part of the Olympic legacy that kids, athletes and tourists from all over the world use.”

Calgary will be in the international sliding sport spotlight throughout the weekend. Partnering with the Calgary Stampede, Canada’s bobsleigh and skeleton athletes will look to turn up the heat in Calgary with bands, family activities, a mechanical bull and a whole lot more during two full days of racing. Event details: http://www.bobsleighcanadaskeleton.ca/en/events/wcc/