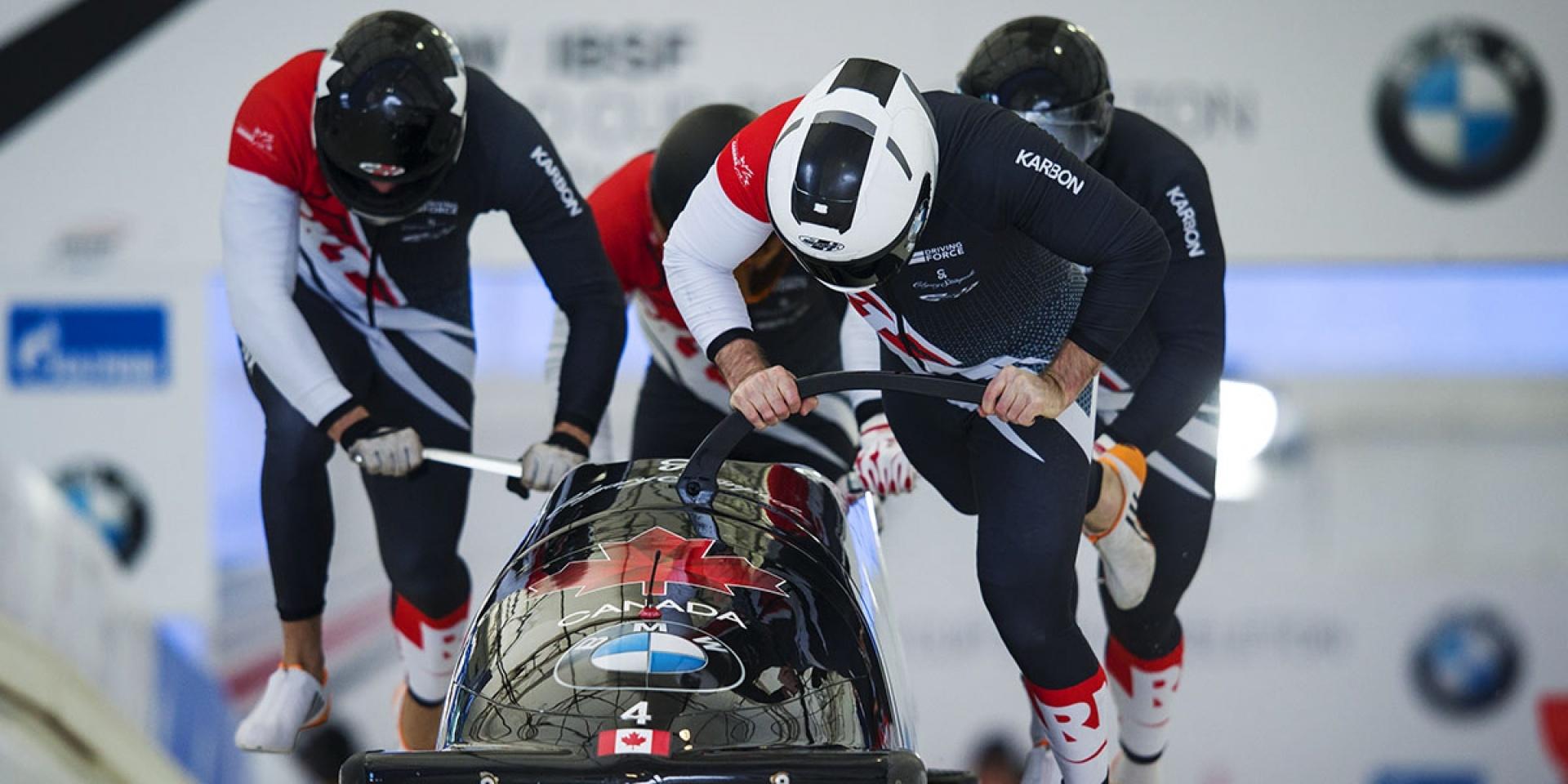 WHISTLER, B.C.—Justin Kripps slid into the history books as just the third Canadian in the 78-year history of the BMW IBSF Bobsleigh World Championships to reach the two- and four-man podiums in the same year following a bronze-medal triumph on Saturday night.

Canada’s reigning Olympic two-man champion, who along with Cam Stones claimed the two-man silver last week, drove to the first World Championship four-man podium of his career on home ice at the Whistler Sliding Centre.

“It is amazing. I was happy to get the two-man medal, but it is even sweeter in the four-man,” said Kripps. “I’m so happy to be able to spread the love around. These four-man guys have such a huge impact on the two-man results so to reward them with this is massive.”

It is the first time in 12 years that a Canadian crew has reached the four-man podium at the most prestigious event in a non-Olympic year. Kripps’ former teammate and first driving coach, Pierre Lueders, was the last to win a World Championship four-man medal when he slid to the silver in 2017 at the birthplace of the sport in St. Moritz, Switzerland.

Team Kripps was in second place after their first trip down the 16-corner icy chute but dropped to third after Friday’s second run that saw the top-five sleds separated by fractions of a second.

“In the third run I came attacking pretty hard. I wanted to win the race, so I made it a bit risky and really went for it. I was great for 12 corners and then it got a bit hairy,” said the 32-year-old Kripps. “In the final run I left the top the same and cleaned it up at the bottom. I felt like we were ripping at the bottom, so I figured we had a podium locked up.”

Germany’s Francesco Friedrich completed his dominant season, and golden sweep of both the two- and four-man races in Whistler. Friedrich and his team of Candy Bauer, Martin GrothKopp and Thorsten Margis won the Martineau Cup, one of the oldest trophies in Olympic sport, with a time of 3:21.33.

With little expectations on the Canadian Bobsleigh Team following a number of top athletes retiring from the program after the 2018 Olympic Winter Games, the Canucks began a new era this fall with the same mission for medals as those before them.

Team Kripps was pieced together with a former varsity football player, a rugby player and 25-year-old newcomer to the sport from track and field athlete.

“This podium is insane for me. I’ve been working to win a World Championship medal for seven years and to do it in the four-man means so much,” said two-time Olympian Ben Coakwell. “We talk about working together as a team every day in our group. There is no all-star on this team – we are just a bunch of guys doing it for each other. We have an ability to raise each other’s level every time we hit the track. If we continue to spend more time together, and keep playing our roles, I think we can continue to win a lot more medals and carry the momentum all the way to Beijing.”

The 31-year-old Coakwell, who now has four World Cup four-man podiums in his career, played a key leadership role along with Stones in introducing Ryan Sommer and a new crop of Canadian bobsledders to the marquee event on the elite circuit. Sommer joined the program this summer.

“I knew these guys lost a lot of key people last year so I came in this year wanting to step up and just try to fill some pretty big shoes as best as I could,” said Sommer. “I learn by from Ben and Cam every day. They helped me get better and be consistent.”

The breakthrough for the Canadian crew came one month ago in Lake Placid when Team Kripps won their first ever World Cup four-man race. It was just the fifth four-man podium in Kripps’ career.

“That gold in Lake Placid was awesome and gave us a ton of confidence heading into these final races. The whole goal this year was to build towards World Championships, and we did that,” added Stones. “We have had so many good runs here. We were really confident knowing that if we could dial things in at the start, we could have success here.”

The Canadians did just that, clocking consistent, top-three push times in each of the four heats. The last three start times being 4.75.

Pierre Lueders and Vic Emery are the only other Canadian pilots to accomplish the rare feat.

A two-time Olympic champion, Lueders won two-man gold and bronze in the four-man the last time Canada hosted the World Championships in 2005 at the Olympic Track in Calgary. Canada’s Lascelles Brown was in both of those sleds.

The 1964 Olympic four-man champion, Vic Emery, was the first Canadian to slide onto the World Championship podium in both races. Emery won four-man gold and two-man bronze at the 1965 World Champs.

“It’s awesome to start to get that consistent success and to be able to double at a major event like this is massive,” said Kripps. “Just having my name mentioned along the likes of Lueders and Emery is such an honour.

“When you get to the point when you are fighting for the podium, you need a lot of small things to make the difference. To get everything in place for two sleds and have success with both is not easy. It is huge.”

Chris Spring piloted his Canadian crew of William Auclair, Dexter Janke and Neville Wright to a 10th-place finish with a four-run time of 3:23.33. A two-time Olympian, Wright marked the end of his memorable career by giving his race helmet to a wide-eyed youngster watching trackside after he got out of the four-man sled for the final time.

Nick Poloniato and his crew of Fabio Silva, Pat Norton and Keefer Joyce did not qualify for the final run with the top-20, finishing 22nd.