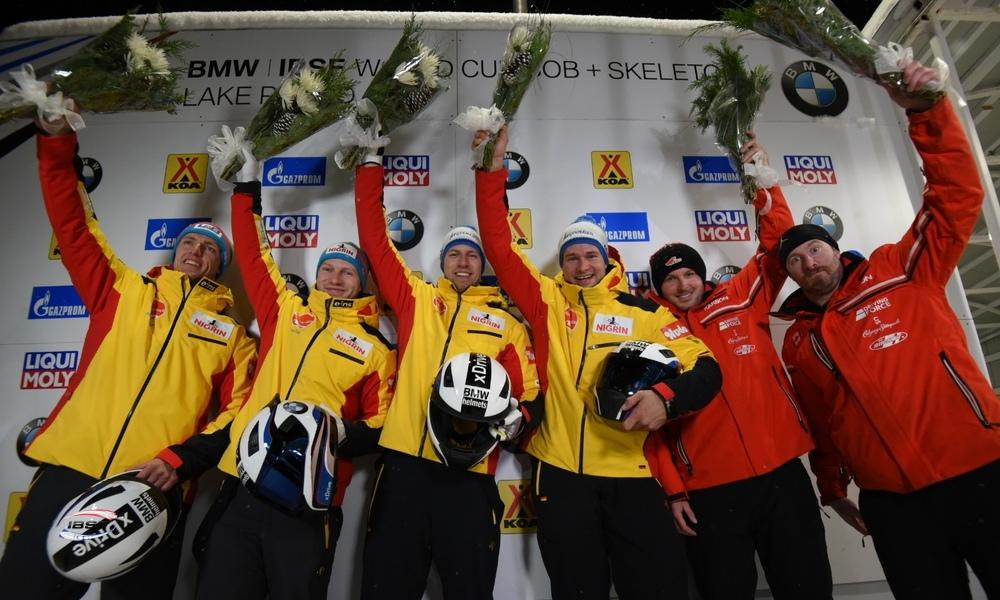 Sitting in fifth place after their first rip down the 1,680-metre track, the Canadian duo put down the second-fastest time in the final heat to secure the bronze with a two-run time of 1:50.43.

“It was a good comeback in that second heat and nice to start the season on the podium,” said the 32-year-old Kripps. “We don’t often put down fastest times. Consistency is the key for us and that was the difference again today.”

It was the 13th career World Cup two-man podium for the Olympic champion from Summerland, B.C. It was his first with Saskatoon’s Ben Coakwell on the brakes. The 32-year-old two-time Olympian, who has been a regular in Kripps’ four-man sled, captured his first two-man medal of his career.

“Ben did a great job today. I know he wants to get a little bit more at the start, but we had top-four pushes and were in the mix today,” added Kripps, who has slid onto the Lake Placid podium in each of the last four years – backing up two silver-medal performances with back-to-back bronze medals.

“It was tricky up there at the top of the track with cold and sticky conditions. We definitely want to close the gap at the start, but we had good velocity today.”

Germany’s Johnanes Lochner and Florian Bauer finished on top of the pack at 1:50.17. Germany’s

Francesco Friedrich and Thorsten Margis, who tied Kripps for top spot on the Olympic podium in 2018, were second at 1:50.25.

Lake Placid will host another two-man race on Sunday. Kripps will reunite with Cam Stones, of Whitby, Ont., on the brakes.

Canada’s Mirela Rahneva kicked off her 2019-2020 World Cup campaign with a fourth-place finish in the women’s skeleton race.

Looking to feed off a third-place overall World Cup finish from one year ago, the 31-year-old punched the clock at 1:50.54 after her two trips down the icy chute which winds through the Adirondack Mountains.

“Today was a great start to the season. It’s always fun to race on the track I started on and so close to home,” said the Ottawa native. “I’m happy with the result but will be chasing down a podium spot next week.”

The first race since the implementation of new weight and equipment rules shook the field up in Lake Placid. Rahneva was in third spot after the first rip down the sliding-sport venue for the 1980 Olympics but dropped off the podium after posting the fifth-fastest time in the final heat.

“It was a strong team finish today. We’ve been working really well all week and it’s a pleasure working with our new coaching staff,” added Rahneva.

Canada’s women’s sled of Christine de Bruin and Dawn Richardson Wilson were also hunting down the podium but after their second trip down Mount Van Hoevenberg f they were forced to settle for fifth place with a time of 1:53.94.

A silver medallist in Lake Placid one year ago, the 30-year-old De Bruin of Stony Plain, Alta., and rookie 21-year-old brakeman, Dawn Richardson Wilson, were looking to find some similar magic in the Canadian sled at the season-opener but struggled to keep their top speed in the second run and finished fifth.

With her World Championship medal-winning brakeman, Kristen Bujnowski, sidelined with a leg injury, Edmonton’s Richardson Wilson won a push off for the right to push De Bruin in Lake Placid.

“It was an experience like never before,” said the talented Richardson Wilson of her first World Cup race. “It really opened my eyes to all of the emotions these athletes go through. Overall, I’m really impressed and learned a lot by how well they handle things and execute.

“Christine taught me the ropes this week and helped me keep my nerves in control. I am extremely grateful for all the support and love from my all of my teammates.”

Kaillie Humphries and Lauren Gibbs, of the United States, were first at 1:53.48. The Germans grabbed the final two spots on the podium. Stephanie Schneider and Lisette Thoene slid to the silver at 1:53.79. Kim Kalicki and Vanessa Mark were third (1:53.92).