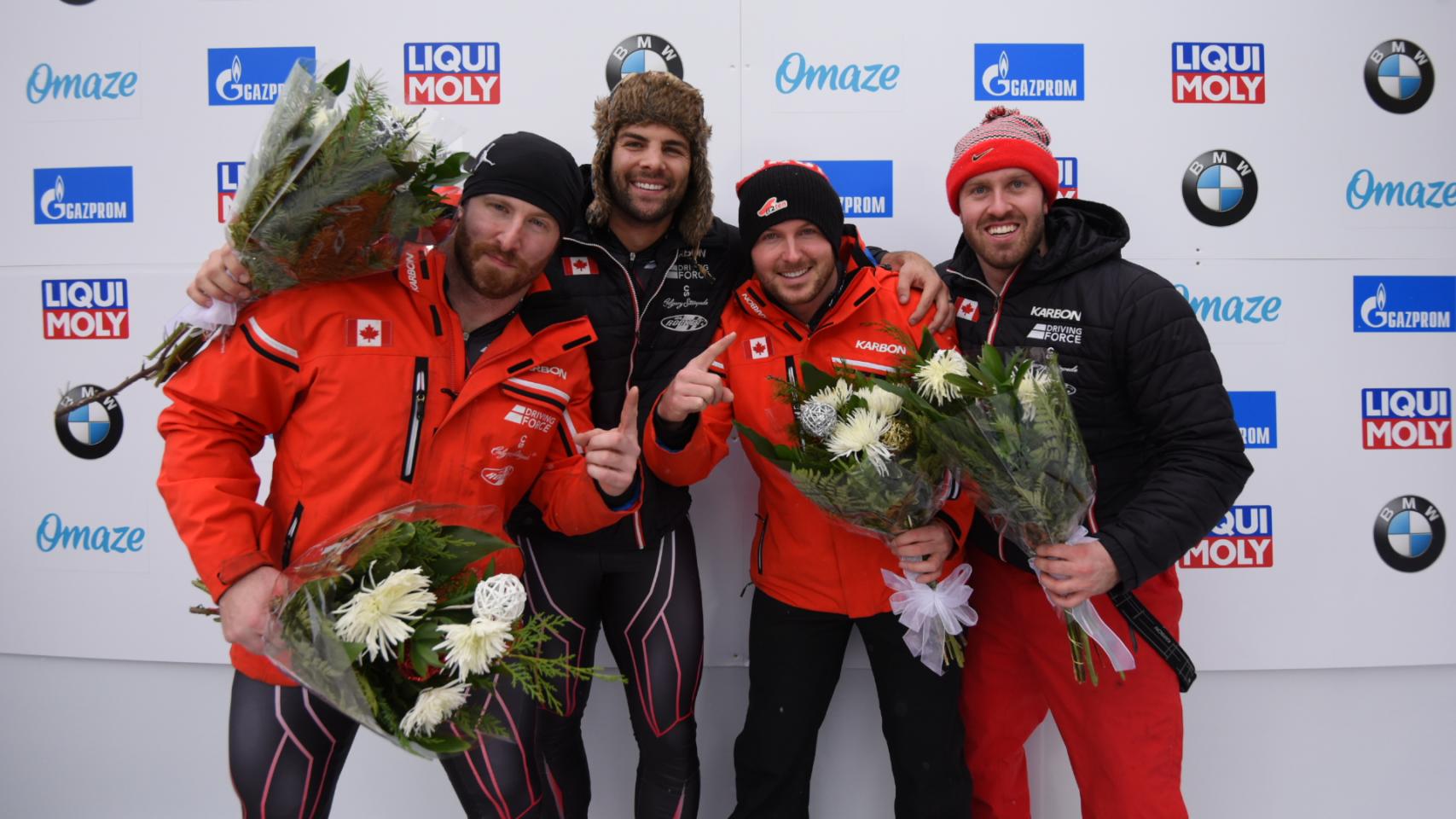 The 32-year-old Kripps and his crew of Cam Stones (Whitby, Ont.), Ben Coakwell (Saskatoon), and Ryan Sommer (White Rock, B.C.) handily won their second-straight four-man race in as many days on one of the most challenging tracks in the world with a combined time of 1:49.45.

“We are just cruising in the four-man and are having so much fun,” said Kripps, of Summerland, B.C. “I think there are two reasons for our success. Bobsleigh Canada Skeleton stepped up and invested in a new sled for us this year which is similar to what all of the top teams in the sport have, and the boys are all working so hard on and off the track. We are just having a blast down here.”

Sunday’s triumph is Kripps’ seventh career four-man medal as a pilot on the World Cup. His fifth on the punishing 1,680-metre beast of a track that winds down Mount Van Hoevenberg situated in New York’s Adirondacks. All three of his four-man victories have come at the 1980 Olympic venue.

The Canadian crew had the fastest runs in all four heats over the weekend in Lake Placid.

“Knowing that we have the equipment and the team has been together for two years, I am sliding with a new level of confidence,” added Kripps. “I know I don’t have to make something happen. If I just stick to my lines, I know the sled will carry the speed and we will be fast.”

Two German teams were left wondering how to close the gap on the burly Canucks. Johannes Lochner, Christopher Weber, Florian Bauer, and Christian Rasp were .30 seconds back in second spot at 1:49.75. Francesco Friedrich, Martin Grothkpp, Thorsten Margis and Candy Bauer held onto third place with a time of 1:49.78.

Two-time Olympian, Ben Coakwell, said the first start on Saturday at the top of the 20-corner track where the squad pushed a 5.02 gave the team a little extra fire.

“I think we surprised ourselves a bit with that first push,” said the 32-year-old Coakwell, who added the team nearly matched that time on Sunday’s final run where they chalked up a 5.03 start, leading to their fastest downtime at 54.63.

“We know Kripps’ driving is off the charts right now so we if we give him a solid start, we will be competitive.”

Coakwell, a veteran of the Canadian Bobsleigh Team, has been one of many athletes within the team leading a cultural change within the program, which he believes is translating into podium performances.

“Everyone on our team knows their role. We know when to step in and when we should step out. We also hold each other accountable when we are out of line. I can’t underestimate the power this has on not only our four-man team, but in the success of our entire program,” added Coakwell, who was part of Justin Kripps’ crew who was named Team of the Year in 2019 at the Canadian Sport Awards.

“From purely a cultural, winning formula basis, absolutely I believe this is one of the best four-man teams Canada has ever put together.”

Coakwell and the Canadian men also credited Christine de Bruin and Kristen Bujnowski’s battle to get back on the podium by laying down the fastest final run and winning the bronze on Saturday for lighting a fire in the boys today.

“We are a small team, but we are all in this together. The whole team was so stoked for Christine and Kristen yesterday to get that bronze medal,” said Coakwell. “Success stimulates success. We are all cheering for each other. The girls were out at the track today cheering us on and it so positive. We are in this for each other to achieve the greater good for the entire program and for Canada.”

The World Cup will now take a break for the holiday season.