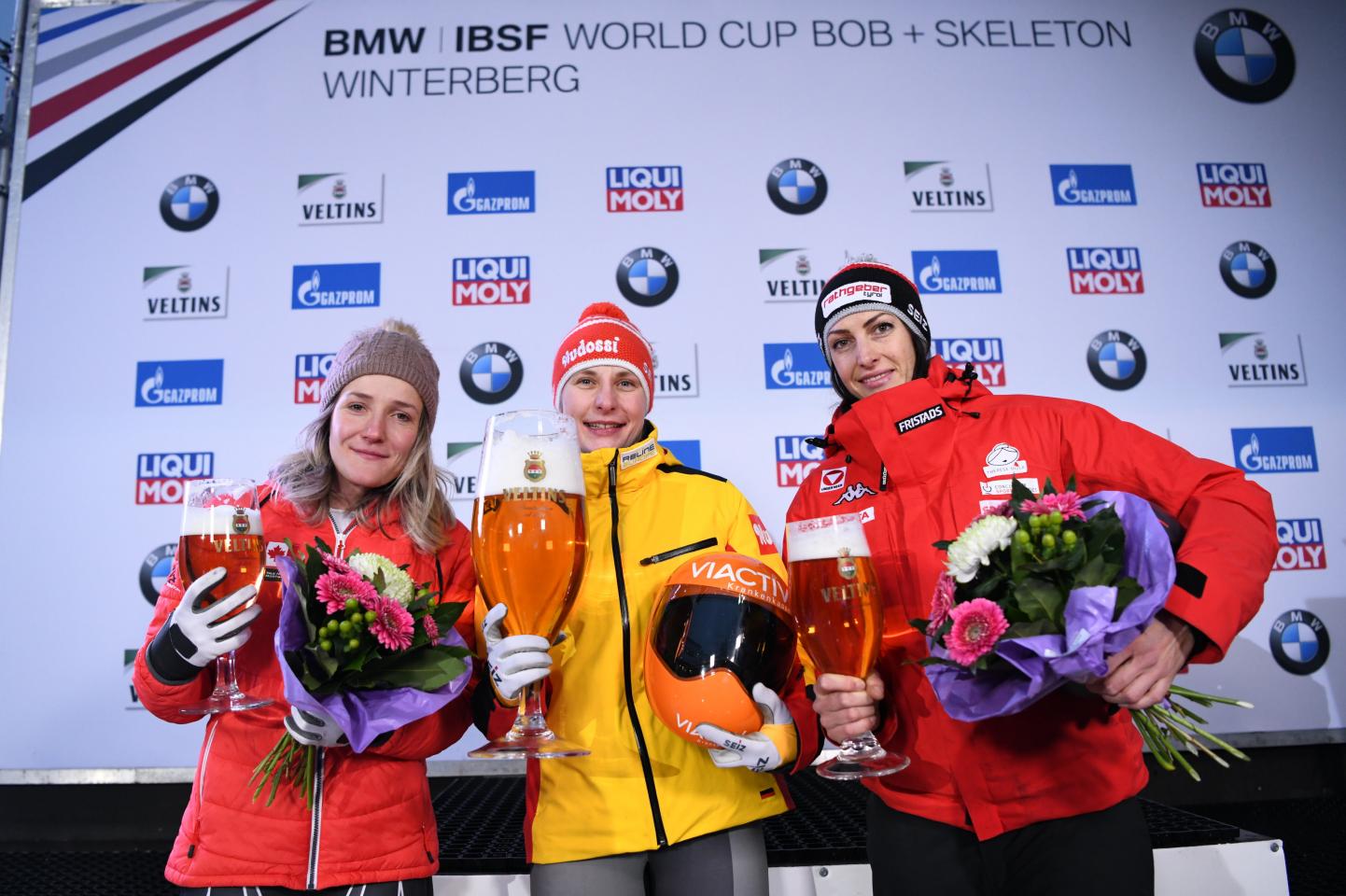 WINTERBERG, Ger.—Canada’s Mirela Rahneva enjoyed a sizzling start to 2020 while sliding to a silver medal at the skeleton World Cup in Winterberg, Germany on Sunday.

The 31-year-old chalked up the fastest run of the day (58.01) while sliding down the Winterberg track in the final heat to secure the ninth World Cup medal of her career and first this season. The 2018 Olympian finished with a combined time of 1:56.24.

“This feels really good,” said Rahneva, who has finished third in the Overall World Cup standings in each of the last two seasons.

“I was sitting in fourth after that first run and was determined I would not be edged off that podium again.”

Rahneva, who hails from the Nation’s Capital, was also fourth in her first two races of the season before the holiday break in Lake Placid. She made sure she was not on the outside looking in after her final blast down the 1,330-metre track.

“I was sitting there after the first run and I said to myself ‘I’m sick of fourth. I’ll be really, really mad if that happens again,’” added Rahneva. “I was definitely more eager to step it up in the final heat and get on the podium.”

Needing to clean up some mistakes she made in her first heat on corners five and nine, Rahneva nailed all 15 corners to win her second career medal in Winterberg. She finished third on what is one of the oldest tracks in the world during her rookie season in 2017.

“I really like this track. It is a nice mixture of technicality and a glider’s track, so it plays into my strengths,” said Rahneva. “This definitely feels good now. I don’t know if it is going to carry into anything. I’m going to play it conservative and not feel overconfident because anything can happen in racing.”

Rahneva’s Olympic teammate, Jane Channell, also enjoyed a breakthrough day in Winterberg as the North Vancouver resident continues to hunt down her first podium of the season. Posting the fourth-fastest start times in each heat, Channell clocked-in at 1:57.24 for sixth place.

“Starting the New Year with a sixth-place finish is definitely a big confidence booster,” said Channell. “The set up for the race was different than any other. We came together as a team, working well for each other when we needed immediate help on the track.

“The field is filled with top competitors so to be ranked up there at the top of the results sheet is huge for me.”

Calgary’s Madison Charney rounded out the Canadian contingent in the women’s race with an 18th-place finish at 1:58.32.

In the men’s race, neither Canadian qualified for the second run with the top-20 athletes. Kevin Boyer, of Sherwood Park, Alta., was 21st, while Calgary’s Kyle Murray was tied for 22nd.