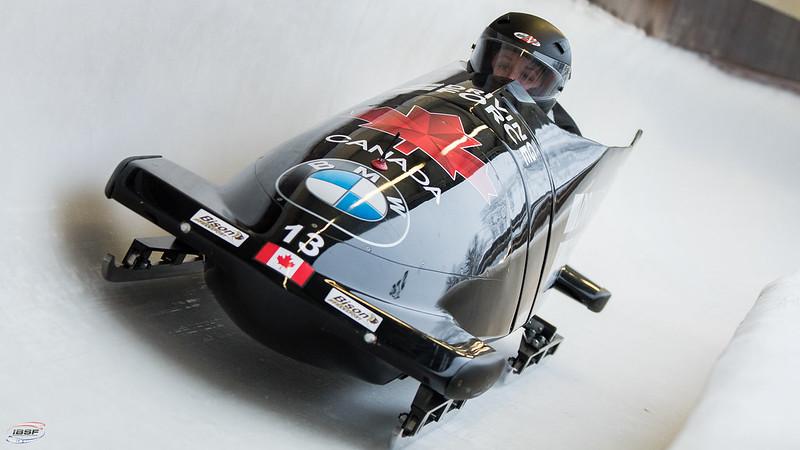 The Canadian bobsleigh women battled from behind on the final two runs to win bronze at the BMW IBSF World Championships for the second-straight year in Altenberg, Germany.

“This one feels so good. We didn’t expect it at all,” said de Bruin, of Stony Plain, Alta. “After yesterday’s runs, we just said let’s keep doing the things we have been doing and plugging away. I am so happy.”

Disappointed after the opening two heats on Friday where they sat in fifth spot, the determined Canucks dug deep in Saturday’s final two runs to climb onto the final spot on the podium with a four-run combined time of 3:46.55.

With an American sled and three German sleds ahead of de Bruin and Bujnowski (Mount Brydges, Ont.) on the challenging 17-corner track at the midway point of the race, the Canadian duo made their move while throwing down the third-fastest run in the third heat to climb one more spot in the standings, just .02 seconds off the podium with one run remaining.

“Honestly, our thought process was the same as it always is,” said the 27-year-old Bujnowski. “We knew it was so close and it is impossible not to think about what the result could be, but it was important not to get ahead of ourselves and I just wanted to think about the technical things that I had to do.”

Staying patient and focused on consistency, a solid push and a clean final run by the 30-year-old de Bruin catapulted the Canadians over one more German sled to secure their second-straight bronze medal at the premier race in a non-Olympic year.

“I made some mistakes in the first run today but in the second run I thought this is my last run of the season, go out and enjoy it and have a good one,” said de Bruin.

“It is pretty surreal right now,” added Bujnowski after crossing the finish line. “It could have gone either way. There is lots of tough competition but to come out of this with a medal is amazing.”

The American sled of Kaillie Humphries and Lauren Gibbs were first at 3:45.49. Germany’s Kim Kalicki and Kira Lipperheide hung on to the silver medal at 3:45.86.

One of the toughest tracks in the world, Altenberg has been a home-away-from-home for de Bruin and Bujnowski. Their first ever World Cup medal came on the tricky 1,413-metre chute last year when they won the silver.

“Altenberg is my second favourite track to Lake Placid. They are similar because they are driver’s tracks, and I am a driver through and through,” added de Bruin. “I really like the flow of the track here. It is technical and difficult.”

De Bruin and Bujnowski have been on quite a run since climbing onto the podium for the first time in Altenberg last year. After adding one more World Cup silver to their resume in Lake Placid, they won their first career World Championship bronze medal on home ice in Whistler last March.

The Canadian duo carried the momentum into the 2020 season, finishing in the top-five in seven of the eight World Cup races, adding a silver and bronze medal to their resumes. They also had two fourth-place finishes. Consistently in the medal mix, the lone Canadian sled secured third place in the Overall World Cup standings – an achievement de Bruin claimed is proof they belong in discussions with the world’s best.

“Finishing third overall means to me that we have arrived, and I believe that even moreso now” said de Bruin. “This shows we are consistent and the work we have put in is paying off.”

The final two heats of the men’s two-man bobsleigh race are set for Sunday. Justin Kripps and Cam Stones currently sit in ninth place at the midway point of the race.