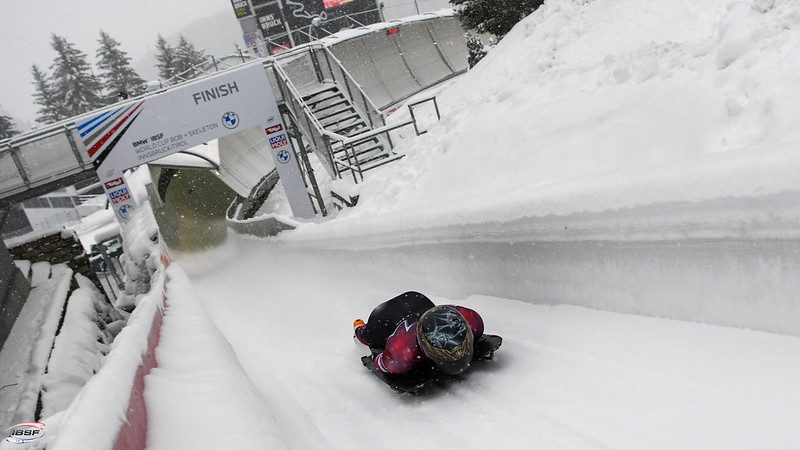 IGLS, Aut.—New mama, Elisabeth Maier, slid to seventh place in her return to the World Cup skeleton circuit on Friday, but it was actually Mother Nature who stole the show in Igls, Austria.

Competing in her first race since taking a one-year maternity leave, the 26-year-old clocked the sixth-place time in her first run down the Austrian track. However, with heavy snow creating an inconsistent playing field for the 20 athletes on the start line, the jury wiped out the first run results and made it a one-heat race counting only the second-heat times.

“What a race designed for 2020,” said Maier, whose start in the first heat was only a few-hundredths off her all-time personal best mark. “I am so thankful to be racing again though because this time last year I didn’t know if I would ever race again. To be on the start line was very exciting to be back and doing it for mamas.”

After shaking off any pre-race jitters, Calgary’s Maier – who is married to Austrian bobsleigh athlete Ben Maier – posted a second-run time of 54.52 for seventh spot.

“The game plan was to follow my processes that I’ve worked so hard on with my sports psych and I achieved that even with the craziness (today) so I’m proud of that,” added Maier, a 2018 Olympian who has racked up 10 World Cup medals in her career.  “These girls are good – the best in the world. I’m honoured to be back competing with them but I am hungry for so much more.”

Russia’s Elena Nikitina slid to the top of the podium with a time of 53.74. Kimberley Bos, of The Netherlands, was second at 54.02. Germany’s Tina Hermann rounded out the podium in third place at 54.19.

Maier was the only Canadian bobsleigh or skeleton athlete sliding internationally prior to the holiday break. She targeted the back-to-back races in Austria given she lives in the region with her young family. Maier will be back on the start line in Austria next week.