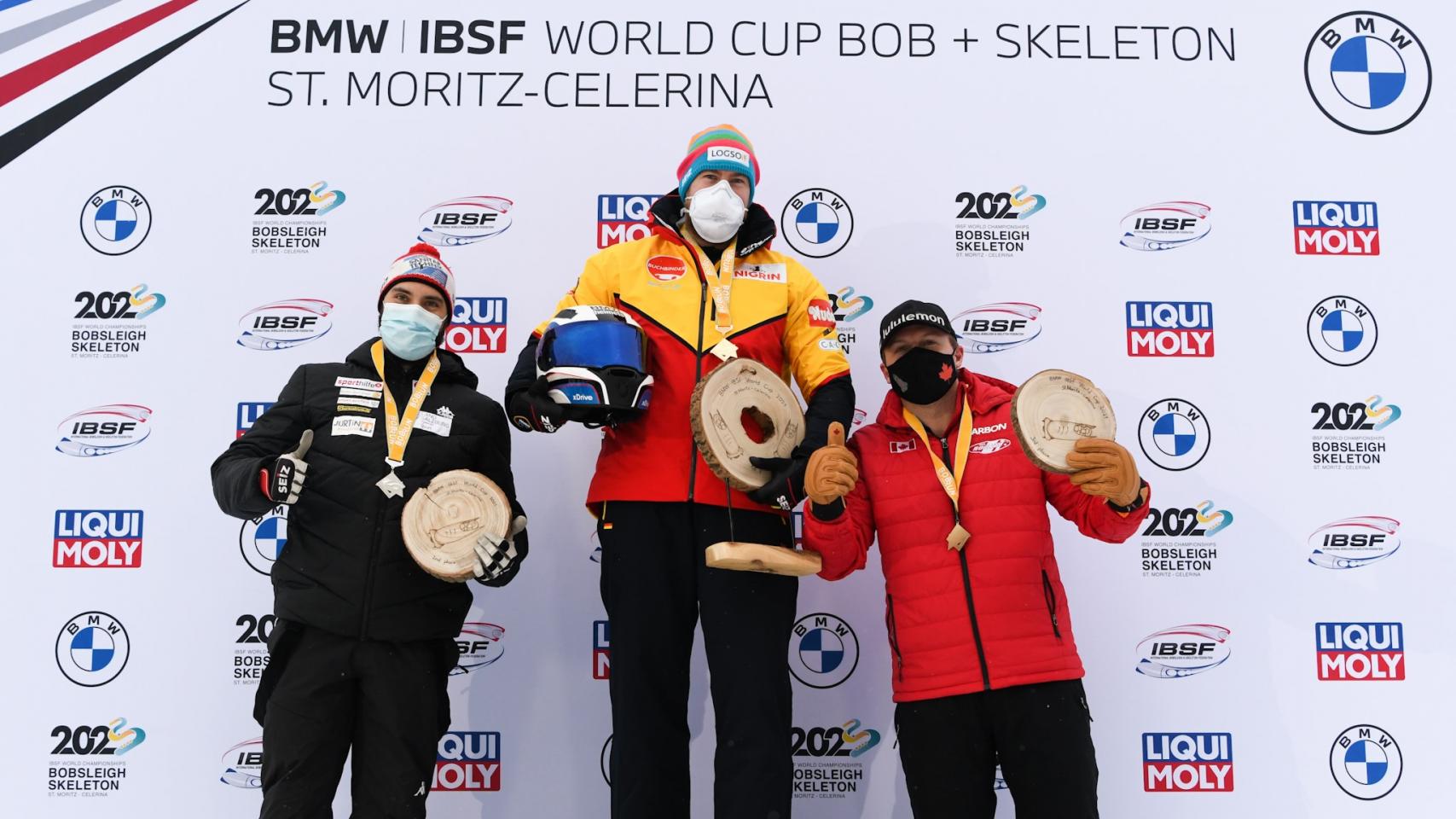 ST. MORITZ, Sui.—Justin Kripps and his Canadian bobsleigh crew slid to the World Cup podium in both the two- and four-man events on the same weekend for just the fourth time of their career, and first ever at the birthplace of the sport in St. Moritz, Switzlerland.

The 34-year-old Kripps of Summerland, B.C., who teamed up with Cam Stones, of Whitby, Ont., to win his first-ever two-man medal on the only non-refrigerated track in the world on Saturday, matched that bronze-medal performance Sunday where he drove to his 10th career four-man medal as a pilot.

Kripps and Stones completed the rare double-medal weekend while teaming up with Ryan Sommer (White Rock, B.C.) and Ben Coakwell (Saskatoon). Two decent pushes combined with two solid drives down the 1,700-metre naturally iced piece of sliding sport art added up to a third-place time of 2:10.05.

“It was awesome for us to get a double podium here in St. Mortiz. We sure missed the crowds and the champagne this year but we’re loving building this momentum together,” said Kripps, whose team also won the silver at the season’s first four-man race last weekend in Winterberg.

“Everything is crisp with the team on and off the ice, and that is a big part of our success. The devil is in the details. We’ve talked as a team about being the best in the world at each of our individual jobs, and I believe that is what is happening.”

Team Kripps also won medals in both race disciplines on the same weekend at the 2019 World Championships in Whistler as well as World Cup stops in Lake Placid, New York and Konigssee, Germany over the last two seasons.

“It is always an honour to hear those kinds of stats and accomplishments. It means a lot to all of us to be in the same conversation as some of the legendary Canadian athletes who came before us,” added Kripps. “There have not been too many times that we have been on the podium in both the two- and four-man races on the same weekend so I am really pumped for the crew.”

Bringing a combined 165 World Cup starts with them to the start line at St. Moritz, it was the seventh four-man podium in addition to their bronze at the 2019 World Championships for the laser-focused Canadian crew since hopping into the same sled together following the 2018 PyeongChang Olympic Winter Games.

“I think the experience has allowed us to elevate each other immensely,” said two-time Olympian, Ben Coakwell who was making his 62nd World Cup start on Sunday.  “The experience leads to honesty and trust which leads to growth. A team is more than its individual athleticism. For me, 62 races are just 62 experiences to help me make race 63 that much better for our team.”

That team-focused mindset is resonating throughout the sled and the Canadian Bobsleigh Program.

“We lean on each other with so much experience on the team. Guys like Ben and Kripps have raced so much and been in so many tight races that having their experience in the sled brings a wealth of confidence each race,” added Stones. “In moments like today’s race, we’ve been in that exact position before heading into heat two. We know we can execute on our plan and land on the podium.”

Germany’s Friedrich Francesco made a little history of his own winning the gold medal on back-to-back days in St. Moritz. His crew of Martin Grothkopp, Alexander Schueller and Thorsten Margis posted two start, and two records en route to chalking up a winning time of 2:09.56.

Calgary’s Chris Spring returned to the four-man start line for the first time in more than one year with a rookie crew that included Ottawa’s Mike Evelyn, Mark Mlakar (Mississauga, Ont.), and CFLer Shaquille Murray-Lawrence (Scarborough, Ont.). The trio of Canucks pushed Spring to 11th in their World Cup debut, posting a time of 2:11.36.

Earlier in the day, Christine De Bruin (Stony Plain, Alta.) and Sara Villani (Norval, Ont.) led the Canadians in the women’s race. De Bruin piloted her sled to eighth place with a time of 2:17.44. Two Edmonton-based athletes, Alysia Rissling and Dawn Richardson Wilson also finished in 11th spot at 2:17.76. It was Rissling’s first World Cup race in more than a year after taking last season off due to injury.