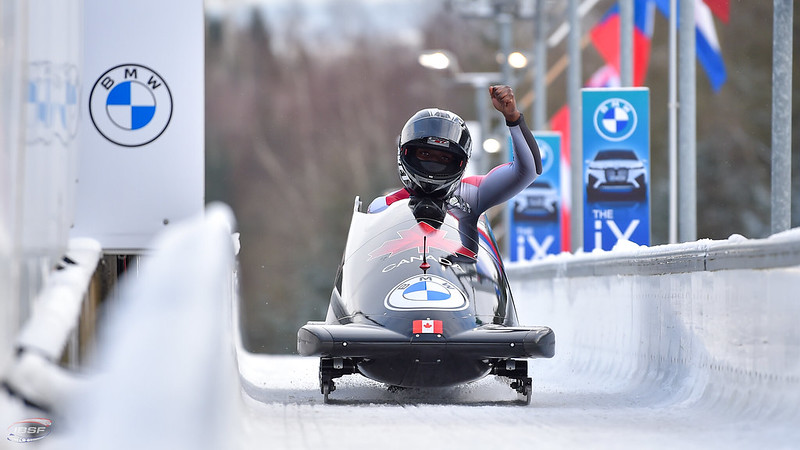 ALTENBERG, Ger.—Canada’s Cynthia Appiah broke the ice to capture her first career World Cup medal as a pilot, winning the silver in the monobob race on Saturday in Altenberg, Germany.

Posting the top start times in both heats, the Torontonian rocketed to a second-place time of 2:00.63 on the intimidating 17 corner track.

“This feels so great. To win my first World Cup medal as a pilot, and to do it on a very daunting track that is s definitely one of the most difficult out there just makes it extra special,” said Appiah. “To win a medal on any track means a lot, but to do it in Altenberg where there is a lot of fear behind it for everyone and not as jovial in the start house, is huge. Winning a medal on a hard track against way more experienced pilots means so much.”

It was a matter of time for the 31-year-old to breakthrough onto the podium. She was third earlier this year at the Olympic Test Event in Beijing and finished in the top-five in the opening two World Cup monobob races in Igls, Austria.

“I could just feel this building in the last couple of weeks. I really wanted to get a medal in Igls, and to be just off the podium in both races, I told myself ‘it has got to happen in Altenberg,’’ said Appiah. “To finally exorcise those demons and get on the podium, I can now breathe a sigh of relief and just go forward.”

With each of the three Canucks in the top-five after the first run on the 1,413-metre beast, the top pilots in the sport will be keeping a sharp eye on Appiah and her teammates on the trail to Beijing.

Shattering the field at the start and mastering her driving lines down the track, Appiah slid into new territory on Saturday carrying a .09 second lead into the final run and the last sled to leave the start block in the final heat.

“Being the last one in the start house (in the final run) is a big deal, but I try not to let the weight of the situation play into my mind. It is something I need to get used to and learn how to deal with that silence before hearing the roar of the crowd, but today it was more about knowing that ‘I’m on Altenberg’ and never losing focus on that,” said Appiah, who added so many of her competitors were cheering for her between runs.

“To come down in second by only .06 I was a bit disappointed, but I was also really happy to see how much of a lead I built over (Germany’s) Laura Nolte in third place. I was like ‘shoot, I have finally shown that I belong here with the best,’ and that just pumps me up.”

Appiah was edged off the top spot on the podium by American Kaillie Humphries who clocked a time of 2:00.57. Nolte slid to the bronze with a time of 2:01.17.

Appiah – a former brakeman who has pushed multiple Canadian pilots to the international podium – is one of the most gifted athletes on the international circuit. Proud of her Ghanaian roots, Appiah has been steadily mastering her craft and positively progressing since jumping into the pilot’s seat four years ago.

She competed in her first World Cup as a pilot last February in Igls, Austria one week before representing Canada at the World Championships in Altenberg.

Appiah has been following the path to the podium in the last Olympic quadrennial set by her Canadian teammate, Christine de Bruin – a 32-year-old from Stony Plain, Alta. who has two World Championship medals in this Olympic quadrennial and was coming off a third-place finish in last weekend’s monobob race.

De Bruin was hunting down the podium once again while sitting in third place after her opening run, but dropped one spot into fourth spot with a time of 2:01.17.

Melissa Lotholz, of Barrhead, Alta. was in fifth place at the midway point of Saturday’s race and making a podium charge of her own before crashing in corner nine and popping back up in the final heat, dropping her to 18th place at 2:06.53.

They didn’t land on the podium, but it was a medal-worthy performance for Chris Spring (Vancouver) and Mike Evelyn (Ottawa) who slid to fourth place in Altenberg, Germany and their bets finish together.

The Canadian duo clocked a time of 1:50.37 on a track that has troubled the three-time Olympian throughout his career.

“I’m really proud of the team this week. It’s always tough for me coming here and we’ll take a lot of confidence out of today’s results. It takes five people to have a great two-man result, and all of them on Team Spring can take pride in this result,” said Spring, who acquired his pilot’s license to fly airplanes while taking the 2019 season off.

It was nearly 10 years ago Spring experienced a horrific crash during a training run on the challenging Altenberg track that sent he and his crew to hospital on January 5, 2012. While the multiple World Cup medallist has competed on the track many times since, last year many of the top German pilots helped him conquer the past by providing advice on how to commandeer the 17-corner chute. The learnings propelled the Aussie-born Spring to rattle off three medals at a Europe Cup stop last season.

“There’s a lot of emotions that surround this track and my history here. For a long time, I battled with dealing with that crash and getting over it. I think I’ve gotten to a place now where I like to welcome in the fear that creeps in every now and again to remind myself that what we’re doing here is dangerous, but also very special,” said Spring at that time.

On Saturday, he nearly achieved the ultimate of landing on the World Cup podium. He battled his way into fourth place after putting down the second-fastest final run.

“We would’ve loved to be on the podium today, but we have another shot tomorrow and the guys are really excited to race,” said Spring. “I’m not going to get ahead of myself here as the four-man will be extremely challenging with the conditions. It is looking like the ice will be blistering fast, and I have to make sure to stay focused.”

Germany’s Francesco Friedrich and Alexander Schueller continued to dominate the two-man field, winning with a time of 1:49.96. Johannes Lochner and Christopher Weber were second at 1:50.20. Russia’s Rostislav Gaitiukevich and Mikhail Mordasov finished .14 ahead of Team Spring for the bronze at 1:50.23.

The World Cup continues on Sunday in Germany with the two-woman and four-man bobsleigh races. Both events will be streamed live on cbcsports.ca.

“The ladies did a great job today too. Team Canada is really starting to march on here, and it is great to see,” said Spring.