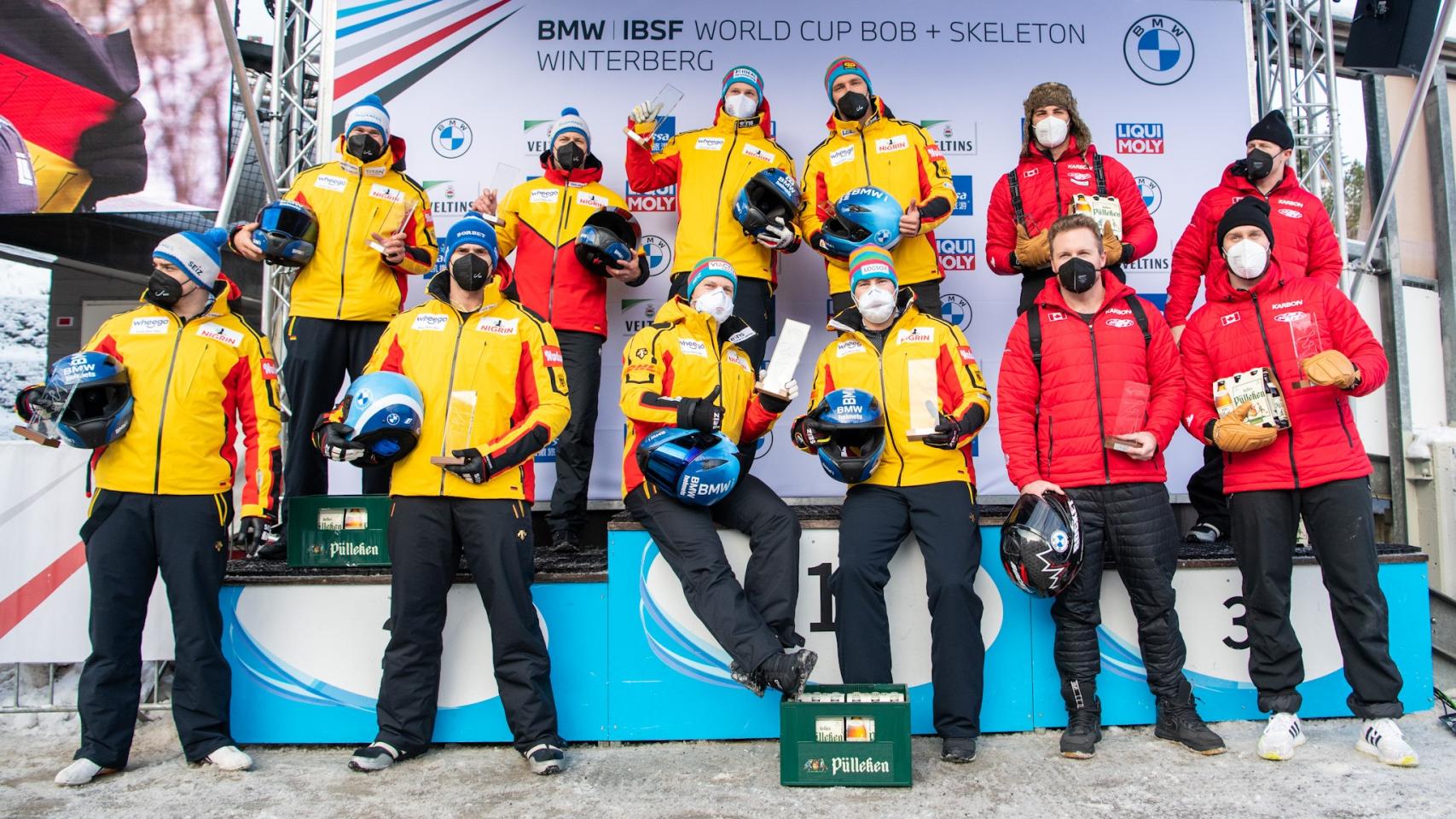 Cynthia Appiah battles to third in monobob, Team Kripps back on podium in four-man

Cynthia Appiah slid to her second-straight World Cup podium in monobob racing, while Justin Kripps piloted his crew to their second four-man podium of the season.

Posting the second- and third-fastest start times, the 31-year-old Appiah battled to the bronze on the challenging 15-corner track, clocking a two-run time of 1:58.24.

“It feels great to get on the podium, especially given I crashed two out of three runs in training this week. I kept everything the same today – put my trust in the coaches and mechanics – and knew all I had to focus on was putting down two solid runs and everything would be okay,” said Appiah.

The rising bobsleigh star shared the podium with American Elana Meyers Taylor, who finished in first place with a time of 1:57.83 and Australia’s Breeana Walker who clocked a second-place time of 1:58.06.

Appiah, who hails from Toronto, is riding high following a career breakthrough last week where she slid to the World Cup monobob podium for the first time ever, winning the silver in Altenberg, Germany.

“Last week was the confidence boost I needed. I left Igls thinking that was a track I should have got on the podium and didn’t. I realized I just needed to learn to settle down, respect the sport and it would come,” said Appiah. “This is the Olympic year. Everyone is stepping up their game and I’m trying to match strides with them so I’m very happy to get another podium.”

The former high-level brakewoman has been making steady progress since jumping into the pilot’s seat four years ago and is now taking down many of the top names in the sport each week.

She’s not alone. Her Canadian teammates are also hunting down the podium regardless of the track they face.

Huge pushes by the Canadian boys propelled Team Justin Kripps to their second bronze-medal of the season in four-man action.

Bouncing back after a couple of crashes in training on the 1,330-metre track, Justin Kripps (Summerland, B.C.) and his crew of Ryan Sommer (White Rock, B.C.), and Olympic teammates Cam Stones (Whitby, Ont.) and Ben Coakwell (Saskatoon) slid to the final step of the podium with a time of 1:48.09.

“We are really happy with the result today after a tough week of training. I was struggling with how the track was shaped all week and crashed my first run down (in training) and had a few close calls so I’m really proud the boys stayed positive and encouraged me,” said Kripps following his 13th career four-man podium.

His crew came out on fire, knocking off the second-fastest start time in the opening run. They followed that up with the fifth top time in the final heat.

“The boys blasted off some big starts to get us on the podium today,” said the 34-year-old Kripps. “This track isn’t high up on my list of favourites. I’ve had lots of problems here and I find it can change a bit depending on how much ice has built up, but I always relish a challenge. It was great to stay mentally strong and come away with a good result today.”

The Canadian crew have now racked up 10, four-man podiums in addition to their bronze at the 2019 World Championships since hopping into the same sled together following the 2018 PyeongChang Olympic Winter Games.

Germany’s Francesco Friedrich, Thorsten Margis, Alexander Schueller and Martin Grothkop continued their dominance of the men’s bobsleigh circuit, winning with a time of 1:47.95.

Chris Spring (Vancouver) piloted the other Canadian sled. The three-time Olympian and his crew of Sam Giguere (Sherbrooke, Que.), and Ottawa boys – Mike Evelyn and Cody Sorensen – placed 13th at 1:48.81.