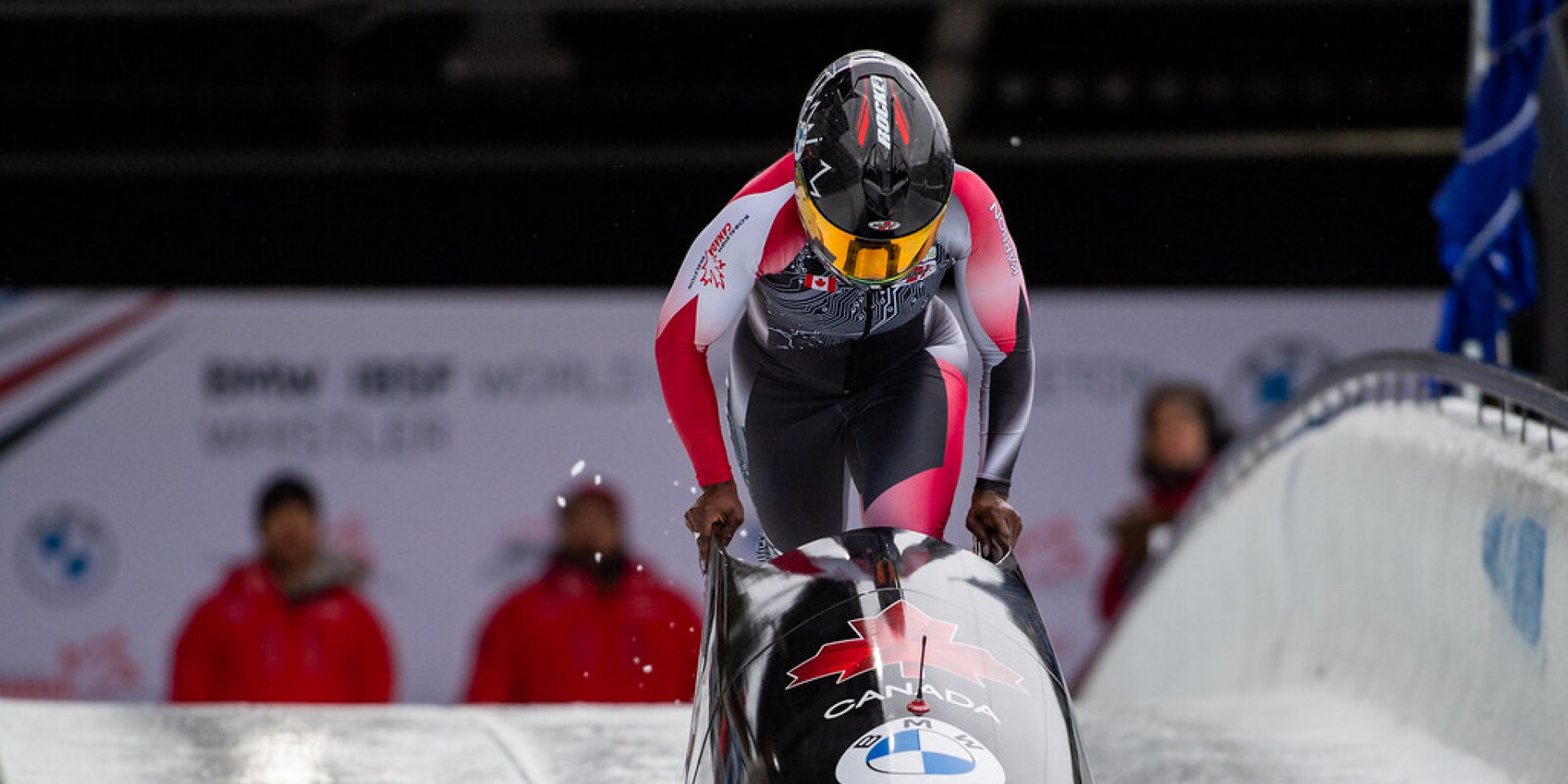 “Today went a lot better than I would have thought. Coming out of that training week, I was really down in the dumps. I wasn’t where I wanted to be. I didn’t have as much confidence going into this race as I would have liked,” said the 32-year-old Appiah.

The second-year pilot on the World Cup credited a good pre-race track walk with technical driving coach, Lyndon Rush, for turning things around when it counted most.

The Torontonian slid to her second-straight World Cup podium in as many races, clocking a third-place time of 1:43.26.

“My track walk with Lyndon really set the tone for me to get everything back on track and resulted in a bronze medal,” added Appiah, who won the silver medal one week ago on home ice in Whistler. “He didn’t say anything out of the ordinary, but we just started going over the track and he helped me really understand what I needed to do and focus.

“He did tell me to treat it like it is training. Sometimes I overthink it and put more into a race than it needs. It is essentially another day with a speed suit on. That helped bring my emotions down.”

Sitting in fifth spot after the first trip down the 15-corner icy chute, Appiah showed her grit while sliding to her sixth career World Cup monobob podium that moved her into second place overall in the World Cup monobob standings.

“The first run was one of the better ones I put down throughout the week, but my start is my bread and butter, and I wasn’t happy to see I was out-pushed, so I just wanted to settle down for the second run,” said Appiah.

Competing in her first World Cup race as a pilot on the tricky Park City track that puts a demand on driving precision, Appiah refocused knowing anything was possible while heading back to the top of the hill just .15 seconds out of the lead.

“Looking at the times, I told myself ‘we still got this,” said Appiah, who competed in Park City in 2017 as a brake woman. “It is so easy to fall back (in this sport), but it is just as easy to climb up in the rankings. Looking at my trajectory last season, I always seem to have something in the tank for that second run.”

Appiah put all the pieces together in the final heat. An improved start time combined with clean driving led to the second-fastest down time, securing her the final spot on the podium.

Canada’s Rookie pilot, Bianca Ribi of Calgary, struggled to find the fast line on Friday. The 26-year-old, who was victorious in her World Cup debut last week at the Whistler Sliding Centre, placed seventh at 1:44.01.

Later in the afternoon, Taylor Austin teamed up with Shaquille Murray-Lawrence (Scarborough, Ont.) in the lone Canadian sled for the two-man race.

The 32-year-old Austin and Murray-Lawrence squeaked into the top-10 with a ninth-place finish and a time of 1:37.13.

Germany’s Francesco Friedrich and Thorsten Margis stormed back in the final run to take the two-man gold with a time of 1:35.82. Brad Hall and Taylor Lawrence, of Great Britain, took silver at 1:36.08. Switzerland’s Michael Vogt and Sandro Michel were third with a time of 1:36.14.

The two-woman and four-man bobsleigh races will take place on Saturday in Park City.

“I have renewed confidence. I know what I need to do on race day, and I think we will put on a good show,” said Appiah, who will team up with Leah Walkeden. “We are first off the top of the hill so the ice will be perfect. If I lay down the same runs tomorrow as I did today, I think we will do very well.”