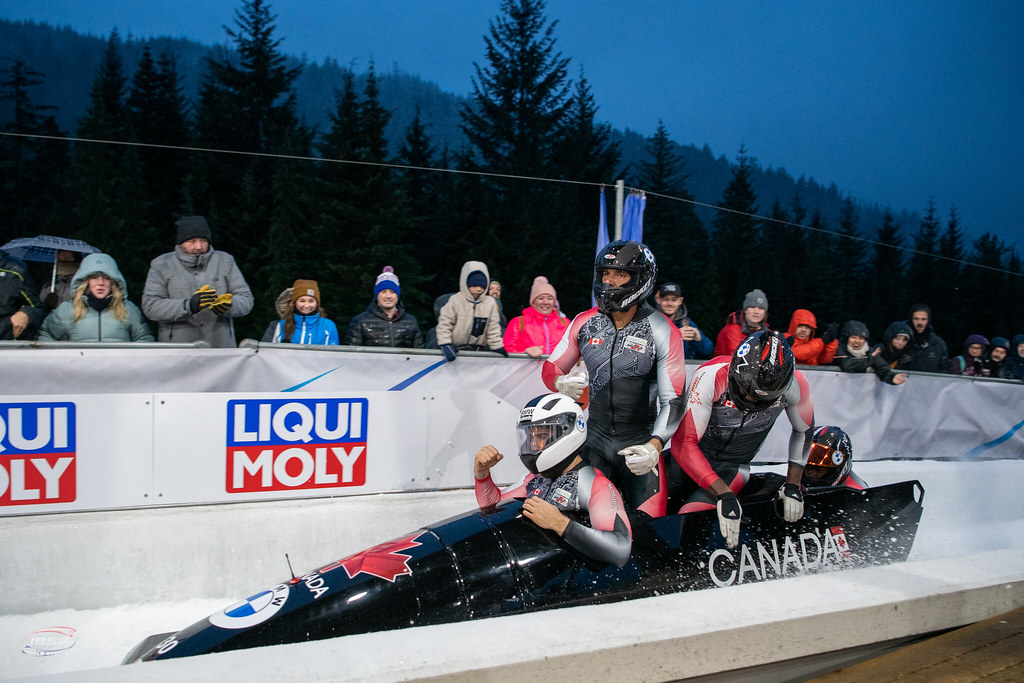 WINTERBERG, Ger.—Two of Canada’s three bobsleighs slid to ninth-place finishes as the World Cup resumed in Winterberg, Germany this weekend.

Toronto’s Cynthia Appiah and Leah Walkeden (Ardrossan, Alta.) reunited for a ninth-place finish in the two-woman event, while Taylor Austin matched the result with his Canadian crew in the four-man race.

The 32-year-old Appiah and Walkeden, 29, clocked the sixth fastest start times in both heats en route to their third top-10 finish together on the season. The Canadian duo clocked-in at 1:55.41 on the 15-corner track for ninth.

“It was much better today in terms of what I wanted to execute on,” said Appiah, who was disappointed with her performance in the monobob race. “My focus today was putting down two solid runs.”

Sitting in sixth spot after their first run, Appiah and Walkeden dropped three spots after a challenging second blast down the 1,300-metre chute.

“While the second run wasn’t as good, it was a marked improvement over yesterday’s monobob runs. I feel my confidence in two-woman is creeping back up,” added Appiah.

Calgary’s rookie pilot, Bianca Ribi and Niamh Haughey (Whitby, Ont.) teamed up for a 12th place finish in the only other Canadian women’s sled. Ribi and Haughey joined forces to post a combined time of 1:55.54. They had the fifth fastest run in the final heat.

The Germans swept the women’s podium. Laura Nolte and Neele Schuten finished on top with a time of 1:53.74. Lisa Buckwitz and Kira Lipperheide were second at 1:54.09. Kim Kalicki and Leonie Fiebig locked up the bronze with a time of 1:54.20.

Canada’s Taylor Austin and his crew of Shaquille Murray-Lawrence (Scarborough, Ont.), Cyrus Gray (Duncan, B.C.), and Davidson de Souza (Calgary) teamed up for a ninth-place finish of their own in the four-man race.

The lone Canadian sled in the field were steady on the challenging Winterberg track, sliding to a time of 1:50.34.

“We executed the program well with two consistent runs,” said Austin, who added that he learned a lot during a week of ups and downs including a crash in training. “This is a fun but tricky track. It requires a lot of finesse and makes you really have to focus on the details to be fast.”

The 32-year-old Austin and his crew burst onto his first full season on the World Cup, winning the bronze medal at the season-opener on home ice in Whistler.

Working with the experienced Canadian coaches, including Olympic medallists, Lyndon Rush and Justin Kripps, Austin is continuing his development into an elite pilot while sliding into unfamiliar territory on new tracks around the world.

“We have great coaches and they have helped me move past the growing pains quickly,” added Austin. “For my first time in Winterberg, I’ll take the knowledge and look forward to being back for next year’s World Championships.”

Germany’s Francesco Friedrich and his crew of Candy Bauer, Alexander Schueller and Thorsten Margis won the men’s race with a time of 1:49.07.

Germany’s Johannes Lochner, Christian Rasp, Florian Bauer and Erec Bruckert slid to the bronze medal in a time of 1:49.27.