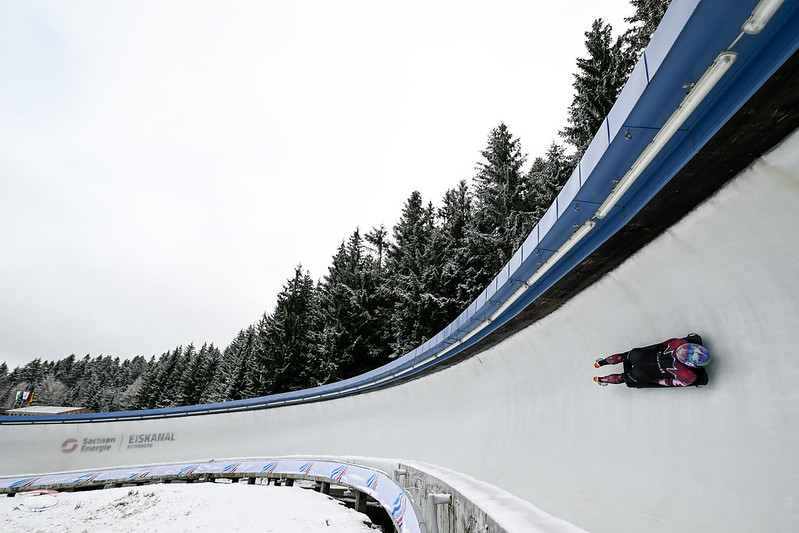 Struggling throughout her career on the monster of a track with only one top-10 finish, the 34-year-old Rahneva was poised to pounce onto the podium for the second-straight week on Friday but ended up matching a career-best fourth on the 17-corner track with a time of 1:57.16.

“I’ve certainly changed my relationship with this track. I’ve had a lot of fun looking at how to build speed instead of just trying to survive it. There is definitely lots to be proud of there,” said Rahneva, who credited bringing two sleds with her on the World Cup this season for her breakthrough in Altenberg.

Using a stiffer sled Friday to better handle the high pressure Altenberg corners versus her other sled that loves to climb and will take height early in corners rather than later, the Ottawa resident was sitting in second place after her first descent down the 1,413-metre track.

Hyped up on the starting block, Rahneva chalked up the third-fastest start time in the final run but could not carry her velocity to the bottom of the track, dropping her one spot off the podium for her fourth top-five finish of the season that includes a gold and silver medal.

“I feel like I’m on a new learning curve, and this track is a totally new place for me,” added Rahneva. “I’m really enjoying my sliding this season and hoping to keep building for a strong finish.”

Germany’s Tina Hermann continued her dominance in Altenberg, winning for the third time this season after clocking-in at 1:56.52.

Austria’s Janine Flock slid onto the podium for the first time since her return to World Cup racing in January. Flock posted a time of 1:57.14.

Germany’s Susanne Kreher edged out Rahneva for the bronze medal with a time of 1:57.15.

The solid fourth-place finish bumped Rahneva into second place in the overall standings as the world’s best skeleton athletes now travel to the birthplace of the sport in St. Mortiz, Switzerland for the World Championships. Rahneva has two victories and a third-place finish throughout her career on the famed track.

Rahneva’s teammate at the last two Olympic Winter Games – Jane Chanell – is also peaking with the premier event of the season around the corner.

The 34-year-old from North Vancouver mixed together two top-five starts with solid driving to finish sixth at 1:57.92.

A four-time medallist and one of the most explosive starters on the World Cup, Channell had her most consistent runs of the season as she works to find that elite form which saw her finish third overall on the World Cup in 2016.

Calgary’s Jaclyn Laberge rounded out the Canadian women’s performances in 20th spot at 2:01.45.

Two Canadians also hit the start line for the men’s race but did not qualify for the final run. Calgary’s Blake Enzie was 21st.  Saskatoon’s Evan Neufeldt slid to 23rd place.

It was an identical podium in the men’s skeleton race for the second-straight week.

Matt Weston, of Great Britain, won back-to-back with a time of 1:54.16. Two Germans grabbed the final spots on the podium. Christopher Grotheer was second at 1:54.51, while Axel Jungk was slid to a time of 1:54.54 to lock up the bronze medal.