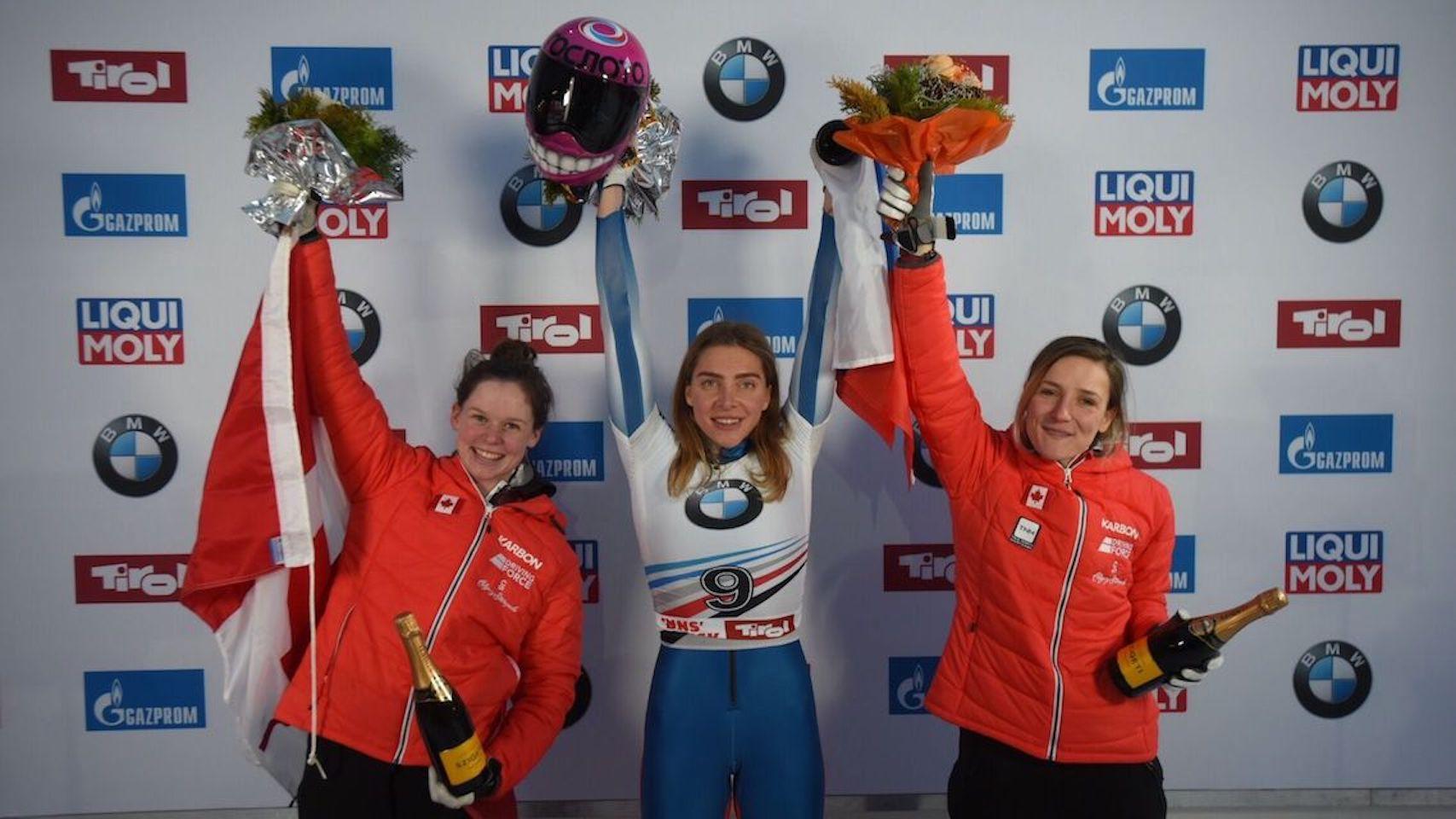 IGLS, Aut.—Canada’s Elisabeth Vathje and Mirela Rahneva made a statement sliding into the holiday break with a silver and bronze medal performance at a World Cup in Igls, Austria on Friday.

It was the third silver medal of the season, and second in as many weeks for Calgary’s Vathje. It was the first podium of the year for Ottwa’s Rahneva. The Canadian duo also shared the podium one year ago at a World Cup in Winterberg, Germany when Vathje won gold and Rahneva the bronze.

“The only thing better than sharing the podium with Mimi, would be to share it with both Mimi and Jane (Channell),” said the 23-year-old Vathje. “I think it shows the strength in our program, and we are here to fight. All three Canadians moved up from their spots after the first run and that shows the tenacity in our team.”

Vathje was sitting in third spot after her first trip down the flat 1,478-metre chute in Austria. A model of consistency, the nine-time World Cup medallist moved up one more spot on the podium after clocking the third fastest time again in the final heat, finishing with a combined time of 1:49.38.

“For me it is sometimes hard to attack on the first run so I knew going into the second run I could fight to move up – especially with a push improvement,” said Vathje, who knocked .07 of her start time in the second heat.

“Igls is a tricky one. It is easy to get down, but hard to be fast. You need to have a good combo of equipment, push and very gentle driving.”

Mirela Rahneva joined in on the Canadian celebration while sliding to her first podium of the 2017 season, and her fifth career medal on the World Cup. Sitting in seventh spot after the opening run, the 29-year-old rocked the final heat, posting the second-fastest down time to climb four spots on the field into third at 1:49.44.

“Before the race, I definitely had my sights set on a podium finish. After coming seventh in the first heat, I really tried to concentrate and visualize the track. I knew from last year that I can race well here,” said Rahneva, who won the silver medal in Igls last season.

North Vancouver’s Jane Channell up a fight to slide her way into 14th spot. Not showing any quit after clocking the 17th fastest time in the opening heat, Channell picked up three spots on the field in the second run to post a combined time of 1:50.23.

The overall standing is proof Vathje and the Canucks can win on all types of tracks around the world – from highly-technical tracks like Whistler and Lake Placid to a tricky track in Winterberg to flatter tracks like Igls.

“It is all a really good learning experience, taking skills from different tracks and learning to apply them elsewhere helps. It’s also been a learning process on how to focus better, and bring fire when needed,” said

In the men’s race, it was Dave Greszczyszyn leading a trio of Canadian men with a time of 1:47.75. Coming off his first podium of his career last week, the Brampton, Ont. Native clocked-in at 1:47.75 to finish 14th.

Kevin Boyer, of Sherwood Park, Alta., placed 20th at 1:48.46. Calgary’s Barret Martineau did not qualify for the second run with the top-20, placing 21st.

The World Cup continues on Saturday in Igls with the women’s and two-man bobsleigh races.