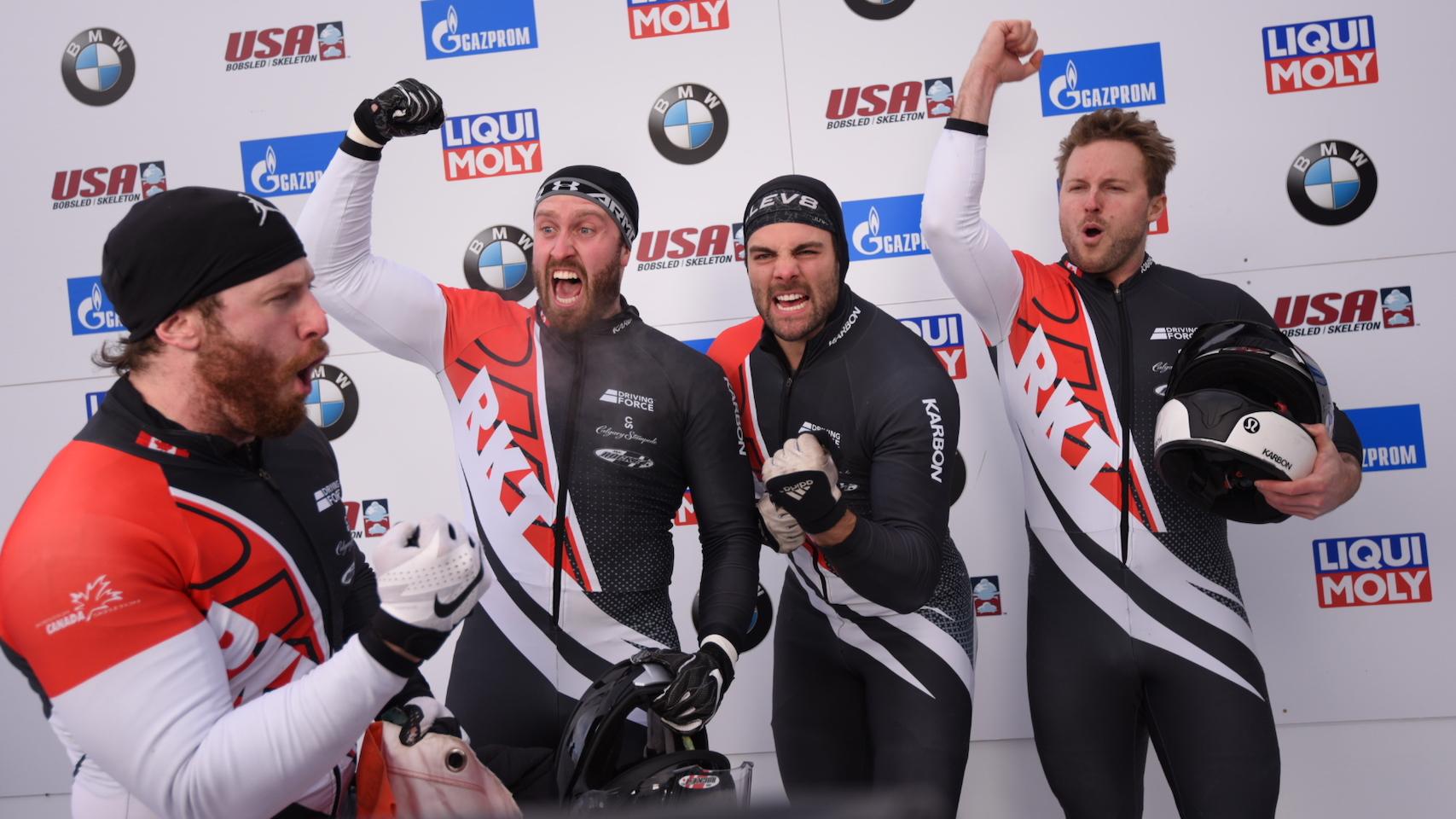 Fresh off his third two-man medal of the season on Friday, the 32-year-old Kripps (Summerland, B.C.) took advantage of a huge second-run start from his crew of Cam Stones (Whitby, Ont.), Ben Coakwell (Saskatoon), and Ryan Sommer (Calgary) to battle back from fourth after the first heat to finish on top of the international field.

“That was crazy. It was just an awesome day with the boys,” said Kripps. “I thought after the first run we had a good shot. I knew the boys could push faster than we did in the first run, and they did. I’m just so happy for all the team.”

The Canadians clocked the third-fastest second-run start time at 5.03, and the top down time at 54.75 to secure their first ever four-man title.

“When I came down and saw the time, I knew we had a good shot,” added Kripps. “We have been working really hard on the four-man. I haven’t had much success in the past, but the crew is really coming together and have been pushing well. We are just starting to gel right now, and we will build on this momentum to the final races on home ice (Calgary and Whistler).”

The Canadians topped Latvia’s Oskars Kibermanis, Janis Strenga, Arvis Vilkaste and Matiss Miknis by .07 seconds for top spot. The Latvians finished with a time of 1:49.61.

It was the fifth time Kripps has driven to the World Cup four-man podium in his career. He had three silver medals in Igls, Lake Placid and Park City last year. He also had a bronze on the 20-corner Lake Placid track two years ago.

Fellow Olympians Cam Stones, 27, and 31-year-old Ben Coakwell were also a part of that four-man success over the last two seasons. Saturday’s thrilling win was Stones’ second career four-man podium, while Coakwell now has four medals around his neck.

On Saturday, the boys completed their mission of getting 25-year-old rookie, Ryan Sommer, his first World Cup medal.

“This feels so awesome. It is my first time in Lake Placid and first year on the World Cup tour so for my first medal to be gold is amazing,” said Sommer. “After the first run, we felt it was in our hands to get on the podium.

“We knew if we stepped it up on the push, Kripps could throw down a really good run and it worked out.”

A former track and field thrower, who hails from White Rock, B.C.,  Sommer soaked in the leadership of the medal-winning athletes in Canada’s bobsleigh program which he will take with him to the final World Cup event of the season set for Canada Olympic Park, February 22-24, before heading to the Whistler Sliding Centre for the World Championships, February 25 – March 10.

“I have learned so much from these guys. There is so much knowledge and experience in our sled with all of the guys (Kripps, Coakwell and Stones). I have such a great team to work with and I am just trying to learn as much as I can,” said Sommer.

“It is just amazing to know that we can perform with the best. Knowing we are on home ice for the final two races, and having World Championships in Whistler, this result is really motivating.”

Nick Poloniato drove his crew of Patrick Norton, William Auclair and Kostelnik Teodor to 18th at 1:51.00.

Earlier in the day, Dave Greszczyszyn, led the Canadians with a 15th-place result in men’s skeleton. The Brampton, Ont. native slid to a two-run time of 1:49.29.

Kevin Boyer, of Sherwood Park, Alta., finished 18th at 1:50.00, while Calgary’s Kyle Murray, did not qualify for the second run with the top-20, finishing 23rd.

Russia’s Alexander Tretiakov won the men’s race with a time of 1:47.19.