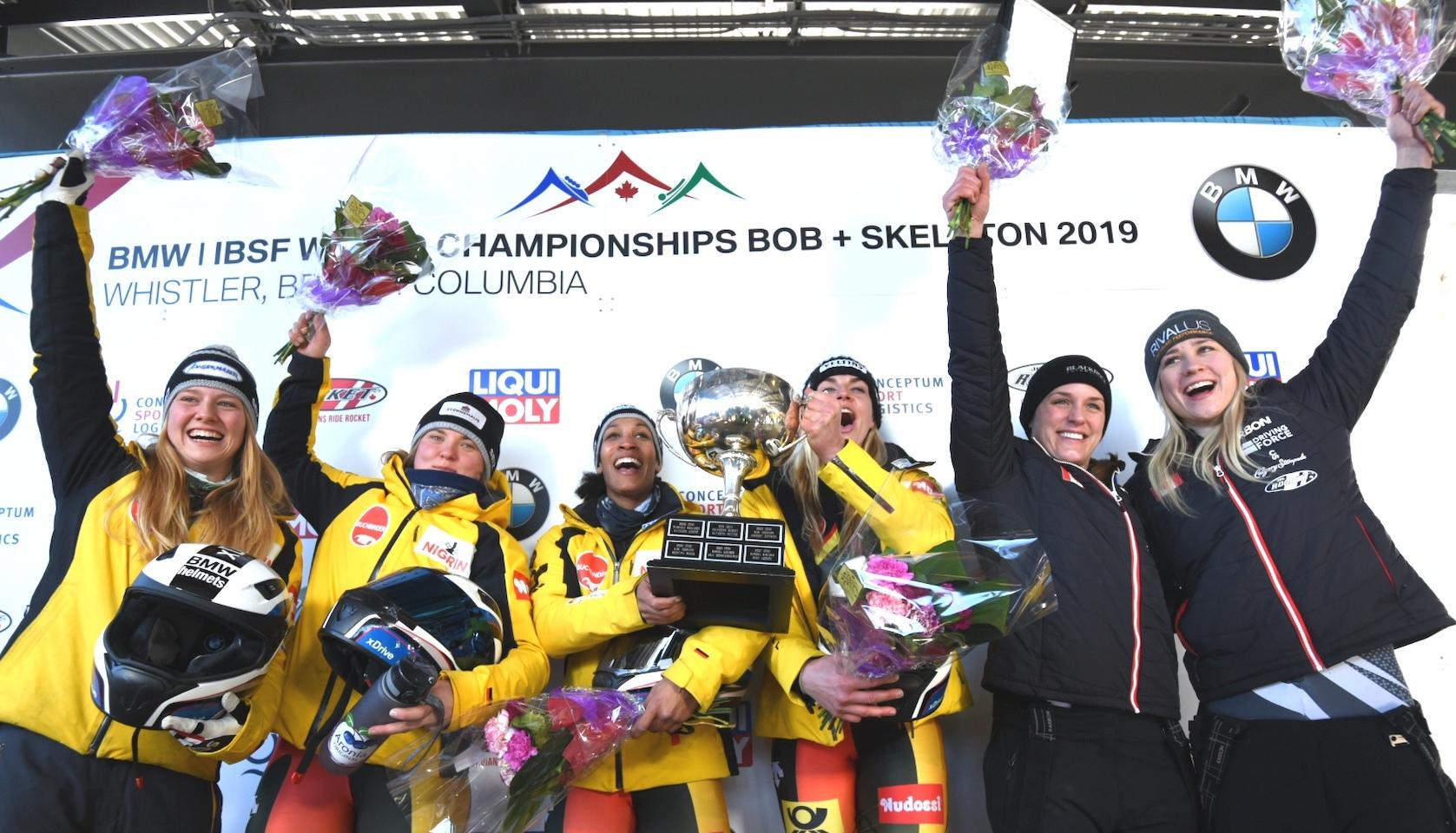 The Canadian duo capped off a dream season by winning the bronze medal in an action-packed women’s race that witnessed lead changes, crashes and high speeds in the four runs held over two days on the 16-corner track.

“A bronze medal at World Championships is amazing,” beamed the birthday girl, who was showered by champagne, presented with a cake and serenaded with a rendition of Happy Birthday by the tight-knit Canadian women’s squad once getting out of her sled.

“I just wanted to put solid runs together, and we did that today with awesome pushes as well. This is for sure the best birthday ever!”

The Canadians finished with a four-run combined time of 3:31.25.

de Bruin, of Stony Plain, Alta., and Bujnowski (Mount Brydges, Ont.), came into the final day sitting in fourth-place. Colder temperatures on Sunday morning made for faster ice which challenged the world’s best mentally and physically.

“This is my ice. I love it like this,” said de Bruin. “This is what we’ve been training on. I was struggling with all that sticky stuff before, and then today was perfect. This is what I know and I just felt ‘let’s go out and do it.’”

The door opened to the podium for the Canadians when multiple Olympic and World Championship medallist, Elana Meyers Taylor from the United States, crashed on her third run.

“It is so mentally tough at the World Championships or Olympics where you have to go out there and be consistent and disciplined for four straight runs over two days,” added de Bruin. “We are not used to that. It is tough to do. You get tire and recovery is key.”

The top-two German sleds nailed their four runs down the track to win the gold and silver medals. Mariama Jamanka and Annika Drazek dusted the field with a time of 3:30.08. Stephanie Schneider and Ann-Christin Strack were the next best finishers in second place at 3:31.14.

de Bruin and Bujnowski, who teamed up at the beginning of the post-Olympic season, have served a warning shot to the world they will be in the medal mix on the track to 2022 Beijing.

In both of their World Cup starts together this season, the two Canucks slid onto the podium. Their first career silver medal triumph came in Altenberg, Germany. Competing once with separate teammates in Konigssee, the duo reunited weeks later for another trip to the second-place step on the podium in Lake Placid.

“Having Buj (Bujnowski) in my sled has been amazing. She is so chill and helps me brush off a bad run,” said de Bruin. “She is always there to tell me to forget about things and is always focusing on the positive. That is huge for me.”

Quickly developing into one of the most explosive brake women in the world in just her second year with the national program, the 26-year-old CrossFit buff thrusted the Canadian sled to top-five starts in each of their four World Championship runs.

The Canadians were fastest off the block at 5.15 in their second run. They posted the second fastest time in the final heat at 5.16, leading them on a bronze medal trip down the quickest ice in the world where they reached peak speeds of 148 kilometres/hour.

“This feels so great. There has been lots of pressure on us to come in here and perform. We felt that a lot yesterday, but I feel like today we were able to shake it off,” said Bujnowski. “The conditions were more what we were familiar training in and we were excited to race. Christine was ready today and we both performed well.”

The 2019 BMW IBSF World Championships Bob & Skeleton Whistler resumes Sunday afternoon with the team event. Athletes will train over the next three days before the men’s and women’s skeleton races hit the track on Thursday. The four-man bobsleigh event will take centre stage on March 8-9.