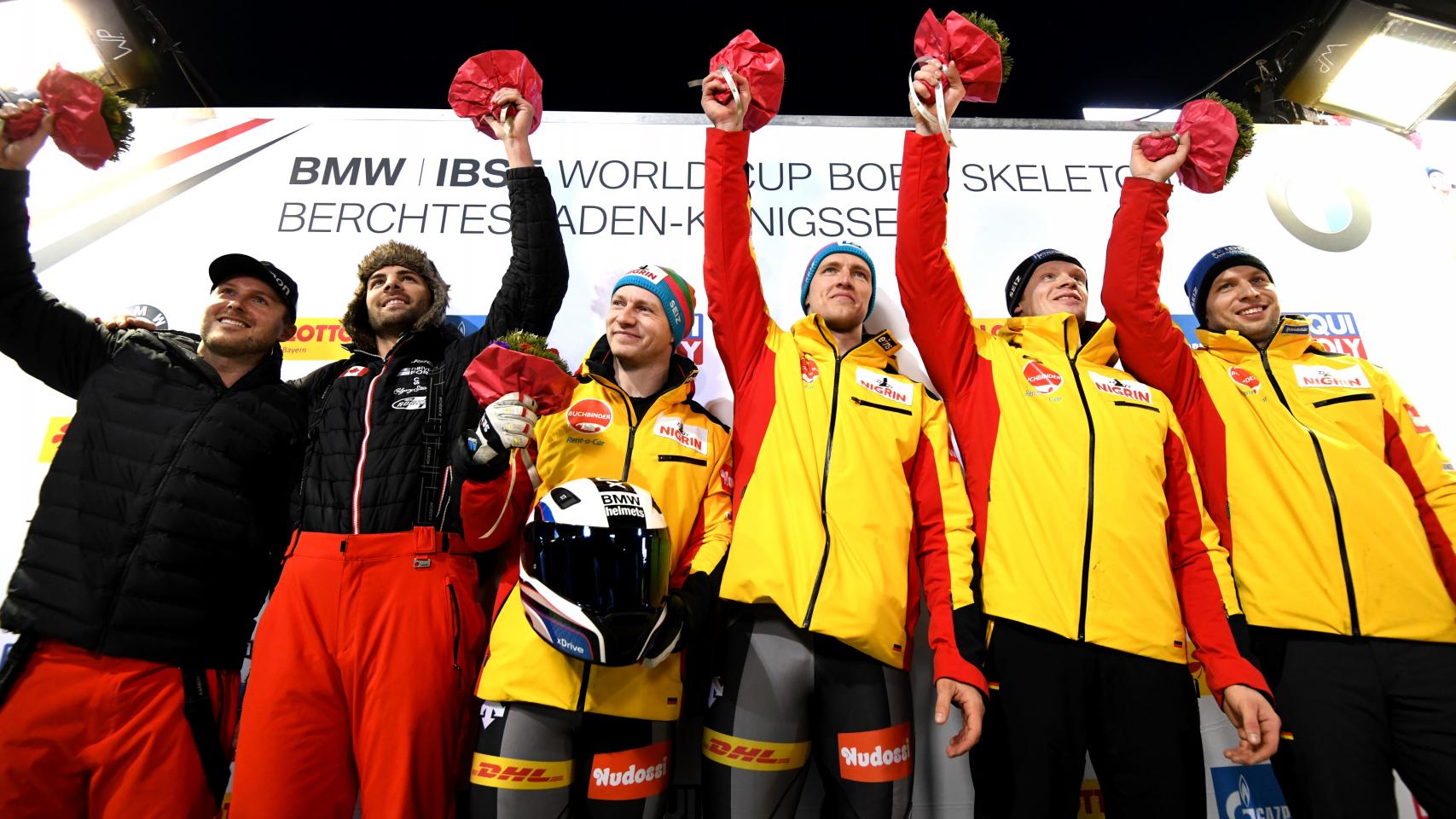 KONIGSSEE, Ger.—Canada’s Justin Kripps continued his love affair with the bobsleigh track in Konigssee by winning his fifth career medal on the German track.

The 32-year-old Olympic champion teamed up with Cam Stones (Whitby, Ont.) to win the silver medal Saturday on the 16-corner sheet of natural beauty in the Bavarian Alps. The Canadian duo posted a two-run time of 1:39.17.

“That was a fun one,” said Kripps following his 15th career World Cup two-man medal. “It was such a tight race, so I was really happy to get back on the podium.”

The lone Canadian sled was forced to fight back for a spot on the podium following some bad luck at the start of opening run on the 1,675-metre track where they clocked the second-fastest push time.

“We came out of the groove on the first run and hit the side wall pretty good, so I was happy to see we were fourth at the bottom and not completely out of it,” added Kripps, who now sits second overall in the World Cup two-man standings. “Cam gave me another good push in the second run. I just wanted to get in and hold the ropes to make sure I didn’t get kicked out to the side again.”

Sitting just .09 seconds off the podium after the first heat, Kripps was determined to drive to his third podium of the season.

“I knew if I had a nice smooth run, and hit my lines then I’d be good,” added Kripps, who posted the second-fastest final run time at 49.61.

The Canadians climbed ahead of two German sleds in the second heat but couldn’t catch fellow Olympic champions, Francesco Friedrich and Thorsten Margis, who posted a winning time of 1:38.66. Germany’s Nico Walter teamed up with Malte Schwenzfeier for the bronze medal at 1:39.19.

It was the second World Cup two-man podium of the season for the 28-year-old Stones, and fifth of his career in addition to the silver he won with Kripps at the 2019 World Championships.

“I’m really happy we were able to have a competitive start after a couple of down weeks,” said Stones. “Kripps nailed his runs today, and it feels good to get back in the medals. Things are starting to shape up well for World Championships.”

After opening the season with two bronze medals in two-man racing – one with Stones on the brakes, Kripps has struggled in the last two races where he has finished well back of the leaders in the Canadian two-man sled.

Not ready to panic the composed Canuck has had Konigssee marked on his calendar – a track that has been a home-away-from home for him throughout his career – as a key indicator of where he stood.

“I know the Germans are good at the start and have great equipment, so everything has to go perfect for us to have a chance,” added Kripps. “Given my success on this track, I used this a bit of a benchmark race and thought that if we didn’t do well here then I’d have reasons to be concerned.”

His first career World Cup podium in the driver’s seat came on the German track in 2014 when he won the race just prior to the Sochi Olympic Winter Games. Not only did he also slide to a bronze medal in 2015, but he also locked up his 2018 Overall World Cup two-man title last year with a bronze-medal on this track. His first career World Championship medal in 2017 also came in Konigssee.

“I have so much fun driving this track and to be able to say that at this stage of my career is a good thing. I just love the big ‘S’ curves here. The first time I drove here, I came with Pierre Lueders who was teaching me to drive and he explained the track really well then – how to hit these corners to get the good speed you need to the finish.”

Earlier in the day, Canada’s Christine de Bruin and Kristen Bujnowski were also enjoying the Konigssee track while eying down their first World Cup victory in the women’s race.

The lone Canadian sled was in a tie for top spot with the Germans after clocking a time of 50.85. Clocking fifth-place 5.29 push times in both heats, de Bruin wasn’t able to make up time on a tight leaderboard in the final heat where .15 seconds separated the top-four sleds. The Canadians were edged off the podium in fourth at 1:41.72.

Kaillie Humphries and Sylvia Hoffmann, of the United States, squeaked out the victory with a time of 1:51.57. Germany’s Laura Nolte and Erline Nolte were second at 1:41.60. Stephanie Schneider and Ann-Christin Strack, also of Germany, slid to the bronze with a time of 1:41.66.

The World Cup continues on Sunday in Konigssee with the four-man race.