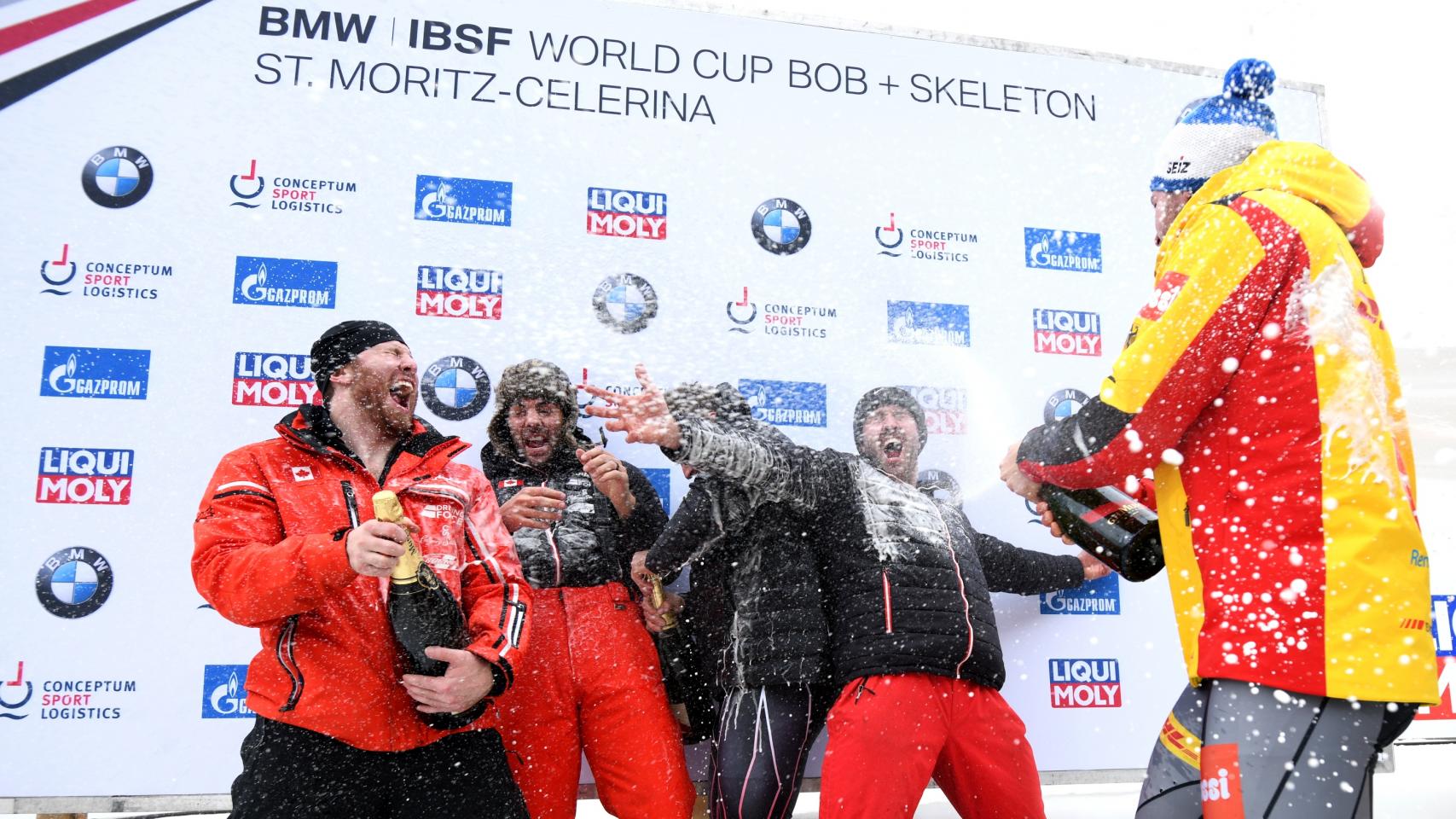 ST. MORITZ, Sui.—Canada’s men’s bobsleigh squad capped off the four-man season the way they began it – on top of the World Cup podium.

Justin Kripps (Summerland, B.C.), Ryan Sommer (White Rock, B.C.), Cam Stones (Whitby, Ont.), and Ben Coakwell (Saskatoon) came from behind to win the most prestigious race on the World Cup circuit at the birthplace of the sport with a two-run time of 2:11.12.

“This is awesome. I have been trying to win in St. Moritz since the first time I came here in 2007. That was a big day for us,” said Kripps. “We had two good runs, good pushes and the boys really stepped up in that second run to drop the start time. That was big time, and I really believe allowed us to get the victory.”

It was the first career four-man podium for the 32-year-old Kripps and his crew on the only non-refrigerated track in the world. The reigning Olympic two-man champion has never cracked the top-10 on the 1,700-metre chute of natural ice that winds its way to the finish line in the town of Celerina.

“We haven’t had the best of luck here, but this is for sure one of the biggest moments as a team in the four-man,” added Kripps following his eighth-career World Cup four-man podium. “It doesn’t get any better than this. It is the birthplace of bobsleigh. It is like Monaco for the Grand Prix. There is so much history here. It is the biggest race of the year for us.”

The Canadians were in second spot after the first heat, but a fourth-place start time in the final run provided the velocity Kripps needed to finish on top.

“I had tweaked my groin, so I was pretty taped up and honestly was just hoping not to slow the sled down on the push,” said Kripps. “I was feeling pretty good. Once I jumped in, I just wanted to fix any skids.

“Everything was going really well, hitting good lines, and when we came out of horseshoe we were really moving. On the finish straight away, I was thinking – ‘there is no way anyone is going this fast. It has to be enough,’ and it was.”

The Canucks topped the Latvian team of Oskars Kibermanis, Lauris Kaufmanis, Arivs Vilkaste, Matiss Miknis who finished second at 2:11.25. Germany’s Johannes Lochner and his crew of Florian Bauer, Christopher Weber and Tobias Schneider were leading the race at the midway point but dropped to third after struggling down the track in the final run. The Germans posted a time of 2:11.46.

It has been a stellar end to the World Cup four-man season for the burly Canucks. After opening the season with back-to-back victories in the four-man sled in Lake Placid, Team Kripps slid onto the four-man podium for the first time in both Konigssee, Germany last weekend and on Sunday in St. Moritz.

The four-medal haul throughout the World Cup season locked up third spot for the Canadians in the Overall World Cup standings.

“It is really awesome to finish third. We had many retirements after the Olympics, and this was supposed to be a down time for our program being only year two in the quad,” said Kripps, who missed out on the overall World Cup four-man podium by just one point in 2018. “These team has really stepped up and come together which is pretty cool. It means a lot to us to finish on the overall podium.”

The Canadians have credited hard work and a cultural change within the program as the reason for the medal-winning performances.

“Everyone on our team knows their role. We know when to step in and when we should step out. We also hold each other accountable when we are out of line. I can’t underestimate the power this has on not only our four-man team, but in the success of our entire program,” said Olympian Ben Coakwell following his eighth career podium.

“From purely a cultural, winning formula basis, absolutely I believe this is one of the best four-man teams Canada has ever put together.”

Kripp’s crew was formed following the 2018 Games with Olympians Coakwell and Stones, who have both also been tapped to push the Canadian sled in two-man. Ryan Sommer joined the program last year and now has five four-man podiums. The team also won bronze at the 2019 World Championships on home ice in Whistler.

Canada’s bobsleigh and skeleton program enjoyed a solid weekend in St. Moritz. Mirela Rahneva (Ottawa) kicked things off with a fourth-place finish in the women’s skeleton race. It was the fourth time this year she has finished one spot off the podium. Christine de Bruin (Stony Plain, Alta.) and Kristen Bujnowski (Mount Brydges, Ont.) were fifth in the women’s bobsleigh as were Justin Kripps and Cam Stones in the two-man bobsleigh event.

The World Cup circuit now travels to Sigulda, Latvia next weekend before the World Championships in Altenberg, Germany which begin on February 21.