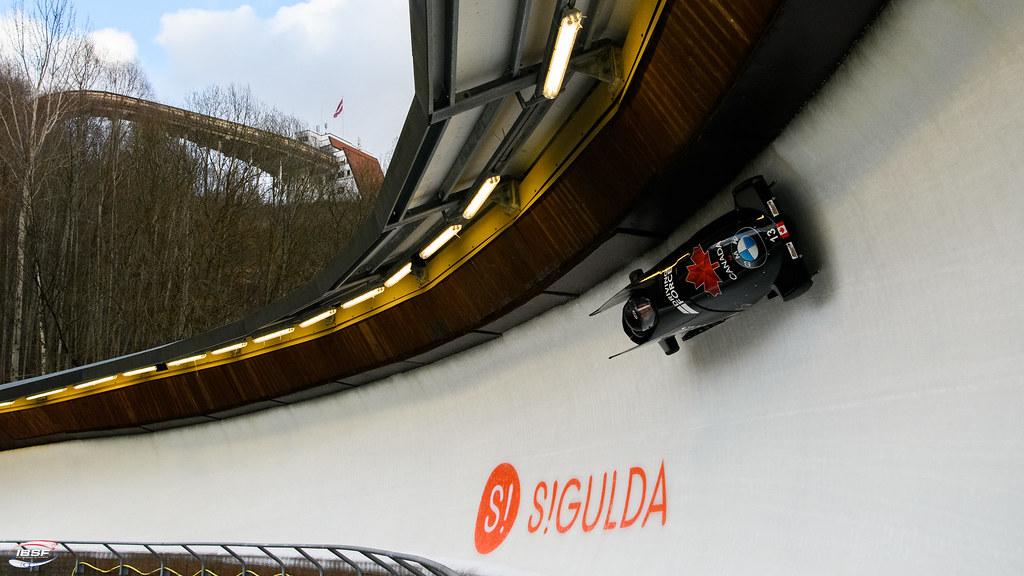 Sitting in fifth place after their first blast down the 1,200-metre track, the Canadian duo landed on the final spot of the podium after two sleds ahead of them crashed in the final heat. The Canadians clocked a two-run time of 1:39.53.

“It was a pretty crazy race with a couple of crashes, and we were just trying to be consistent,” said the 33-year-old Kripps. “It worked out because we were fast at the bottom. This is a really fun, very technical track. We will need to find more speed at the top tomorrow (to finish off on the podium).”

Oskars Kibermanis and Matiss Miknis opened the doors to a Latvian party in Sigulda with their first two-man victory of the season. The Latvian duo climbed one spot up the standings in the final run to the top of the podium after mastering the 16-corner track with a two-run time of 1:39.20. Germany’s Francesco Friedrich and Martin Grothkopp settled for the silver at 1:39.27.

It was the 16th career World Cup two-man podium for Kripps, the reigning Olympic champion from Summerland, B.C. It was his second podium with Saskatoon’s Ben Coakwell on the brakes. The 32-year-old two-time Olympian also won a bronze with Kripps at the season-opener in Lake Placid this year. Kripps also has a bronze and a silver in two-man racing with Cam Stones (Whitby, Ont.) this season.

The Canadian sled sits in second place overall with just one race to go on Sunday where the Crystal Globes will be awarded to the overall leaders on the World Cup.

De Bruin (Stony Plain, Alta.) piloted the Canadian sled to a top-five finish for the seventh time in eight races after finishing fifth with a two-run time of 1:42.30.

De Bruin and the 27-year-old Bujnowski from Mount Brydges, Ont., won a bronze medal in Lake Placid as well as a silver in La Plagne, France this year.

“Finishing third to me means that we have arrived,” said the 30-year-old de Bruin. “We are still working hard and continuing to improve, but it shows we are consistent and the work we have already put in is starting to pay off.”

Russia’s Nadezhda Sergeeva and Elena Mamedova finished on top with a time of 1:41.96.

Germany’s Stephanie Schneider was the overall winner on the World Cup for 2020 after racking up one gold, one silver and four bronze medals. The German sled never finished outside the top-five all year.

Latvia’s Martins Dukurs defended his home track, winning the gold with a time of 1:40.09.