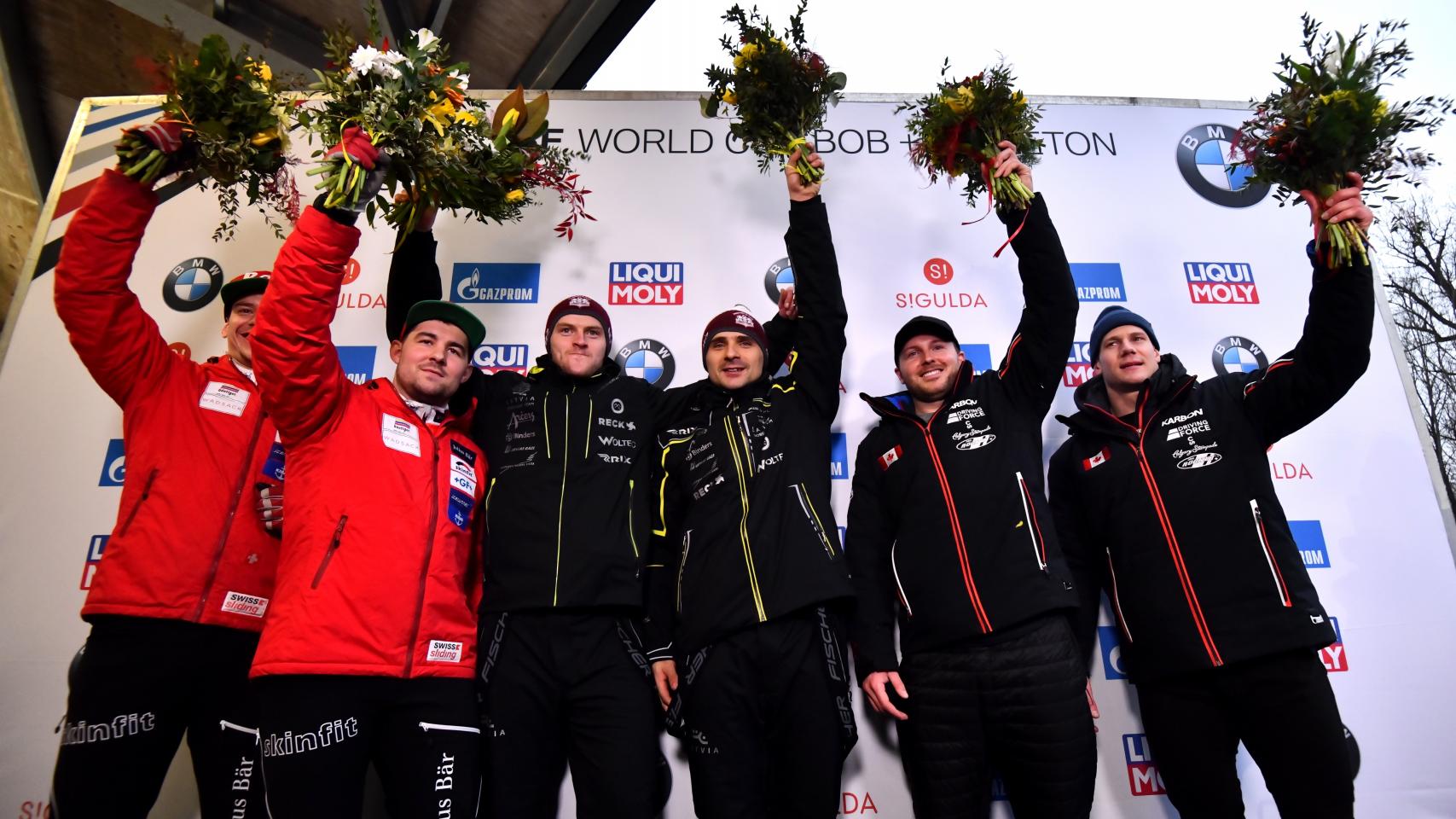 It was a new day, new brakeman, and the exact same result for Canada’s 33-year-old Justin Kripps who piloted the Canucks to the final step of the podium on Sunday in Sigulda, Latvia.

The reigning Olympic champion, who was third in Saturday’s two-man race with Ben Coakwell, joined forces with CFL wide receiver, Sam Giguere, for the first time to clock a two-run time of 1:39.59.

“It was really good today. These are the first races we have had on this track, so we were just trying to get in the medals. We managed to get on the podium in both races, so we achieved our goal,” said Kripps.

It was the 17th career two-man medal for Kripps, and first ever for Giguere who rejoined the Canadian squad following the holiday break. The Canadians have been resting Cam Stones, who is regularly on the two-man brakes, for the World Championships.

Similar to Saturday’s race, the Canadian duo were in fifth place after their opening run down the technical 16-corner chute in Latvia. They clawed back onto the final step of the podium after putting down the second-fastest time in the final heat at 49.81.

“The ice conditions were a bit different for the first few sleds who had a bit of an advantage today. We had two good pushes and two good drives,” added Kripps. “This is a driver’s track. It is similar to Lake Placid in that it is very busy, there is lots of driving to do, but you also have to let the sled run.”

Oskars Kibermanis and Matiss Mikniss swept the golden step of the podium in front of thousands of screaming fans that lined the ice over the weekend. The Latvian’s posted the time to beat at 1:39.18. Switzerland’s Simon Friedli and Gregory Jones were second at 1:39.54.

One of the most consistent athletes on the circuit, Kripps along with three Canadian brakemen – Giguere, Coakwell (Saskatoon), and Cam Stones (Whitby, Ont.) – also finished third in the Overall World Cup two-man standings. Kripps piloted the Canadian sled to five podiums – four bronze and one silver – in eight races this season to lock up the Crystal Globe.

“It’s good to know we are always fighting for the podium in every race,” said Kripps, who was second in the combined standings thanks to his third-place finish in the overall four-man rankings.

“Finishing on the podium in the overall shows the level we are at. We had a couple of throw away races where we were trying different things to get better that maybe held us back from second overall but I’m happy to get another Crystal Globe.”

Meanwhile, earlier in the day a trio of Canadians hit the start line for the final women’s skeleton race of the season.

North Vancouver’s Jane Channell was the top Canuck, placing 16th at 1:45.78. Ottawa’s Mirela Rahneva and Calgary’s Madison Charney did not qualify for a second run with the top-20 sleds. Rahneva, who placed fith in the overall standings, was 21st on Sunday, while Charney was 25th.

Russia’s Elena Nikitina won the women’s skeleton race with a time of 1:43.87.

The top bobsleigh and skeleton athletes on the planet now head to Altenberg, Germany for the World Championships beginning February 21.