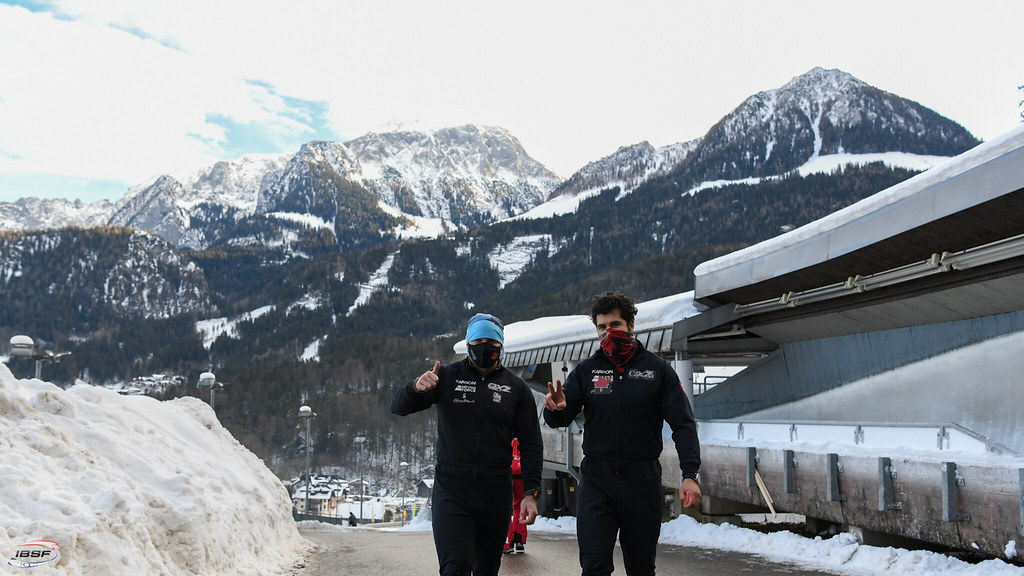 Canadian Bobsleds Edged Off Podium at World Cup in Germany

Christine De Bruin (Stony Plain, Alta.) teamed up with rookie brakeman Sara Villani (Norval, Ont.) to match her career-best fourth-place finish on the 16-corner track in the Bavarian Alps. The Canadian duo enjoyed their best result in their short, three-race season to date, clocking in at 1:42.27.

De Bruin and Villani were just .10 seconds off the podium.

The Germans slid to the top-two steps of the women’s podium. Kim Kalicki and Ann-Christin Strack set the time to beat at 1:41.71. Stephanie Schneider and Tamara Seer were second at 1:41.96. Americans, Elana Meyers Taylor and Sylvia Hoffman, topped the Canucks for the bronze with a time of 1:42.17.

Two Edmonton women – Alysia Rissling and Dawn Richardson Wilson – also had a solid outing. Competing in just her second World Cup race in more than a year, Rissling drove to an eighth-place finish (1:42.42) thanks to rock solid pushes from Wilson who is competing in her first full season on the World Cup.

After posting the fourth-fastest start times, Team Kripps was not able to find the fast line to the podium on a track they’ve enjoyed great success on throughout their career.

Sitting in third place in the Overall World Cup four-man standings, it was the first time in three races the Canadian sled did not finish on the podium.

“I got bit in the snake pit today, but I’m still smiling,” said Kripps after making his way to Igls, Austria for the next stop on the World Cup.

“We obviously want to be competing for the medals every week, but we have to start somewhere and today was a good indication that we have a lot of talent and ability,” said Spring, who took last season off to rest his body and start working on his pilot’s license to fly airplanes. ‘Now we just need to keep building on (today’s result). I was happy with our performance, especially on a track that I’ve traditionally struggled at.”

Germany’s Francesco Friedrich finished on top of the podium with his crew of Thorsten Margis, Alexander Schueller and Martin Grothkopp after posting a time of 1:37.45. Austria’s Ben Maier, Danut Moldovan, Markus Sammer and Sascha Stepan were .39 seconds off the pace in second (1:37.84). Germany’s Johannes Lochner, Christopher Weber, Florian Bauer and Christian Rasp snagged the bronze medal with a time of 1:37.97.