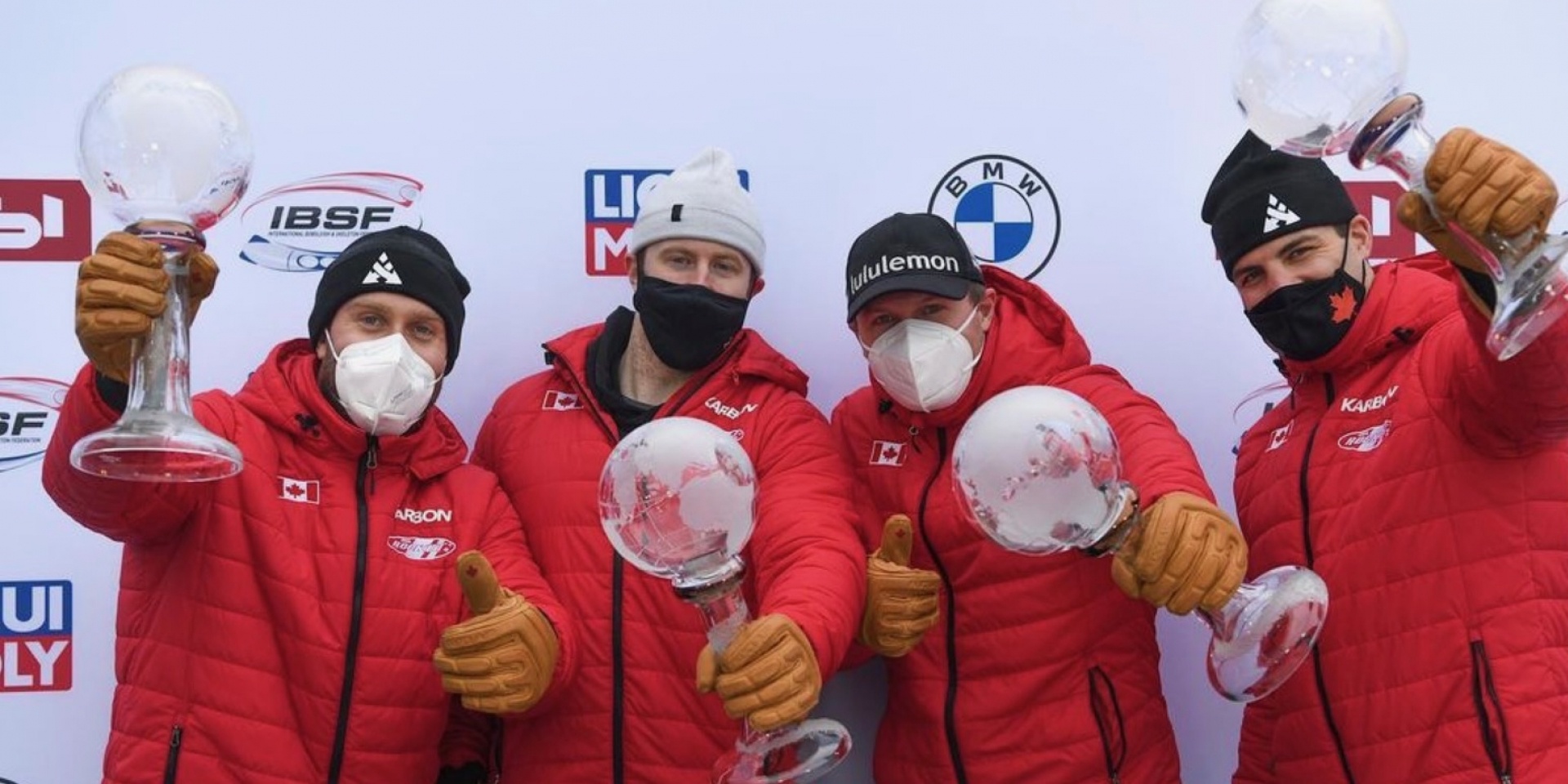 IGLS, Aut.—Justin Kripps and his Canadian crew locked up third place in the Overall World Cup four-man standings for the second straight year after sliding to the bronze medal on Sunday in Igls, Austria.

The Canadian crew captured a silver and two bronze medals in just four starts in the condensed four-man season this year due to the COVID pandemic.

“We didn’t set any overall goals this year. We always want to be hunting down the podium but with COVID situations this year, it was all about building some momentum and seeing what we need to work on,” added Kripps. “We’ve absolutely accomplished that goal, and we’re feeling great heading into the World Championships.”

Germany’s Francesco Friedrich, Thorsten Margis, Alexander Schueller and Candy Bauer won in Igls with a time of 1:42.08. Austria’s Benjamin Maier, Markus Sammer, Kristian Huber and Danut Moldovan topped the Canadians in the silver-medal position with a time of 1:42.30.

It was the 11th career four-man podium of Kripps’ career and just his second on the 1,478-metre track in Igls which puts a premium on the start.

“Our crew had a game plan coming into this race which we executed quite well,” said Ryan Sommer – the youngest member of the crew at 27 years old. “The mission this year was to build momentum going into the Olympic year. Three podiums in four races gives us confidence in a year full of uncertainties. From Justin’s driving to the brakemen executing competitive pushes to the support staff making sure we were taken care of we were able to secure our second Crystal Globe as a four-man team.”

The Canadian crew has now racked up eight four-man podiums in addition to their bronze at the 2019 World Championships crew since hopping into the same sled together following the 2018 PyeongChang Olympic Winter Games.

Two of Canada’s women’s sleds driven by developing pilots, Cynthia Appiah and Melissa Lotholz, sent a warning shot to the world they have officially arrived on the elite racing scene after both finished in the top-five on Sunday afternoon.

“This feels amazing. I was super disappointed in my second run yesterday, so this was some redemption for me,” said Appiah, who was also fourth in Saturday’s women’s monobob race. “I know this track well enough even though I haven’t had much racing experience here, so I knew if I just relaxed, pushed well and had two consistent runs I’d be okay.”

She did just that.

The Canadian duo, who share Ghanaian roots, mixed it up with the best names in women’s bobsleigh clocking a two-run time of 1:47.15. They jumped into fourth after posting the second-fastest final run time at 47.60.

“That second run was so sweet,” said Appiah. “I was a bit surprised at the bottom of the first run to see how close I was to the top of the podium especially starting 16th on a track that deteriorates quickly. To see myself tied for fourth with the Germans and so close to the podium, I was like, ‘I got this.’ That motivation led into the second run.”

It was the 30-year-old Appiah’s second World Cup two-woman race since moving into the driver’s seat after the 2014 Olympics. Competing in her first full World Cup season, it was Richardson Wilson’s fourth ever start on the elite circuit.

Sharing Ghanaian roots, the two Canucks are developing into another dominant force in women’s bobsleigh.

The duo shattered the field at the start on Sunday, exploding off the block in both runs with times of 5.54 and 5.52.

“Dawn has put in a lot of work. To hear what she had to go through this summer holding multiple jobs just be able to afford this season shows her work ethic,” said Appiah. “She surprised a lot of people in testing, and has shown over the course of the season, she’s got what it takes and not to count her out. We work so well together so I was really excited to get the opportunity to race with her again this weekend.”

The Canucks fished just .08 seconds off the golden pace (1:47.07) set by veteran pilot Kailllie Humphries and Lolo Jones of the United States. Elana Meyers Taylor and Lake Kwaza, also of the United States, were second at 1:47.11. Austria’s Katrin Beierl and Jennifer Onaasanya edged out the Canadians for the bronze medal with a time of 1:47.13.

“Inside our Canadian team, the Olympic season has started now. I feel like we have done a really good job of solidifying ourselves today (as a strong contender),” added Appiah. “Being .08 from gold and so close to the bronze, it definitely builds your confidence up. We are going to do everything we can over the next year to try and qualify three sleds for Beijing.”

Coming off a first-ever bronze-medal finish in Saturday’s monobob race, Melissa Lotholz (Barrhead, Alta.) capped off a stellar weekend with a fifth-place finish in just her second World Cup race as a pilot. The 28-year-old teamed up with Sara Villani (Norval, Ont.) to clock a combined time of 1:47.35.

Team Lotholz was in seventh spot after the first heat. They jumped two spots up the standings thanks to a solid second run.

Edmonton’s Alysia Rissling and Erica Voss (Toronto) slid to 11th place with a time of 1:47.77.

Canada’s top pilot, Christine De Bruin, did not start this weekend’s World Cup race. De Bruin is training in Altenberg, Germany for the 2021 World Championships which will be held over the next two weeks.