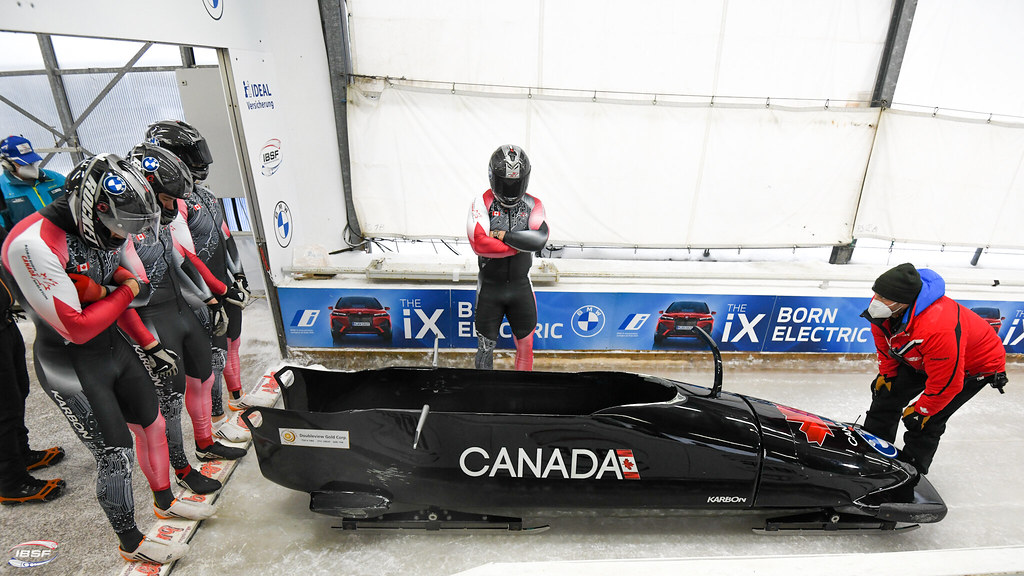 ALTENBERG, Ger.—Canada’s Cynthia Appiah and Justin Kripps’ four-man team showed no quit in a tough fifth-place battle on one of the most challenging tracks on the planet while finishing fifth in both the women’s monobob and four-man bobsleigh competitions to cap off the 2021 World Championships in Altenberg, Germany.

Appiah, a developing pilot out of Toronto, officially put her stake in the ground as a contender heading into the Olympic year after clocking a fifth-place, four-run time of 4:01:28 in women’s monobob.

“I am thrilled. This week was probably the work week I have had in bobsleigh. I crashed four out of six times in training, and was on the cusp of not competing. I was feeling down in the dumps and just wanted to throw in the towel, but day one (of the race) went surprisingly well and it gave me a little more confidence,” said Appiah.

The 30-year-old was in sixth place at the midway point of the two-day showdown. A lightning quick third-place run down the monster 17-corner German track put her closer to the podium fight.

“That third run was by far my best run in the two weeks that I was here. To come down .03 seconds behind Kaillie (Humphries) who set the track record was awesome for me,” said Appiah. “It was such a great way for me  to end a really weird season that we didn’t’ even think would be happen.”

Humprhies, sliding for the United States, won the women’s monobob race which will debut at the 2022 Olympic Winter Games, with a time of 3:59.62. Germany’s Stephanie Schneider was second at 4:00.12. Laura Nolte, also of Germany, placed third at 1:00.11.

Canada’s other developing pilot who won a bronze two weeks ago in the monobob, Melissa Lotholz of Barrhead, Alta., also impressed in seventh spot. The 2018 Olympic brakeman rebounded after clocking the 11th-fastest time in the opening heat with solid pushes and run times in the final three heats to place seventh at 4:02.21.

Lotholz and Appiah have sent a warning shot to the world to keep an eye on them on the track to Beijing 2022 with strong finishes since joining the World Cup circuit just over the last three weeks.

“If you asked me three weeks ago if I was a medal contender, I would have felt like a dark horse, but these last two weeks have given me a lot of confidence,” said Appiah, who was fastest at the start in every run – shedding fractions of a second off her start time in each heat.

“I knew my start was going to be my strength. All of the training I put together in the offseason, the sacrifices I made, is starting to pay off.  The key to the turnaround was the coaches sitting me down before the Igls race, and giving me a top brakeman in Dawn (Richardson Wilson) and one of the most competitive sleds. I knew this was an opportunity I couldn’t miss. If I didn’t capitalize on that I knew it could freeze my Olympic dream before it started. The Olympics started that week in Igls for me, and my confidence shot through the roof.”

Appiah was fourth in both the monobob and two-person women’s race in Igls. She was ninth in the World Championship women’s two-person bobsleigh race last weekend.

Meanwhile, Canada’s four-man sleds will also hold their heads high despite not sliding onto the podium at this year’s World Championships.

Justin Kripps (Summerland, B.C.) and his crew of Cam Stones (Whitby, Ont.), Ben Coakwell (Saskatoon) and Ryan Sommer (White Rock, B.C.) scrapped their way to fifth place with a four-run time of 3:36.95 down the 1,413-metre track.

“We put up a good fight, but I just made too many mistakes in the track,” said the 34-year-old Kripps. “This is still one of my best results in four-man here, and I learned a lot about how to drive four-man in Altenberg when the track is fast like this.”

“We achieved our goal of building momentum this season heading into the Olympic year. We medaled in most of the races and we know what we need to work on this summer, so it was a success overall.”

Team Kripps will be working tirelessly to close the gap on this year’s World Champions, Germany’s Francesco Friedrich, Thorsten Margis, Candy Bauer and Alexander Schuelller, who set the time to beat at 3:35.02.

The 2021 Bobsleigh and Skeleton World Championships were originally slated to be held in Lake Placid, NY, but were relocated due to international travel concerns related to COVID-19.