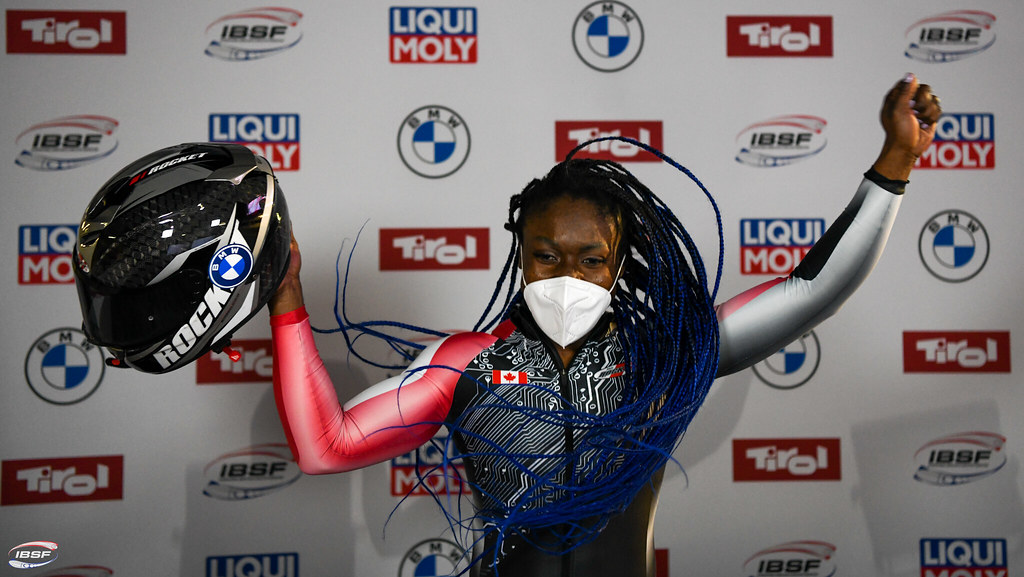 BEIJING, Chn.—Canada’s Cynthia Appiah struck first in the Canadian bobsleigh program’s mission for medals this year after sliding to the bronze in the women’s monobob race at the Test Event in Beijing, China on Monday.

The 31-year-old Torontonian rocketed to a two-run, third-place time of 2:10.46 at the Yanqing National Sliding Centre where the sport of monobob will make its Olympic debut in February.

“I am really happy with my performance but definitely hungry for more,” said Appiah following her first career podium finish at the elite level of the sport as a pilot. “I’m loving this track because it is very unique. It’s a very hard track to describe because I don’t think there is really anything like it in the world.”

Appiah, a developing pilot who is ready to compete full time on the World Cup circuit this year, sent an early warning shot to the world after clocking the first place start and down time in her opening rip down the 16-corner track. She clocked up another first overall start time in her second run, but dropped two spots into third after a costly mistake midway down the 16-corner track.

“I made a mistake on the second run that caused me to bleed some time, but I’m still ecstatic at how my first Test Event as a pilot has gone so far,” added Appiah, who finished fifth in the monobob race at the 2021 World Championships last season.

Germany’s Mariama Jamanka topped the women’s field with a golden time of 2:10.11. Switzerland’s Melanie Hasler slid to the silver-medal step of the podium at 2:10.19.

Appiah – a former brakeman who has pushed multiple Canadian pilots to the international podium – is one of the most gifted athletes on the international circuit. Proud of her Ghanaian roots, Appiah has been steadily mastering her craft since jumping into the pilot’s seat four years ago.

She has been following the path to the podium in the last Olympic quadrennial set by her Canadian teammate, Christine De Bruin – a 32-year-old from Stony Plain, Alta. who has two World Championship medals in this Olympic quadrennial De Bruin also enjoyed her best-ever monobob result on the Beijing track.

De Bruin finished just off the podium after climbing three spots in her final run, placing fourth place with a combined time of 2:10.54.

“I am super happy with how things went today – especially since I finished last in my first monobob race last season. I’m really starting to like this whole monobob thing,” laughed De Bruin. “This is my best result by far, and given that it is on the Olympic Track, gets me very excited for this upcoming World Cup season.”

Justin Kripps (Summerland, B.C.) and Cam Stones (Whitby, Ont.) blasted into the Olympic year with a fourth-place finish of their own in the men’s two-man bobsleigh race. The 34-year-old Kripps was steady in both heats, finishing .06 off the podium with a combined time of 2:00.95.

“I thought we had a good performance today. It was fun to be racing again and I really like the track here,” said Kripps – the reigning two-man Olympic champion. “This track has some very technical sections, and you have to be very precise to be fast here. I thought Cam and I pushed well, and my drives were pretty good. I made a couple of mistakes, but I’m happy with the progress we’ve made this trip.”

Calgary’s Chris Spring split his two runs between Ottawa’s Mike Evelyn and former CFLer, Sam Giguere of Sherbrooke, Que., on the brakes. Team Spring finished in 14th spot with a two-run time of 2:01.72.

Two Calgarians, Taylor Austin and Dan Sunderland, teamed up in the final Canadian men’s sled. Austin piloted the duo into 19th spot with a time of 2:02.36.

Germany’ Francesco Friedrich, who tied Kripps for Olympic gold in 2018, joined forces with Alexander Roediger to take top spot on the men’s podium Monday with a winning time of 2:00.80. Great Britain’s Brad Hall and Greg Cackett were second at 2:00.87. Russia’s Rostislav Gaitiukevich and Mikhail Mordasov took advantage of two fast starts to edge out Team Kripps, and snag the bronze medal with a time of 2:00.89.

The women’s and men’s skeleton races also took place on Monday in Beijing. Calgary’s Elisabeth Maier was the top Canuck in 13th spot with a time of 2:08.56. Jane Channell, of North Vancouver, was the only other Canadian on the start line of the women’s race and placed 22nd at 2:10.22.

Two Canadian men also suited up for the men’s race. Calgary’s 20-year-old Blake Enzie was in 15th spot after the opening run, but dropped to 23rd after struggling in his final heat, clocking-in at 2:07.29.

Germany’s Alexander Gassner won the men’s race with a time of 2:03.26.