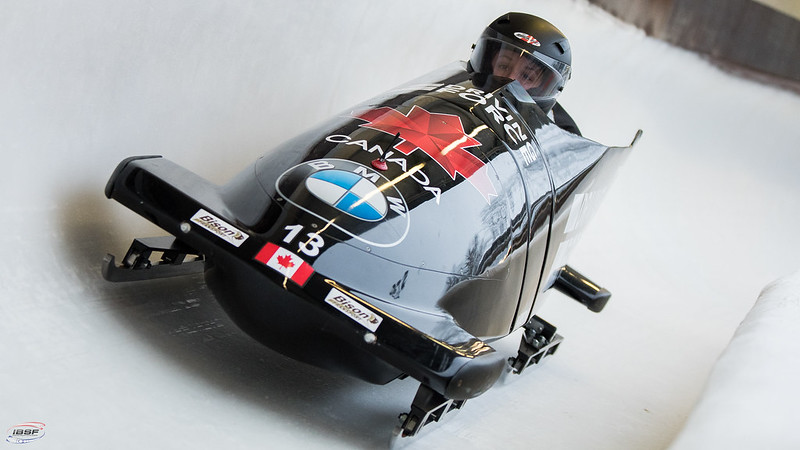 BEIJING, Chn.—Canadians Christine De Bruin and Kristen Bujnowski served notice they will be two names to watch on the track to the 2022 Olympic Winter Games after winning the bronze medal in the two-woman bobsleigh test event in Beijing on Tuesday.

Competing for the first time together in more than a year, the Canadian duo took advantage of lightning-quick start times in both runs and rocketed to a third-place time of 2:05.38 on the 16-corner track.

“I am loving this track,” said De Bruin (Stony Plain, Alta), who was fourth in Monday’s monobob race. “It has been so fun figuring it out. It has proven to be a mixture of a driver’s track and a push track.”

With Bujnowski – an explosive 29-year-old off the start block – providing the horsepower, and the experienced De Bruin who thrives on technical tracks in the driver’s seat, the Canucks bring the perfect ingredients to the Yanqing National Sliding Centre where they posted 5.39 at the start in both runs.

“It is an amazing start to the season. I knew our pushes were getting better, but I was not expecting the second- and fastest-start times today,” said Bujnowski, who posted record setting starts during testing in the Canadian squad’s training facility in Calgary this fall. “Christine and I have both improved physically, but this result shows the value of constantly pushing together for many years now. We really believe in each other, and I think we can expect a great season.”

The Canadians finished behind two German sleds on the podium. Laura Nolte and Deborah Levi won the gold with a time of 2:04.99. Mariama Jamanka and Vanessa Mark were second at 2:05.21.

With Bujnowski missing the 2021 season while staying home to nurse an injury, the 32-year-old De Bruin proved on Tuesday she has the ability to bounce back after coming off a challenging year.

“I had a hard time last year. Buj wasn’t able to join us on Tour, and with COVID, it just didn’t seem like anything would go our way,” said De Bruin. “To have her back, and to push the fastest time of the day, shows there is a lot of good stuff to come this season. It is a long season, so this is just one of many benchmarks to check off in our overall goals.”

Meanwhile, in the four-man bobsleigh race, Justin Kripps (Summerland, B.C.) drove just shy of the podium for the second-straight day.

Kripps and his crew of Ryan Sommer (White Rock, B.C.) Cam Stones (Whitby, Ont.) and Ben Coakwell (Saskatoon) clocked fourth-place times in both heats for an overall time of 2:00.02.

“Our goal going into every race is to battle for a spot on the podium, so walking away with a fourth-place finish isn’t exactly what we had hoped for,” said Ryan Sommer. “We had three really solid weeks of training here on the new track, and we were able to prepare and develop a game plan for the main event here later in February that we believe will lead to success when the time comes.”

Sitting in fourth place after their first blast down the Olympic Track, the Canadians were on the podium hunt in their final run after posting the second-fastest start time in the heat, but finished .13 seconds shy of the medals after completing the 1,615-metre track.

“As a crew, we know that we need to throw down four big pushes in February if we want to compete for a podium position. We have a lot of good things going so we are sticking to our game plan as we gear up for a long World Cup season which is just ahead of us,” added Sommer.

The German’s celebrated the top-two spots on the podium. Francesco Friedrich, Thorsten Margis, Candy Bauer and Alexander Schueller will be the sled to beat after posting a winning time of 1:59.23. Johannes Lochner, Christopher Weber, Georg Fleischhauer, and Christian Rasp were second at 1:59.53.

Tuesday’s races at the Yanqing Sliding Centre mark the end of the three-week International Training block at the Olympic track along with the official IBSF races. There were 20 teams competing in the 2-woman Bobsleigh and 18 in the 4-man Bobsleigh, with athletes from 16 nations taking part on the final day.