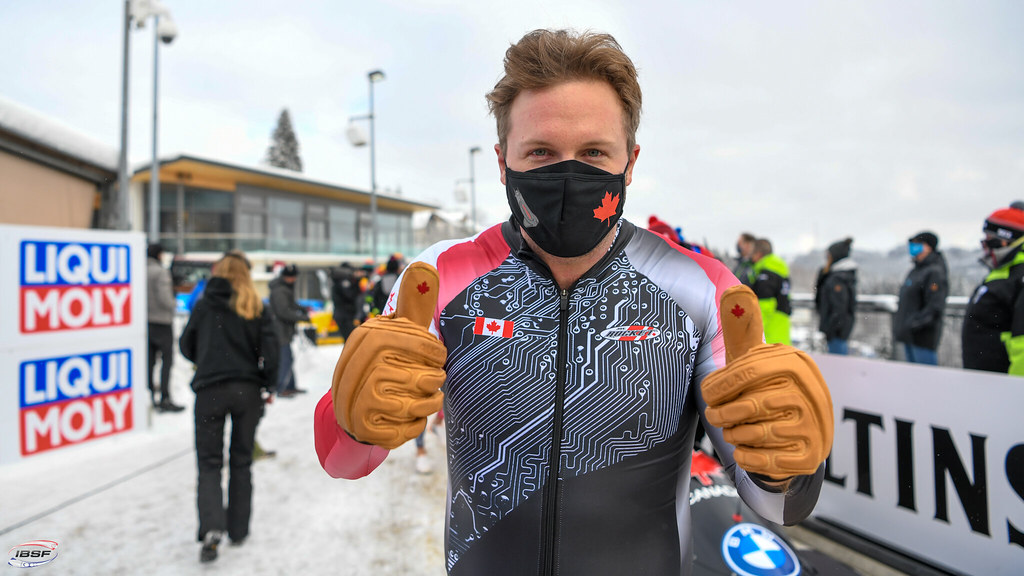 IGLS, Aut.—Three Canadian sleds made a charge for the podium in the World Cup bobsleigh opener on Saturday in Igls, Austria.

Cynthia Appiah (Toronto) and Melissa Lotholz (Barrhead, Alta.) proved they will be a force to reckon with on the final countdown to Beijing, finishing fourth and fifth respectively in the women’s monobob race. Justin Kripps (Summerland, B.C.) and Cam Stones (Whitby, Ont.) narrowly missed the podium in the two-man battle, placing fourth.

First off the block, Appiah clocked the fastest start time in each heat and was holding the fastest time in both runs down the 14-corner track until making a mistake near the bottom in both runs.

“Today was bittersweet. I didn’t realize how much going off first would get to me,” said the developing pilot who has been driving for just four seasons. “I was happy with my pushes but didn’t get on my D-rings soon enough, and that set the tone of the run from that point onwards.”

A third-place finisher in the monobob race at the Olympic Test Event in Beijing last month, the 31-year-old posted a two-run time of 1:50.73.

“Being in fourth after the first run was a great position given the mistakes I had made because I knew what I was capable and a win was well within the bag,” added Appiah. “Run two was much better but a mistake in corner nine wiped the big lead I had created and my chances of winning.”

Appiah was also fourth in the monobob at her World Cup debut on the Igls track last season.

She finished just off the podium behind two American and one German sleds on Saturday.

“Consistency will be the key for me to jump onto the podium,” added Appiah. “My pushes are so dynamic that I can create insurmountable leads, but the consistency is what will secure the win. Things are still tracking in the right direction. I’m still learning and developing as a pilot, but I’m consistently in the top-10 which isn’t something many can say as a young driver.”

Another developing Canadian driver who is putting pressure on the greatest women’s names in the sport threatened the podium in Igls.

Canada’s Melissa Lotholz, who was third in the monobob in Austria last year, finished in fifth place with a time of 1:50.74. Just a few weeks removed from her 29th birthday, Lotholz climbed two spots up the standings in her final run after rocketing to the second-fastest down time in the final heat.

The women’s monobob will make its Olympic debut at the Yanqing National Sliding Centre in February.

Justin Kripps and Cam Stones missed the World Cup podium by .01 seconds in the two-man competition, finishing with a combined time of 1:43.49.

The 34-year-old Kripps, was steady down the relatively flat 1,428-metre track that he has struggled to find the podium on throughout his illustrious career. Sitting in fifth place after the opening run, the Canucks jumped one spot on the leaderboard after clocking the third-fastest final run.

“I’m happy with this result because I haven’t had much success in the two-man here in Igls,” said Kripps, the reigning two-man Olympic champion. “Knocking on the door of the podium is a good sign for us. Cam produced some greats which helps here a lot.

“I made more than .01 seconds of mistakes down the track so we’re definitely capable of hitting the podium if we clean it all up.”

Germany’s Francesco and Alexander Schueller won the first World Cup race of the season with a time of 1:42.85. Johannes Lochner and Florian Bauer were second at 1:43.32. Brad Hall and Greg Cackett, of Great Britain, held off Team Kripps for the bronze medal with a time of 1:43.48.

Calgary’s Chris Spring teamed up with Ottawa’s Mike Evelyn in new Canadian sled to finish in eighth spot with a time of 1:43.80.

The two-woman and four-man bobsleigh races are slated for Sunday.