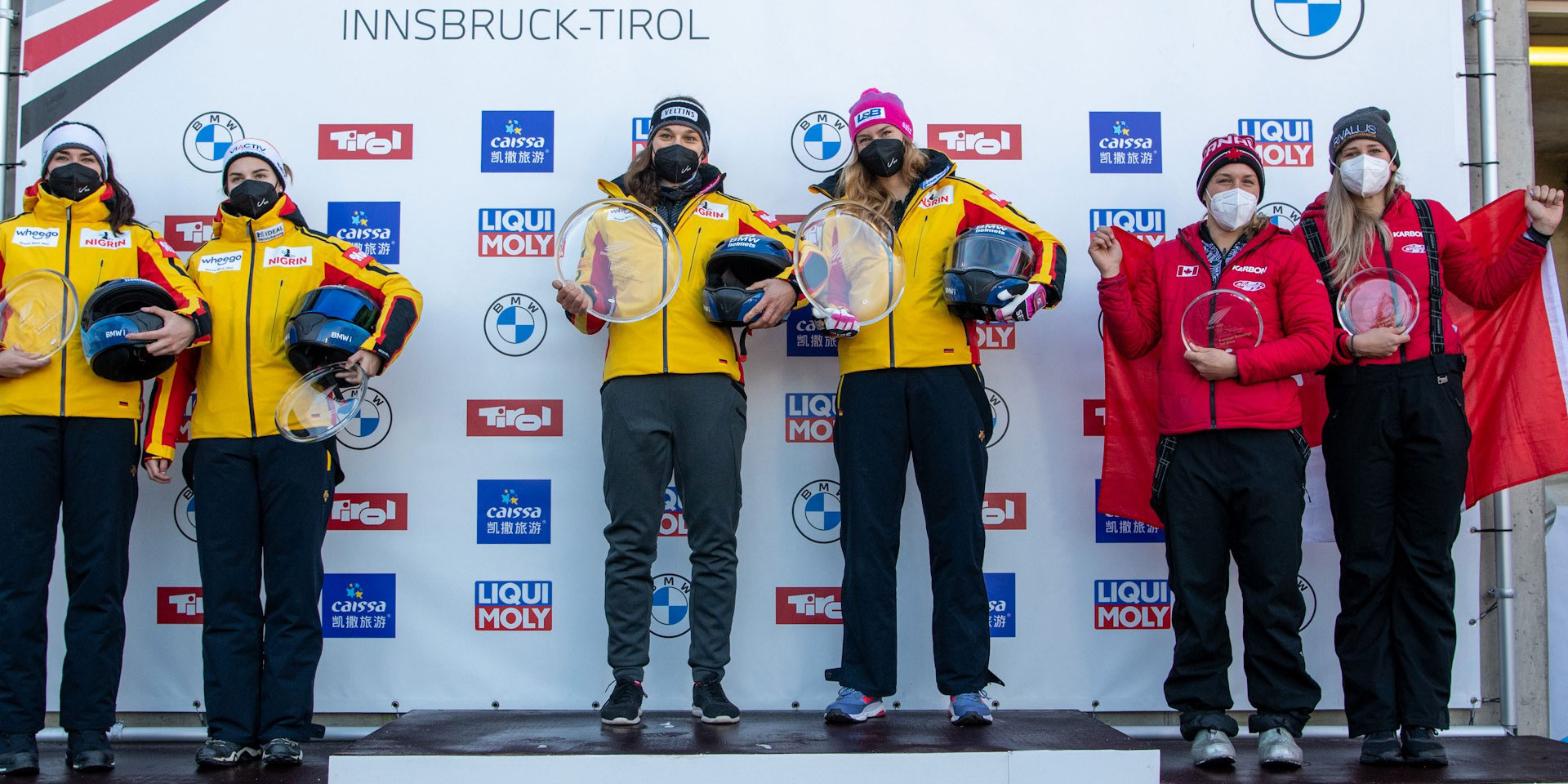 The Canadian duo, who also teamed up to win the bronze last month at the Olympic Test Event in Beijing, rocketed to a two-run, third-place time of 1:46.51.

“That race was all Buj,” beamed de Bruin following the podium ceremony. “She got us those start velocities and I just tried to keep the speed down the track. We are back.”

Known as a starter’s track in the sliding sport world, the relatively flat 14-corner icy chute puts a premium on the push. De Bruin, of Stony Plain, Alta., had the right woman providing the horsepower behind her sled on Sunday.

The 29-year-old Bujnowski, who has quickly developed into one of the most explosive brakewomen in the history of the Canadian program, took control in her Austrian office. Smashing start records in Calgary’s Ice House training facility this Fall, Bujnowski and de Bruin pushed the fourth, and top start times in Igls en route to the podium performance.

“I’m not used to getting top start times, but I definitely won’t get tired of it,” said Bujnowski, who excelled at CrossFit before taking up bobsleigh. “We had a couple of great pushes and impressive velocities, so I am really happy with that.

“The field is especially stacked right now, and I am pushing against so many brakewomen who are my idols, so it is awesome to stand amongst them.”

Germany’s Laura Nolte and Leonie Fiebig matched the Canucks at the start and held on to win the women’s race with a time of 1:46.22. Kim Kalicki and Anabel Galander, also of Germany, were second at 1:46.39.

The Canadians prevented a German sweep of the podium, edging out Mariama Jamanka and Kira Lipperheide by a hair.

“The last time we were here (Igls, Austria), we finished in fourth by a hundredth of a second and today we got third by the same margin,” said de Bruin, who added that Bujnowski missed the entire 2021 season while staying home to recover from an injury. “It feels so good to be reunited with Buj and carrying on our success from two years ago.”

“This is the first race week for me since February 2020 so it was a tiring one,” said Bujnowski, who was an alternate on Canada’s 2018 Olympic Team in her first year in the sport. “Today was a great start to our Olympic season. We have some things in mind for the upcoming weeks to conserve energy.”

Meanwhile, in the four-man bobsleigh race, Justin Kripps (Summerland, B.C.) piloted his sled to sixth place with a time of 1:41.92.

Kripps and his crew of Ryan Sommer (White Rock, B.C.) Cam Stones (Whitby, Ont.) and Ben Coakwell (Saskatoon) rebounded after a costly mistake near the bottom of opening run on the 1,428-metre track dropped them to  11th spot. Clocking the sixth-fastest start time in both heats, the hard-nosed Canucks climbed five spots in the final run with the fourth-fastest down time.

Germany’s Francesco Friedrich, Thorsten Margis, Candy Bauer and Alexander Schueller won with a time of 1:41.31. Brad Hall piloted his sled from Great Britain onto the podium for the second straight day. Hall and his crew of Nick Gleeson, Greg Cackett and Lawrence Taylor slid to the silver medal with a time of 1:41.57.

Chris Spring (Vancoouver) piloted the other Canadian sled. The three-time Olympian and his crew of Sam Giguere (Sherbrooke, Que.), and Ottawa boys – Mike Evelyn and Cody Sorensen – placed 13th at 1:42.34.

The Austrian track will host another string of World Cup races next week.