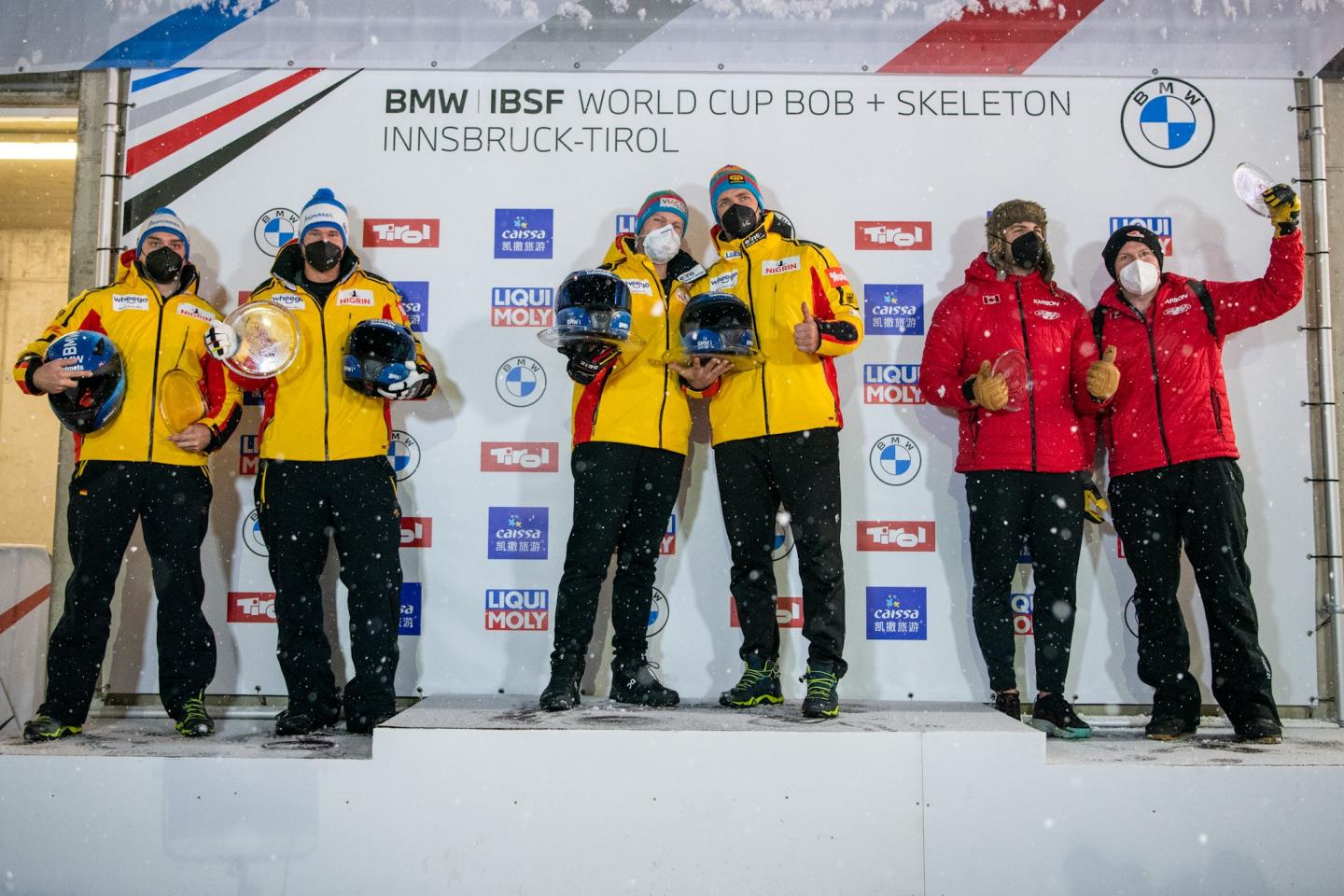 IGLS, Aut.— Justin Kripps and Cam Stones broke through to win the bronze medal in World Cup two-man bobsleigh on a track they have struggled on in Igls, Austria.

“We are always trying to be in the fight for the medals so being in the race with a shot at a medal made for a good day,” said Kripps. “I haven’t had much success here, so it was nice to get one.”

The 34-year-old Kripps (Summerland, B.C.), and Stones (Whitby, Ont.) slid to the two-man bobsleigh podium in Igls for the first time together, and just the second time ever in Kripps’ illustrious driving career. The Canadian duo clocked a two-run time of 1:43.96 on the flatter track.

“I thought we executed really well today. Cam had really good starts especially in the snow,” said Kripps, whose only other two-man medal in Igls came in 2017 when he and Jesse Lumsden claimed the silver.

It was the 18th career World Cup two-man medal for Kripps. Eight of them have come with the 29-year-old Stones in his sled since the two joined forces following the 2018 Olympics.

““This track is pretty much like an Ice House (start facility). You have to start in the top three or it is tough to get in the medals,” added Kripps. “We ran a bit deeper (off the start) than usual today. All of the teams pushing fast ran super far. On a track like this, you have to find the balance between pushing far and getting the steering in. And, you have to run especially far in the snow. We had two really good starts today and I was able to clean up my runs from last week as well.”

Chalking up the third and second-fastest start times resulted in the Canadian duo sitting in third spot after their first trip down the 1,478-metre Austrian track. After posting a 5.12 start, Kripps drove his way onto the podium with a nearly flawless final run down the 14-corner chute.

“It’s a great feeling to get on the podium. It’s a track we’ve traditionally not had success in the two-man, so it is a great result and those were incredible drives by Kripps,” said Cam Stones. “It gives us a lot of momentum and I can’t wait for another shot at the podium tomorrow with Ben (Coakwell) and Ryan (Sommer) in the four-man.”

The Canucks shared the podium with two German sleds. Francesco Friedrich and Thorsten Margis took top spot with a time of 1:43.48. Johannes Lochner and Christian Rasp clocked-in at 1:43.84 for the silver medal.

The 32-year-old de Bruin, who has bronze medals in her first two starts in two-women action, matched her career-best monobob finish in fourth place with a time of 1:51.80.

“I had two main goals today – to drive Kreisel and corner nine well. I told myself the result didn’t matter and that if I did those two things well today, I would be happy,” said de Bruin. “I accomplished those goals so overall I’m very happy and excited for next week’s race in Altenberg.”

The leader of the Canadian women’s team has struggled to find her groove in the monobob since the new race discipline was added to the regular World Cup schedule last year.

“I have had a lot more practice in the monobob since last year. Our team went to Whistler at the end of the season and did a bunch of runs where I really started to get the hang of it,” added de Bruin. “I couldn’t really get a feel for it during the season when we only get two runs before racing and I was struggling with a hip injury, so my pushes were way off. I am feeling much more comfortable this year.”

Toronto’s Cynthia Appiah has also felt comfortable in the monobob. The most explosive starter in the world, who was third in the monobob at the Olympic Test Event in Beijing, finished in the top-five for the third-straight race. Appiah placed fifth on Saturday with a time of 1:51.83.

With fractions of a second separating them from the medals, the Canadians are closing the gap on the podium. Elana Meyers Taylor, of the United States, hung on to win the women’s monobob for the second-straight week with a time of 1:51.60.

Germany’s Laura Nolte was second at 1:51.65, while Australia’s Breeana Walker topped de Bruin for the bronze medal with a time of 1:51.79.

Ottawa’s Mirela Rahneva and Jane Channell (North Vancouver) finished in the middle of the pack in women’s skeleton racing on Friday.

“It’s been a great couple of weeks of sliding here in Austria. I have been making small improvements and just focusing on getting back into racing shape,” said Rahneva who did not race last season due to an injury. “I’m happy to be here and hoping to keep chipping away and fine tuning my sliding.”

Mark Lynch, of St. John’s, Nfld., was the lone Canadian to hit the start line in the men’s race, and finished 26th.