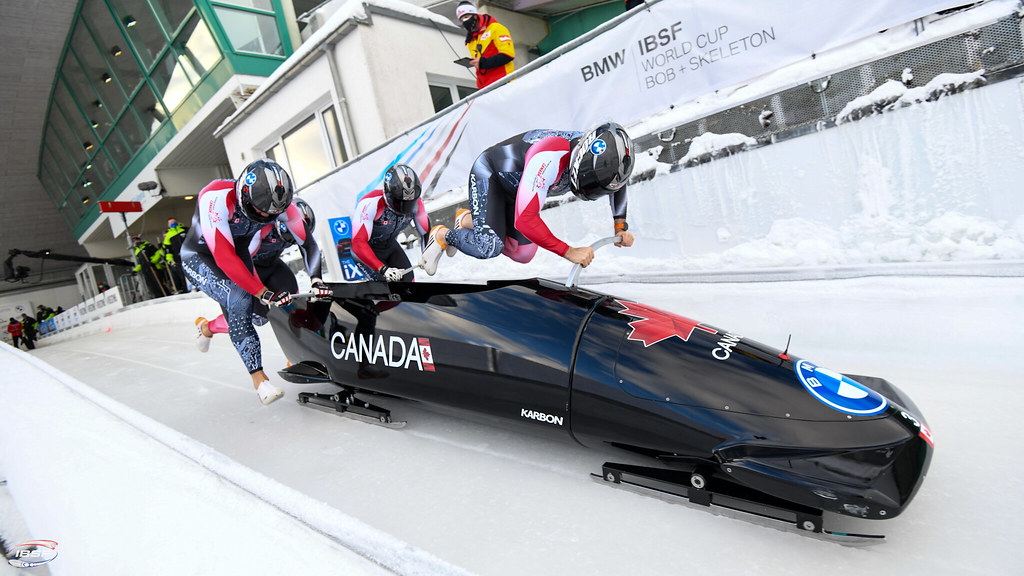 Christine de Bruin (Stony Plain, Alta.) and Kristen Bujnowski (Mount Brydges, Ont.) won their third bronze medal in the early two-women bobsleigh season, and second in as many weeks on the Austrian track. Justin Kripps (Summerland, B.C.) piloted his four-man Canadian crew to their first podium of the season.

Canada’s de Bruin and Bujnowski mixed together two, top-four pushes with consistent drives on the 14-corner starter’s track to clock a two-run time of 1:46.86.

“We continue to do our best to be consistent each time we go down the track,” said the 32-year-old de Bruin. “I had the same goals today – drive well and push fast. We were able to do that and come out with a medal. We are hungry for more and will continue to find ways to get us faster and higher on the podium.”

The Canadian duo, who also teamed up to win the bronze at the World Cup opener last week in Igls and at the Olympic Test Event in Beijing, were sitting in second spot after their first blast down the 1,478-metre track, but dropped one spot on the podium after clocking the fourth-fastest final run time.

“We were hoping to upgrade the colour of the medal this week, but can’t complain about being back on the podium,” said the 29-year-old Bujnowski, who has developed into one of the top brakewomen on the elite circuit in just four years. “Christine has been driving so well and our pushes have been strong, so we are really excited for a more technical track like Altenberg next week.”

The Canadians, who now have five World Cup medals to their credit along with two World Championship podiums, will continue to be fighting to close the gap on the dominant Germans who took the top-two spots on the women’s podium Sunday.

The Canadian track to the podium continued in the men’s race with Justin Kripps’ crew of Ryan Sommer (White Rock, B.C.), and Olympic teammates Cam Stones (Whitby, Ont.) and Ben Coakwell (Saskatoon) sliding to their third-ever four-man podium in Igls with a time of 1:42.10.

“It was a really tight race, and we are happy to come away with a medal,” said Kripps, who also won the bronze in Saturday’s two-man event. “The runs and pushes were pretty good with just a couple of little mistakes. It’s a great sign for us to be able to move up from sixth (first run) to third. Getting two medals here on a track that we have traditionally not done well on is big for us.”

It was the 12th career four-man podium for the 34-year-old Kripps, and just his third on the 1,478-metre track in Igls which puts a showcase on the brakemen at the start. His four-man crew also won the bronze in Igls one year ago.

“We were really happy to fight back after a rocky start to the season,” said 28-year-old brakeman, Ryan Sommer. “We wanted to give Kripps two competitive pushes in this snow race, and he worked his magic up at the front of the sled to get us back on the podium. We were hungry to get back into the medals and this will motivate us to chase more podium finishes in the weeks to come.”

Kripps, Sommer and the Canadian crew have now racked up nine, four-man podiums in addition to their bronze at the 2019 World Championships since hopping into the same sled together following the 2018 PyeongChang Olympic Winter Games.