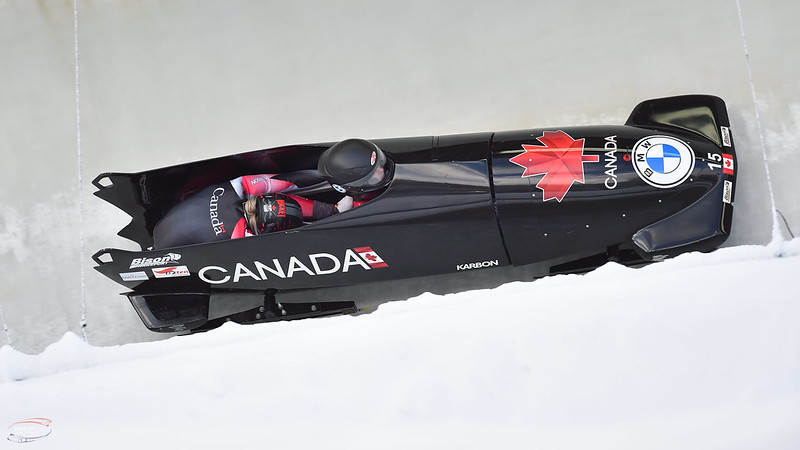 ALTENBERG, Ger.—Christine de Bruin and Kristen Bujnowski extended their podium streak after winning their third bronze medal in as many races on the World Cup bobsleigh season Sunday.

The Canadian duo moved into third spot in the overall World Cup two-woman bobsleigh standings after clocking a two-run time of 1:54.45 on the 17-turn beast of a track in Altenberg, Germany.

“It’s always great to podium on a German track so we are happy, but also very hungry to climb even higher on the podium,” said de Bruin, who also won a bronze at the Olympic Test Event in Beijing in October with Bujnowski.

The Canucks finished .35 seconds behind Americans Kaillie Humphries and Kaysha Love (1:54.10). Germany’s Laura Nolte and Deborah Levi were second at 1:54.14.

De Bruin, a 32-year-old from Stony Plain, Alta., has had her share of podium celebrations with Bujnowski (Mount Brydges, Ont.) at the Altenberg stop on the World Cup circuit.

Two of their six career World Cup medals have come at the German track, which is regarded as one of the most challenging bobsleigh tests in the world. The Canadian duo captured their first World Cup medal – a silver in 2019 – in Altenberg. One year later they also celebrated their second-career World Championship bronze medal on the 1,413-metre German chute.

“Altenberg used to be one of my favourite tracks, but as I’m getting older, it just hurts,” laughed de Bruin. “The pressures (in the corners) are a lot here, but it is always fun coming here because it is such a huge challenge.”

Altenberg hasn’t always been a joyful place for de Bruin, who has proven this year she and Bujnowski are a medal threat regardless of the types of tracks thrown at them. With Bujnowski sidelined with an injury lats year, the 2018 Olympian struggled to a 16th-place finish in both the two-woman and monobob races at the 2021 World Championships.

“This weekend was redemption for Christine and I’m so proud of her. I know it wasn’t easy for her to come back here after those results at World Championships last season,” said the 29-year-old Bujnowski, who has been the force behind de Bruin’s sled each week at the start of the track on the journey to Beijing. “She really wanted to prove to herself that she is good here and I thought she did amazing.”

Chris Spring (Vancouver) piloted the other Canadian sled. The three-time Olympian and his crew of Sam Giguere (Sherbrooke, Que.), and Ottawa’s Mike Evelyn and Cody Sorensen – placed 11th with a time of 1:49.28.