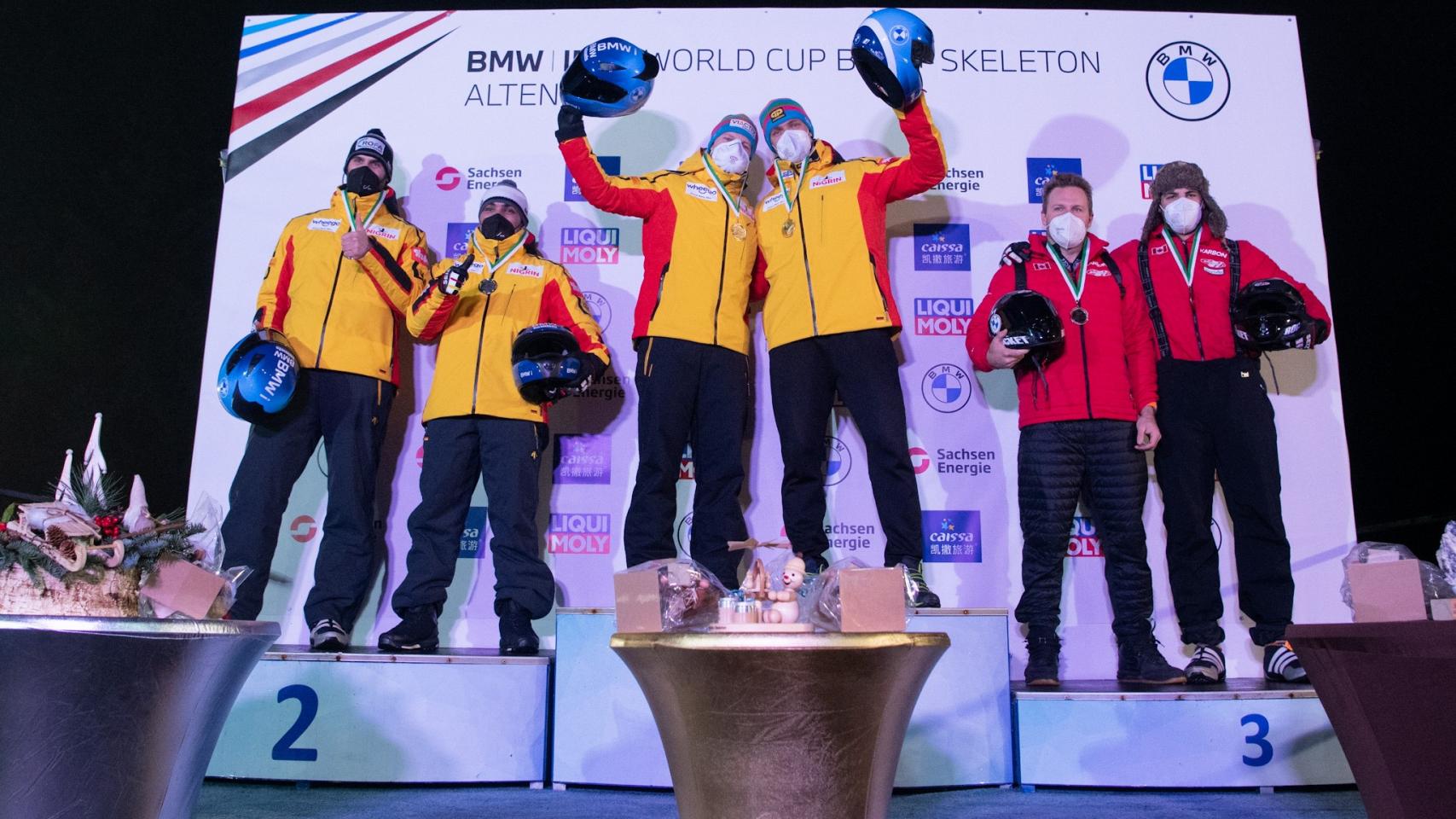 ALTENBERG, Ger.—Canada’s bobsleigh athletes won a complete set of medals in women’s monobob and two-man action at the World Cup in Altenberg, Germany on Saturday.

Two Canadian women’s bobsleighs shared the World Cup podium for the first time in more than a decade.  Christine de Bruin (Stony Plain, Alta.) celebrated her first World Cup victory, while Cynthia Appiah (Toronto) slid to the silver in a hard-fought Canadian battle on one of the toughest tracks on the planet.

It was the first monobob medal for the 32-year-old de Bruin who clocked a winning time of 1:59.96. She has slid to the two-woman podium six times on the World Cup and twice at the World Championships throughout her career.

“I’m still in shock,” stated de Bruin. “I thought for sure I would get my first win in the two-woman, not monobob, but it feels great and shows that we are right on track.”

Sitting in second place, just 0.01 behind her teammate Appiah after the first run down the nasty 1,413-metre track, the 2018 Olympian improved her start time by .05 in her second run and was steady while navigating each of the 17 corners to lock up the victory.

“It’s great to have Cynthia and Melissa (Lotholz) here on the World Cup. Both girls are phenomenal push athletes, and both raced with me before starting to drive in 2018. It’s awesome to see them both develop into world class drivers now, and that has pushed me to be better as an athlete as well.”

The 31-year-old Appiah bettered her own push record in Altenberg, chalking up a 5.93 at the start of the second run, but a costly mistake near the bottom of the track cost her the gold medal, finishing with a time of 2:00.09.

“I’m super happy to have won my third medal in a row, but super disappointed with my second run. Things started to snowball and despite fighting back in each corner, it wasn’t enough to hold onto the lead,” said Appiah, who moved into top spot in the overall World Cup monobob standings thanks to two silvers and one bronze medal in her last three races.

“I’m very confident that I can medal in every race. I know my starts are killer, and I can cash in on that advantage that I give myself if I put down two decent runs each race.”

Kaillie Humphries, of the United States, finished third at 2:00.15.

“It’s always fun to share the podium with your teammate,” added Appiah. “Christine put down two solid runs today to win her first monobob medal so that was awesome to be a part of.”

Melissa Lotholz (Barrhead, Alta.), who like Appiah is a rookie pilot on the World Cup circuit this year, slid to ninth place with a time of 2:00.79.

Sitting in seventh place after the first run down the icy chute, the 34-year-old Kripps mixed the third-fastest push with nearly flawless driving to throw down the fastest second-run time (55.26) and claim third spot at 1:50.68.

“We didn’t have the best draw going off 13th on the first run. The track frosted up a bit and I had a mistake at the bottom, but the second run was more even and we stepped up with a big push and a good drive,” said Kripps.

It was the 19th career World Cup two-man medal for Kripps. Nine of them have come with the 29-year-old Stones in his sled since the two joined forces following the 2018 Olympics. The Canadian duo dug deep on the starting block Saturday, posting the top-four push times in both heats.

It was the third World Cup two-man medal in Altenberg for Kripps. He won the 2018 race before finishing second the following year.

“It is always great to get a medal here because it is always so tough to win Altenberg,” added Kripps.

It was another stellar day on the Altenberg track for Canada’s Chris Spring (Vancouver) and Mike Evelyn (Ottawa). The Canadian duo finished fourth in Altenberg for the second time this season, clocking a two-run time of 1:50.70.

It was nearly 10 years ago Spring experienced a horrific crash during a training run on the challenging Altenberg track that sent he and his crew to hospital on January 5, 2012. While the multiple World Cup medallist has competed on the track many times since, last year many of the top German pilots helped him conquer the past by providing advice on how to commandeer the 17-corner chute. The learnings propelled the Aussie-born Spring to rattle off three medals at a Europe Cup stop last season.