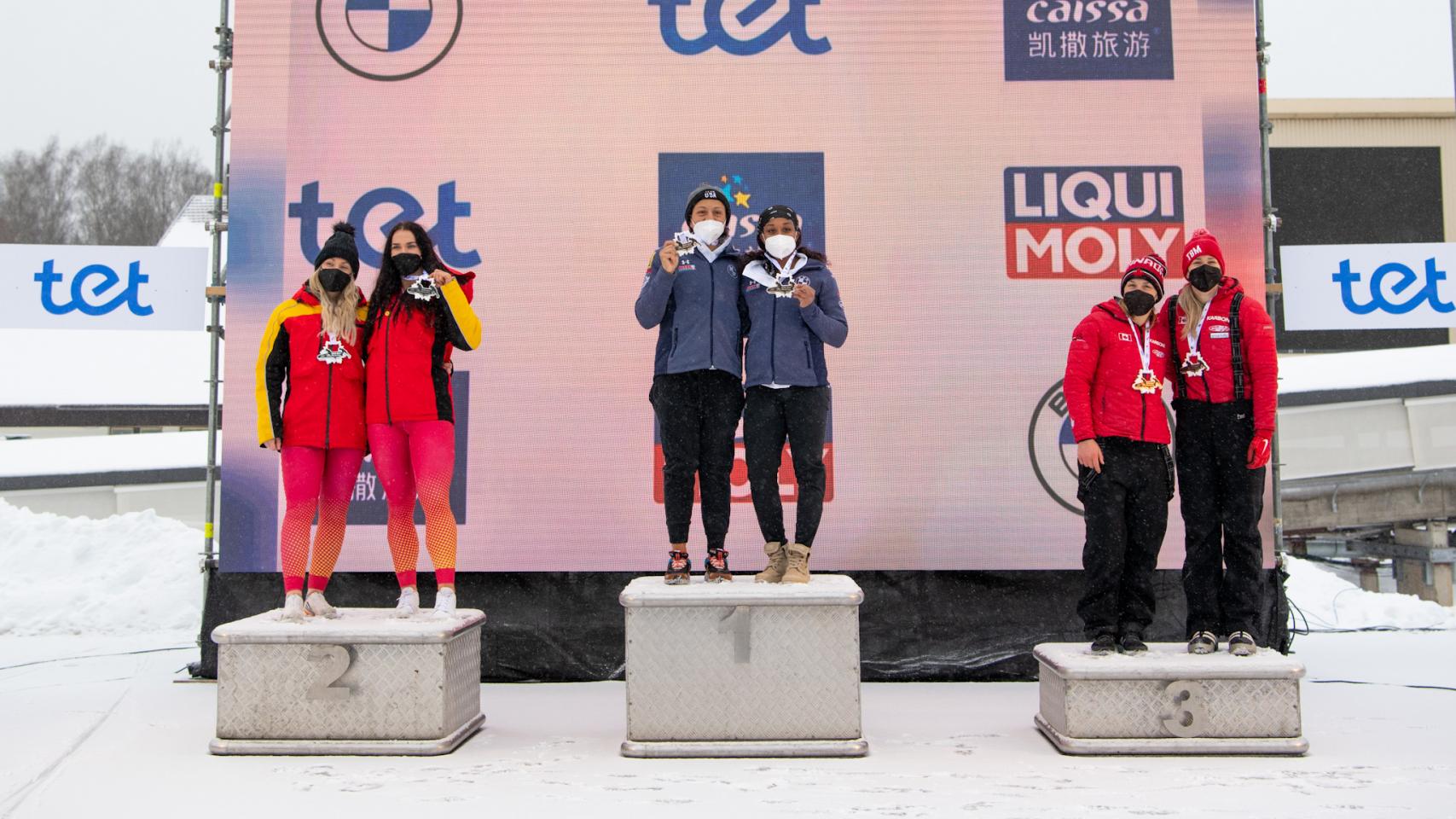 Feeding off a gold medal in the women’s monobob, the Canadian duo clocked a third-place time of 1:42.12 on the 16-corner track to secure the seventh World Cup medal together since hopping into the same sled following the 2018 Olympics.

“Mission accomplished,” beamed the 32-year-old de Bruin after climbing onto the podium in both races on the same weekend for the first time of her career.

“We wanted to work on our consistency and rack up some points to prepare for Beijing, and we did just that. We were consistent in our pushes and in driving down the track, so we are happy with that.”

De Bruin (Stony Plain, Alta.) and Bujnowski (Mount Brydges, Ont.) were in fourth spot after their first rip down the 1,420-metre track. They battled to the bronze medal step on the podium after posting the second-fastest start time (5.34) and top down time at 51.11 in the final heat.

“Our push times were very close today and being second ranked on our second push was exciting. Every time I have pushed here, I have felt very comfortable and confident. I think the profile suits us well,” said the 29-year-old Bujnowski.

The Canucks finished .24 seconds off the leading pace set by Elana Meyers Taylor and Lake Kwaza, of the United States (1:41.88). Mica Mcneill and Adele Nicolle, of Great Britain, edged out the Canadians for the silver medal with a time of 1:42.10.

With 11 of their teammates and three staff members in COVID protocols this week in Latvia following an outbreak in the Canadian team, the bronze medal triumph was extra special for the Canadian sled.

“We didn’t put a lot of pressure on ourselves today. This week was really hard. We were worried about our teammates and stressed about our own COVID test results all week so we were just grateful to be able to compete,” added Bujnowski.

De Bruin has been on quite a run throughout the Olympic season. The 2018 Olympian now sits first overall in the World Cup monobob standings thanks to her back-to-back victories and is now second overall in the two-woman standings.

“It will be very important (to have a high ranking) in Beijing because it seems like the ice deteriorates quickly there so we need to stay high in the ranks to give us the best shot at an Olympic medal,” said de Bruin.

In the two-man race, Justin Kripps (Summerland, B.C.) and Cam Stones (Whitby, Ont.) struggled to find the fast line down the Sigulda track, finishing in eighth spot with a time of 1:39.89.

Germany’s Francesco Friedrich and Thorsten Margis slid to the top spot on the podium with a time of 1:39.16. Brad Hall and Nick Gleeson, of Great Britain, claimed the silver at 1:39.22. Latvia’s Oskars Kibermanis and Matiss Miknis chalked up the third fastest combined time at 1:39.71.

The World Cup now travels to back to Winterberg, Germany.