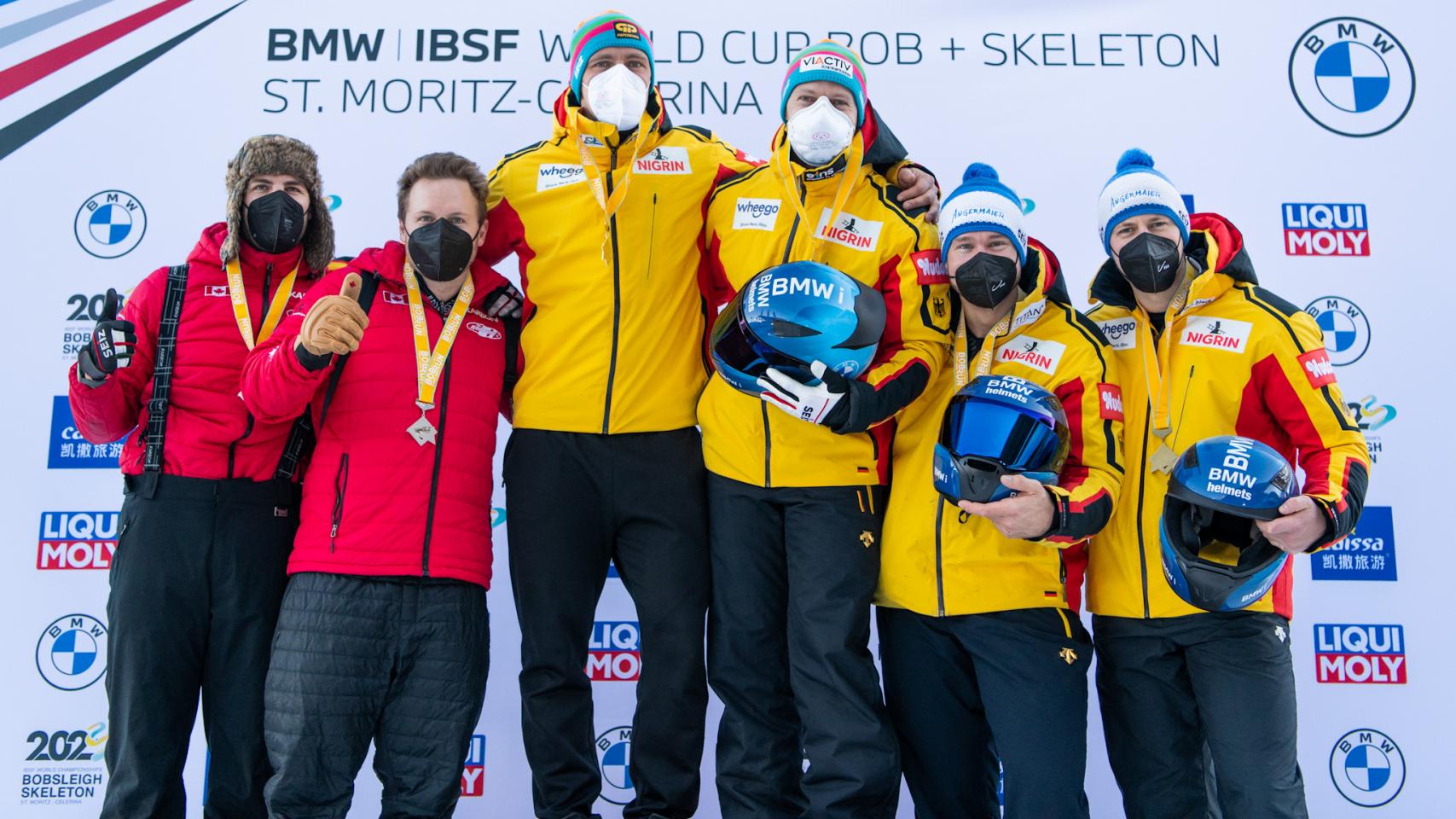 ST.MORITZ, Sui.—Canada’s bobsleigh team celebrated a silver and bronze medal at the holy grail of sliding tracks in St. Moritz, Switzerland on Saturday.

Justin Kripps (Summerland, B.C.) and Cam Stones (Whitby, Ont.) teamed up to win the two-man silver, while Cynthia Appiah capped off a dream rookie World Cup season in the monobob with a bronze medal.

Kripps and Stones wrapped up the two-man World Cup season with their best-ever finish at the birthplace of the sliding sports. The Canadians clocked a two-run, second-place time of 2:11.95 on the 1,700-metre sheet of natural beauty. Kripps and Stones were third on the only naturally refrigerated ice track in the world one year ago.

“It was an awesome race today and it doesn’t get any better than racing on a day like this in St. Moritz,” beamed the 35-year-old Kripps following his 21st career two-man medal. “Cam had some great start times and I felt really good on the track today. We are really happy to come away with the silver medal today.”

The Canucks were feeling it on the starting block and through each of the 19 corners on the track that twists and turns down to the finish in the town of Celerina. Sitting in third spot after the first heat, the 29-year-old Stones provided the horsepower for Kripps to put down a new track record (1:05.80) and the fastest time in the final heat, jumping them into second spot.

“It was such a fun day of bobsleigh and a privilege and honour to be in Justin’s sled on this track,” said Stones following his 11th career two-man medal. “To be successful in St. Moritz is such a bonus. Justin’s runs were the best I’ve ever been a part of, and to finish with a track record, silver medal and a Crystal Globe feels so good.”

The Canadian duo also wrapped their arms around their third two-man Crystal Globe which is handed out to the top-three sleds in the Overall World Cup standings. In addition to the silver on Saturday, Kripps and Stones battled to three bronze medals over the eight-race two-man season.

“Finishing second in the overall feels amazing. It came right down to today’s race in the battle for second,” said Kripps, the reigning Olympic two-man champion. “Being able to perform under pressure like that, and to have our best overall finish together, is a great sign for Cam and I heading into the Games.”

Germany’s Francesco Friedrich locked up the overall title with his seventh victory of the season. Friedrich and Thorsten Margis posted a winning time of 2:11.76. Germany’s Johannes Lochner and Florian Bauer were third with a two-run time of 2:12.12.

Earlier in the day, Cynthia Appiah put an exclamation mark on a dream rookie season by winning the bronze medal in the final monobob race in St. Moritz.

Posting the third and fastest start times in her two runs, the 31-year-old Appiah battled to an impressive bronze-medal finish and a combined time of 2:23.22.

“This gives me so much confidence to end the monobob season with another podium, especially on the historic St. Moritz track,” said Appiah. “Leading into this week, I had never driven the track before so to finish with a medal has put some extra wind in my sails heading towards Beijing.”

Toronto’s Appiah finished her breakthrough season on the podium with two American sleds. Kaillie Humphries was first at 2:22.27, while Elana Meyers Taylor slid to second place at 2:22.31.

Appiah also locked up third spot and her first Crystal Globe in the Overall World Cup monobob standings. In her seven races this season, Appiah never finished outside the top-five. She grabbed two silver medals, two bronze medals, and also had a fourth and two, fifth-place finishes.

“I tried not to think about my ranking over the season but when I was first in the world after the second in the Altenberg race, my new goal was to try and maintain that,” added Appiah. “Although I didn’t win the overall, to finish third in points in my rookie season is a sign of things to come over the course of my career and heading.”

All three Canadian women monobob sleds were a force to reckon with in the Olympic season. Christine de Bruin finished fourth overall thanks to two victories and two fourth-place finishes. Melissa Lotholz was eighth.

The World Cup season wraps up on Sunday in St. Moritz with the two-woman and four-man bobsleigh events.