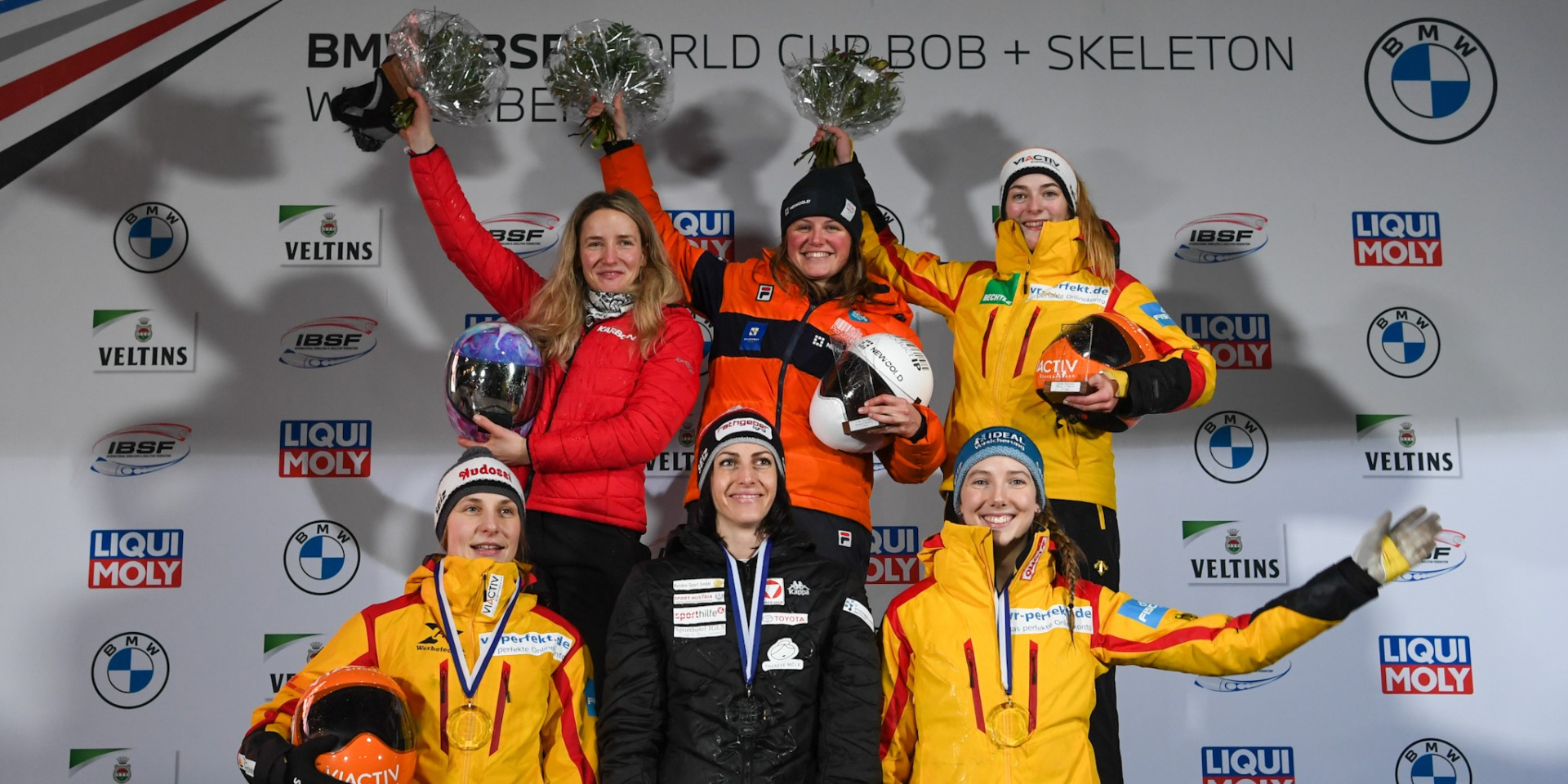 WINTERBERG, Ger.—Canada’s Mirela Rahneva got the New Year off to a medal-winning start, claiming the silver at the skeleton World Cup in Winterberg, Germany on Friday.

The two-time Olympian clocked a second-place combined time of 1:57.24 for the 13th podium finish of her career on the World Cup.

“Anytime you can get on the podium then I’m definitely smiling,” said Rahneva following the awards ceremony. “I’m happy to be top-three any day.”

It was the fourth podium finish for the 34-year-old Rahneva on the 1,330-metre German chute. The overall World Cup bronze medallist in 2019 and 2017 won the bronze last year in Winterberg. She also won silver on the track recognized for its tricky weather conditions in 2020. Her first World Cup podium on a European track also came in Winterberg when she claimed the bronze in 2017.

“Winterberg is a really gentle gliders track. It is a really nice, gentle track, and that is my preferred kind of driving. It is really intuitive,” said Rahneva. “I just really, really enjoy sliding here. When I enjoy the track, it is a lot easier to relax and let it fly a little more.”

The Ottawa resident was flying in her two descents down the 15-corner track.

Rahneva was poised to capture her second victory of the season after clocking the top time in the first heat at 58.60.

A sall mistake near the bottom of the track in her final run was enough to drop her into the silver-medal position behind Kimberley Bos (The Netherlands) who posted the top time of the day at 58.50. Bos edged the Canadian by .06 seconds, clocking the winning time at 1:57.24.

“The first run I had a really good start position being fourth off. We knew the ice deteriorated through the men’s race so I really took advantage of that in the first heat,” said Rahneva. “I just made a mistake in corner 11 and was trying to clean things up in the second run. First would have been nice, but was really aiming for top-three, so I’m really happy to be on the podium.”

Germany’s Hannah Neise slid to the bronze medal with a time of 1:57.34.

Rahneva has consistently slid to the top of World Cup standings on the elite international circuit since making her return to the World Cup last year – a run that was highlighted by a fifth-place Olympic finish at Beijing 2022. She missed the previous season with a neck injury.

“It’s been a two-year transition to getting back into top form. Success for me right now is achieving the goals I set out for myself. I know I’m not strong on all of the tracks around the world, so being realistic with my expectations is important,” added Rahneva. “Any day I can get it all out and leave everything on the track is success. I’m out to have fun in this first year after the Olympics so I just want to enjoy every stop.”

Jane Channell, another one of Canada’s top skeleton athletes who has been battling her way back into elite form that saw her finish third overall in 2016, clocked a 10th-place time of 1:58.20 on Friday.

“So far, this season has been tough. There has been a lot of uncertainty and I feel like it’s been reflected in my sliding,” said Channell, who has been enjoying the challenge of sliding on a new sled this year. “I have some good moments but also some very tough ones. Today’s race was a step in the right direction. The weather made for difficult conditions all week as well as in the race.”

Calgary’s Jaclyn Laberge was 21st in the women’s race and did not qualify for the final heat.

Bobsleigh races will hit the starting block on Saturday in Winterberg.