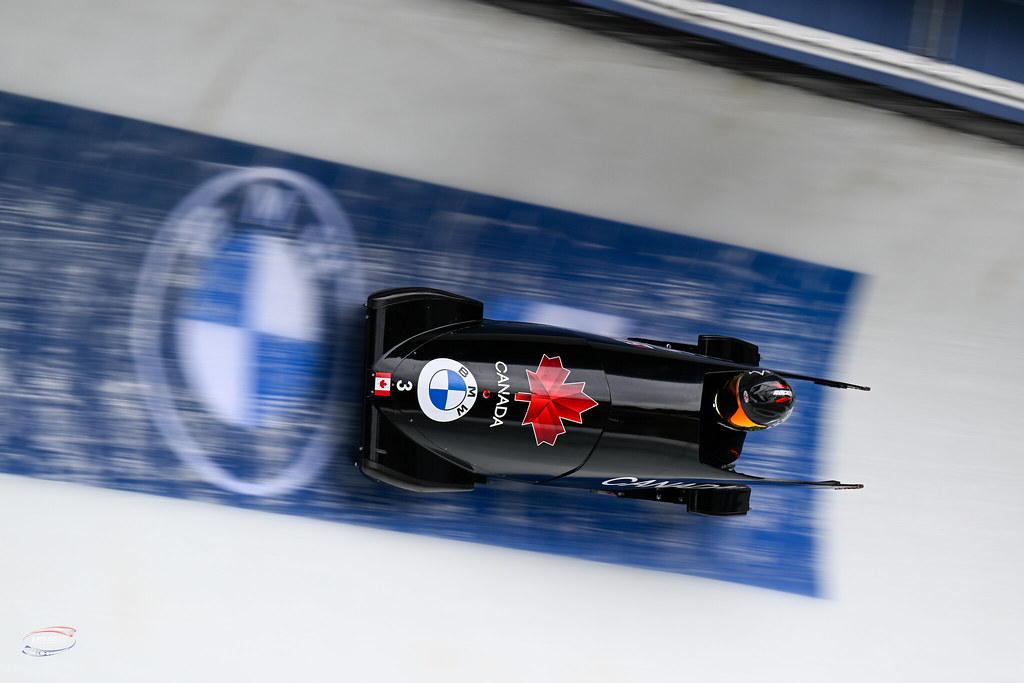 ALTENBERG, Ger.—Cynthia Appiah battled to her third World Cup monobob podium of the season, winning the bronze medal on Saturday in Altenberg, Germany.

Posting the first and second-fastest start times in both heats, the Torontonian blasted to a third place of 1:58.86 on the intimidating 17-corner track.

“It feels amazing to be back on the podium again”, said Appiah, who holds the women’s monobob start record at 5.93 in Altenberg. “My runs weren’t the greatest but it’s a step up from the runs I put down last year during the two World Cups here so I’m taking the little wins as they come.”

The 32-year-old Olympian knows how to get it done in Altenberg.

“This track is a drivers track so you have to be on your toes every step of the way, from the start until the exit of corner nine. You are constantly driving and have no breaks. Once you are through the straightaway from Kreisel until the finish, it’s another barrage of corners. It’s distinct from other European tracks but I’m always up for the challenge,” said Appiah.

The first two World Cup podiums for the second-year pilot – both silvers – came on the gnarly 1,413-metre icy chute one year ago. She posted the third-fastest times in both runs on Saturday.

“Despite how difficult it is to get down, I really love the Altenberg track.,” added Appiah. “Having lots of success on this track means a lot to me because it’s known as one of the most difficult tracks on circuit, that even seasoned veterans have had their issues on. It gives me a lot of confidence to continually podium despite how far back I am with my consistency in driving.”

It was the third monobob podium of the season for Appiah. The determined Canuck won a silver at the season opener in Whistler. She backed that up with a bronze the following week in Park City.

“I’m content with where things are at, but I had hoped my season would be better at this time in the circuit,” said Appiah. “But it’s a post-Olympic season and I’m constantly evolving in my craft. I’ve had to learn not to be so hard on myself and not expect perfection all of the time.”

Taylor Austin teamed up with Shaquille Murray-Lawrence (Scarborough, Ont.) in the lone Canadian sled for the two-man race.

The 32-year-old Austin and Murray-Lawrence squeaked into the top-10 with a ninth-place finish and a time of 1:51.64.

Germany’s Johannes Lochner and Georg Fleischhauer won the two-man bobsleigh race with a time of 1:50.26. Brad Hall and Lawrence Taylor, of Great Britain, claimed second place after stopping the clock at 1:49.63.

Francesco Friedrich and Alexander Schueller took third spot after stopping the clock at 1:50.26 over two runs.

The two-woman and four-man bobsleigh races will take place on Sunday in Altenberg.